This is our premier fundraising event and takes place each August, drawing enthusiastic owners and fans from far and wide. This year's event is on the 18th - see www.tewkesburycvf.org - for further information. 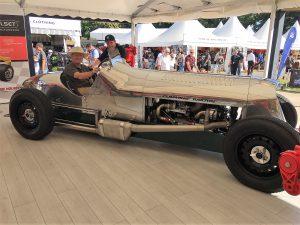 The following article, by Immediate Past President Anthony Stockman, first appeared in the September 2018 edition of Tewkesbury Direct.

What a spectacular day! Once again, we were lucky with the weather and although it looked a bit gloomy first thing, it soon brightened up into a beautiful day and the crowds just kept coming! This year, in order to keep pace with the ever mounting costs of putting the show on, (pushing on to over £8000.00), we found it necessary  to charge every person, classic car drivers included, a small entry fee of £5.00 if pre-booked on-line or £7.50 on the gate. This is the first increase in the gate price since we started 10 years ago. Although there were one or two mumblings about the charge (and I mean a tiny percentage), we were completely filled to capacity by lunch-time.  It should be remembered that all proceeds collected, go to benefit our many charities and every Rotarian plus the helpers give their valuable time freely , which without them there would be no show.  And what a show it was! Project Bloodhound took centre stage and drew a good deal of interest, as did Alan Millyard’s wonderful ‘Flying Millyard’ 5 litre V-twin motorcycle. Alan is an amazing creative genius and made the engine using 2 cylinders from Pratt & Whitney radial aircraft engine. He made absolutely everything including the carburettors for this unique machine, which started first kick and thumped like a dump truck! He even brought along his ‘modified’ Kawasaki KH500, with 2 extra cylinders added to an extended crank case; this was a 5 cylinder 900cc 2 stroke, which apparently tops 110 bhp at the rear wheel!

Next in line was Doug Bond’s 8 litre ‘Top Fuel’ Dragster, which was parked centre stage in the arena and attracted a huge crown when fired up – the noise was insane, but crisp and sweet when the throttle was momentarily opened. A big thankyou to Doug for bringing it and demonstrating the power needed to reach 225 miles an hour in a quarter of a mile from a standing start.

And just after lunch Terry Clarke rolled up in his re-creation of John Cobb’s 1933 Napier Railton land speed record car, (which in its time achieved then record breaking speed of 163. 59 mph on Bonneville Salt Flats in 1936.) The original 24 litre Napier Lion engine produced 564 hp and weighed a ton, but Terry’s car is fitted with a highly modified 6.7 litre Cummins twin turbo- supercharged diesel engine which weighs far less than its original counterpart and churns out a hefty 680 hp with a whopping 1000 ft lbs of torque at 2000 rpm. 2000 rpm in top gear is 100mph! it tops out at 3,600 rpm – I’ll let you do the maths!

The day wouldn’t have been the same without our hugely successful ‘almost family’ Haywood Sisters, who put up a very professional performance medley of songs from the ‘30’s, to which everyone danced on the specially laid dance floor in front of the car display. ‘Gloucester Strings’ picked up the mood and the ‘Lindy Hop’ dancers drew a substantial crowd, with a brilliantly choreographed set of dance routines, which carried on throughout the day.  Rotary was also generously donated a book charting the progression of ‘Bloodhound’ and is signed by Richard Noble, the machine’s project director and Andy Green, the driver, who hopes not only to exceed the existing supersonic record, but the 1000mph barrier. We will be running an on-line auction for this unique book, so keep your eyes on the CVF Facebook pages.

And lastly, a big thankyou to Rebecca Leppard and her husband Nigel for their terrific help and support in putting this show together and to all my incredibly hard working Rotarians, especially Dick De Leeuw and Alan Verrinder, volunteer helpers and amazing kitchen ladies, led by the redoubtable Clare Jennings  without whose unstinting support we couldn’t have put this show on. One final accolade must go to young Owen Ricketts, our youngest (12 years old), car parking assistant, who was a shining star, with unceasing energy and a fine example to every one of his age group. Thankyou everyone for making our day.