This is the second of our "Greatest Meals" 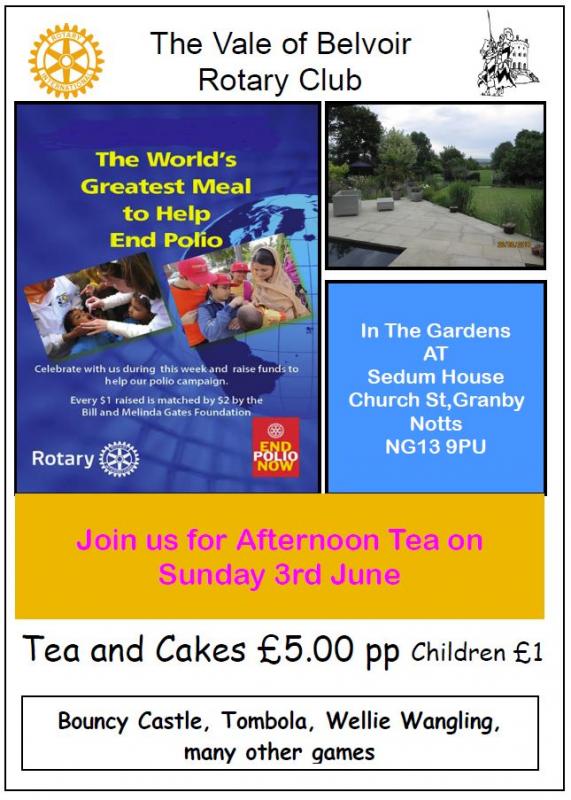 On Sunday 3rd June an Afternoon Tea and Games event was held in the Gardens at Sedum House, Granby in support of Rotary’s End Polio Now Campaign.

Around 100 people enjoyed a warm and sunny afternoon playing garden games including Wellie Wanging and Skittles with a Bouncy Castle for children.

Tea and Homemade Cakes were enjoyed by all and the event raised nearly £600.

The Afternoon Tea was held under the World’s Greatest Meal to Help End Polio initiative which has raised nearly $3M from 4700 events in 78 countries. Matched 2 for 1 by the Bill and Melinda Gates Fundation WGM has contributed nearly $9M to the fight against Polio.

more This year Adrian takes over as chair of our International committee.

more Summary of our international work during the pandemic

more This is a summary of what we did internationally in Jane and Maggie's year.

Some examples of what we do

Our contacts with other clubs

more One of the great things about being a member of Rotary is that it can put you in touch with other Rotarians across the world. Immediately you have a common bond and are welcomed as friends.

back Our International Committee is involved with Polio Plus - a Rotary initiative to eradicate Polio, World-wide; Sand dams; Aqua Boxes; Shelter Boxes; Collecting used spectacles, and many other projects