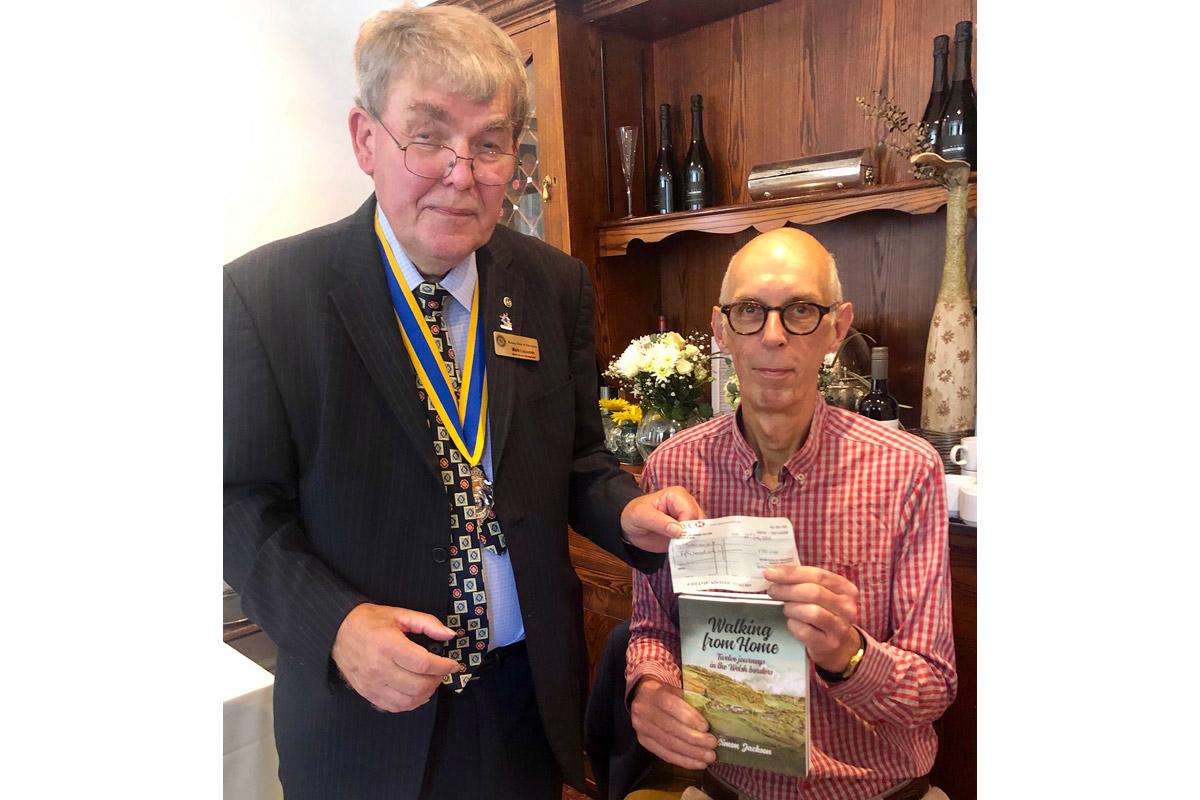 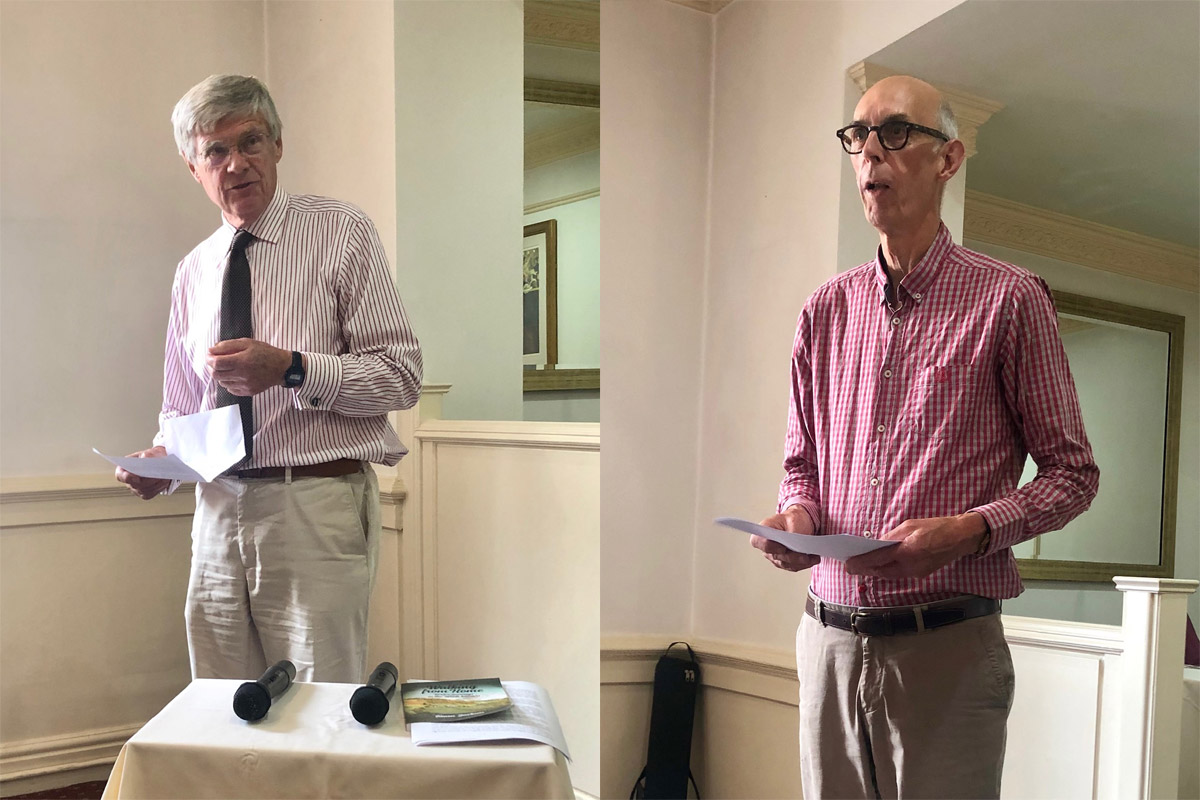 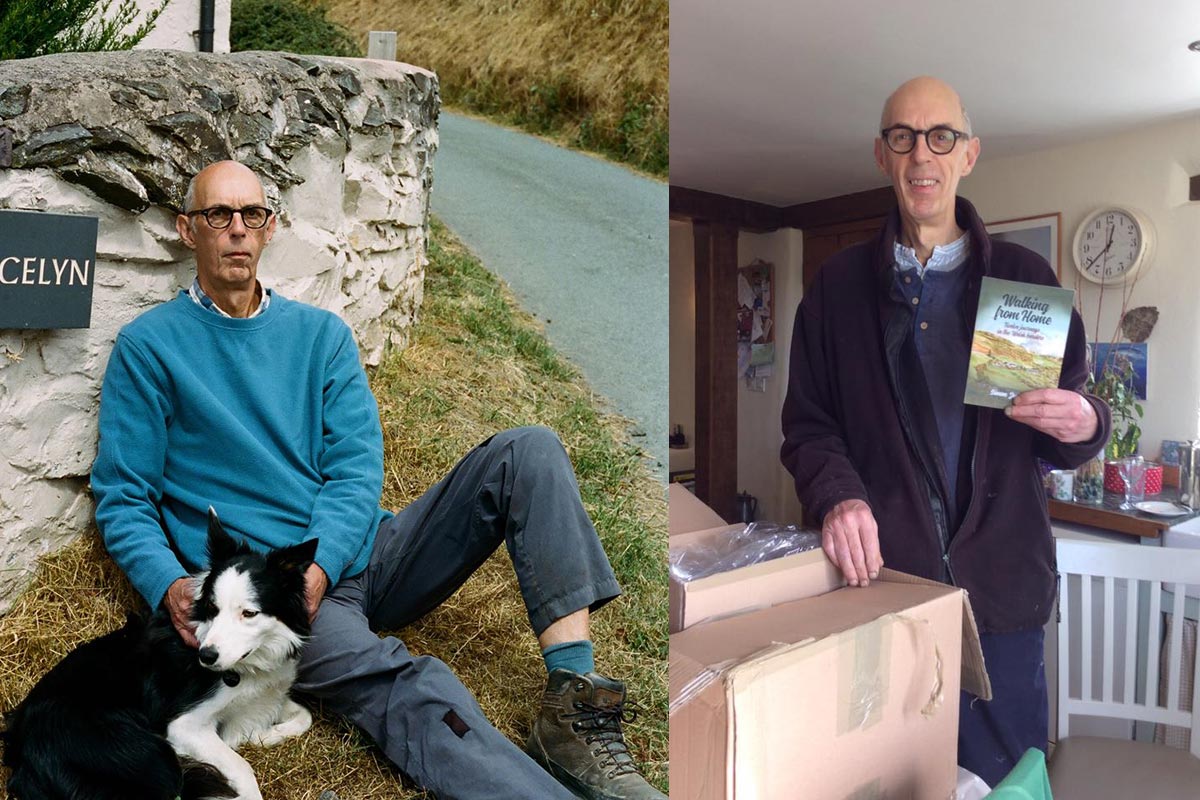 Simon Jackson and his new book.

When retired solicitor Simon Jackson received a diagnosis of Parkinson’s disease he didn’t react as many people would. Instead he decided to increase his activity and in the 5 years since then he has become a very keen walker; locally taking part in Oswestry’s Park runs, walking in the Welsh hills, along Offa’s Dyke, up the Munros in Scotland and further afield in the Alps!

Having moved to a house in a rural location near Llansilin Simon began to really enjoy the walks all around his house, both circular and linear. He has even walked to Welshpool! He says: “I was attracted by the simplicity of walking from home - it’s good for you, it’s free and anyone can do it."

The idea came to him to write a book based on his walks to raise money for Parkinson’s UK and he recently visited Oswestry Rotary Club to tell the members about it. Simon's book is called 'Walking from Home - Twelve journeys in the Welsh borders' with £5 from the sale of each book going to the charity.

On his walks, with his faithful border collie at his heels, at different times of the year, he sees primroses, early birds and ancient houses; every walk is unique and there is always something new to see. Simon quoted a poem called “The Bright Field” by R S Thomas which sums up how he feels on his walks: “I have seen the sun break through to illuminate a small field for a while, and gone my way and forgotten it”. He explained: “The past and future falls away and what is left is the moment”.

Simon’s friends, former colleagues and even his wife helped with the
book, proofreading, fact-checking and illustrating. The walks are each accompanied by photos, sketches and illustrations, the latter by wife Sue and family friend Sally Lewis, whose husband Ray is an Honorary member of Oswestry Rotary Club.

After the talk President Mark Liquorish thanked Simon and gave him a cheque for £50 which will go to Parkinson’s UK.

To find out more, or buy a book, go to www.walkingfromhome.wales.

WALKING FROM HOME Twelve journeys in the Welsh Borders

Design and typesetting by John Neilson

Walking from Home recounts twelve walks in twelve months starting from home in the Welsh Borders near Oswestry. Eight of the walks are circular, two to each quadrant of the compass, all following much-walked routes over the fifteen years of living in the area.

The others are linear walks venturing out of the familiar landscapes. Llangollen and the dramatic Dee valley to the north. Welshpool and the Severn Valley to the south. Wem and the Shropshire Plain to the east and Pistyll Rhaeadr waterfall and the Berwyn Mountains to the west.

The book explores the well-loved landscape around home, its geology, the pattern of its fields and woods and the buildings that inhabit it. The walks encounter history, the old drove roads, Offa's Dyke, and the site of Owain Glyndwr's castle and lands at Sycharth, and geography, the valley of the Cynllaith and its tributaries, the many hills that surround us, Gyrn Moelfre the biggest of them standing at 1,750 feet.

The twelve monthly walks allow the annual progress of nature, the flowers and trees, the birds and animals to be observed and favourite local species, bluebells, ash trees and redstarts to be evoked.

Always there are views near and far and the endless variation of light and colour in the landscape to be treasured as they frame and underly the month's walk.

The walks were taken in the periodic companionship of poets John Clare, R S Thomas and T S Eliot, artists whose work the walks called to mind - Cezanne, Turner and James Dickson Innes and writers George Borrow, whose "Wild Wales" includes walks he did in the locality, and Francis Kilvert.

The landscape where my heart is was the inspiration for recording these walks, my diagnosis with Parkinson's Disease the trigger for starting the project. Oh yes, and the dog needed a walk!

At last the book is here and there will be a book launch on 15th March at Rhydycroesau village hall between 6 and 8pm - an informal event where you can buy a signed copy, meet Simon, have a glass of wine and hear a few snippets from the book.