An inspiring conference reminding all how much Rotary achieves, through the conscientious effort and work of club members from across Britain and Ireland. Then add in eradicating Polio and you see the power for good that Rotary represents worldwide. 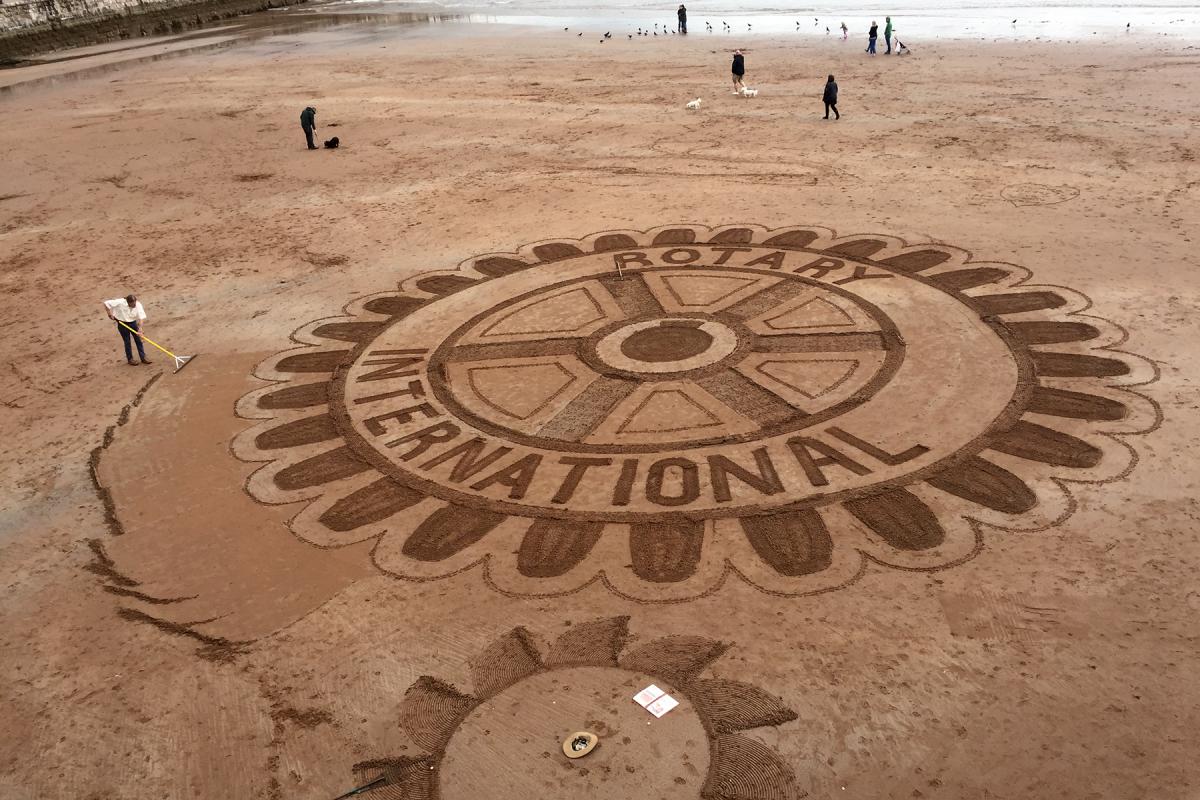 Rotary on the Beach 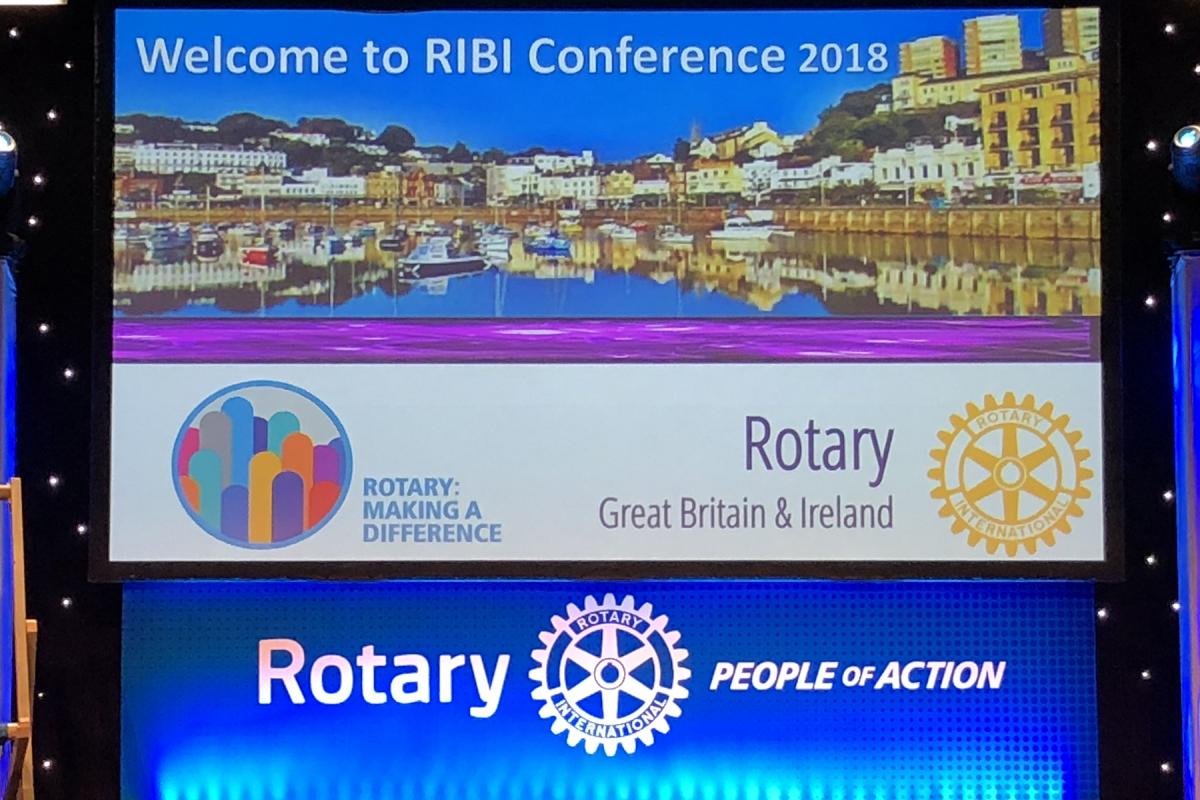 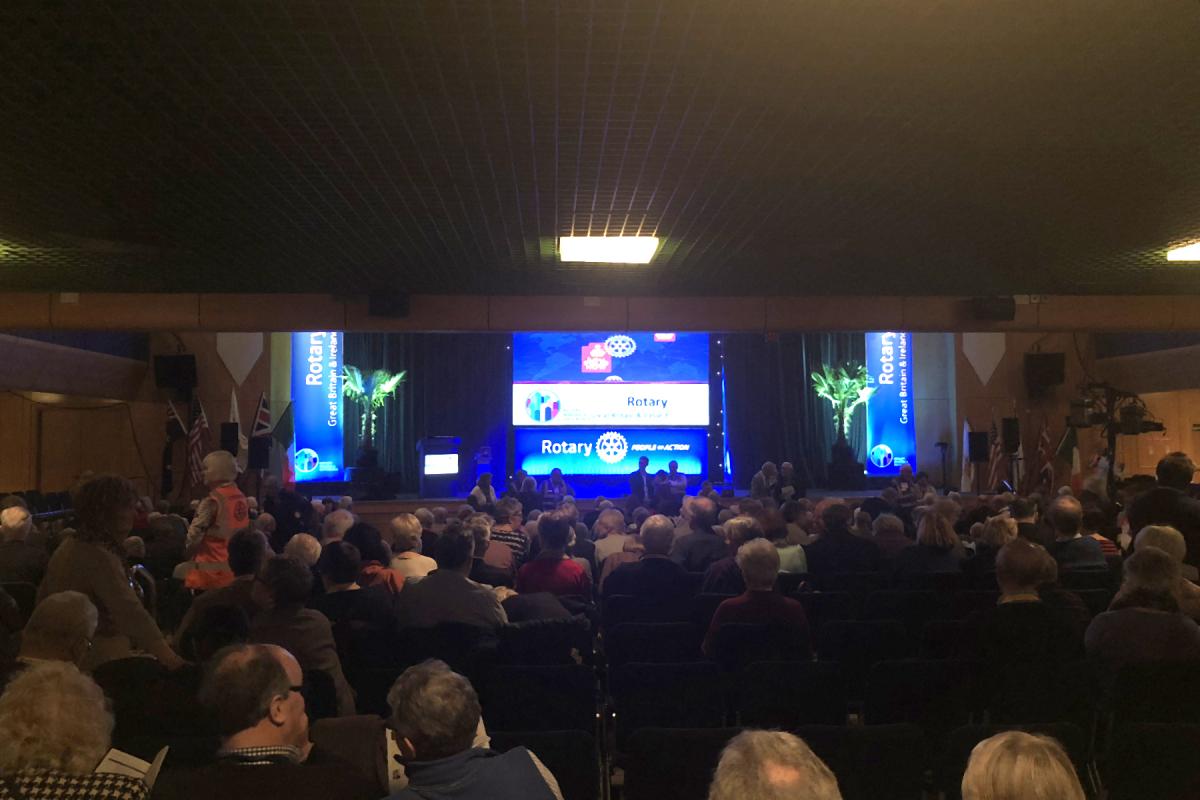 Intent on the Programme 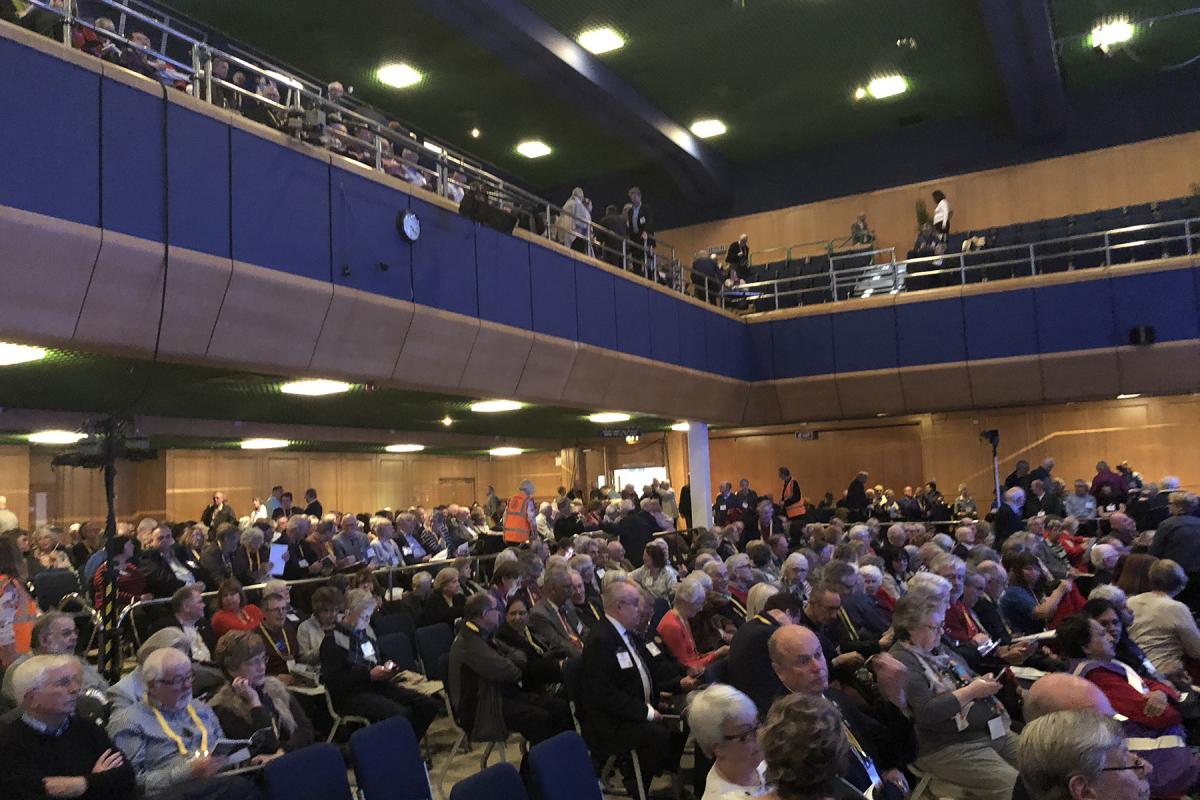 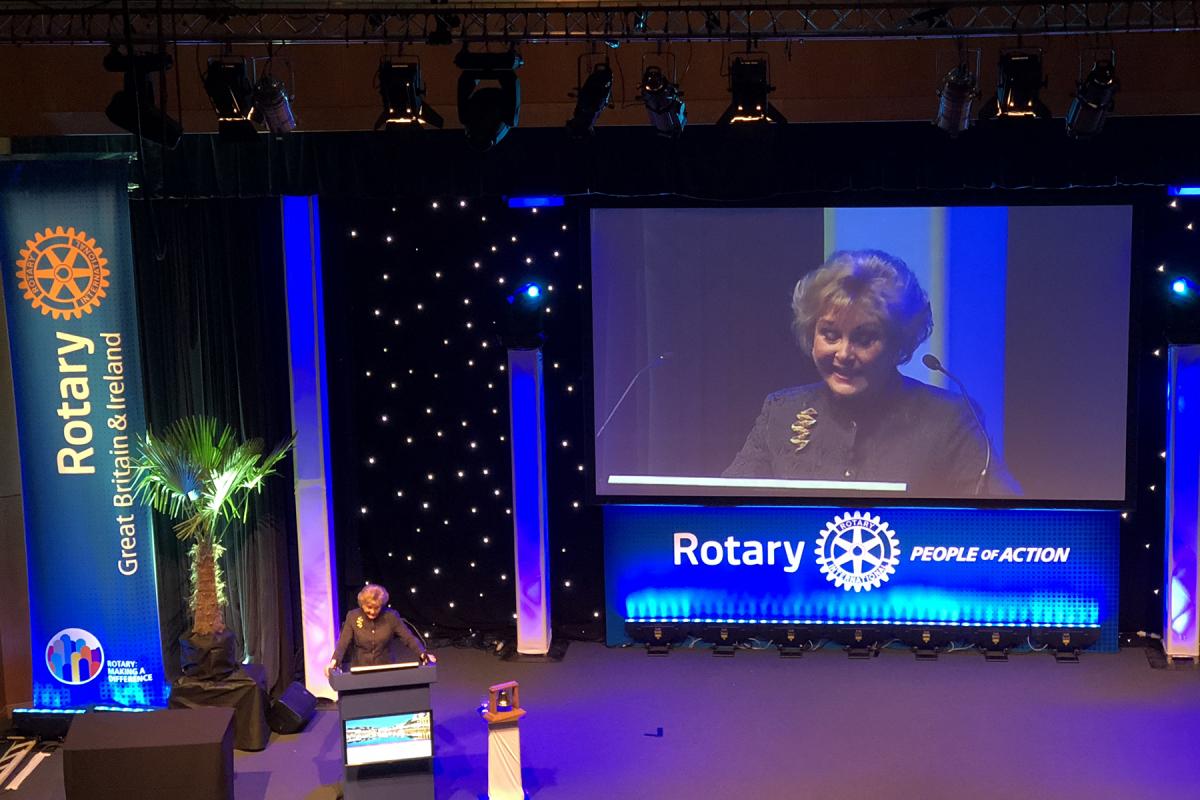 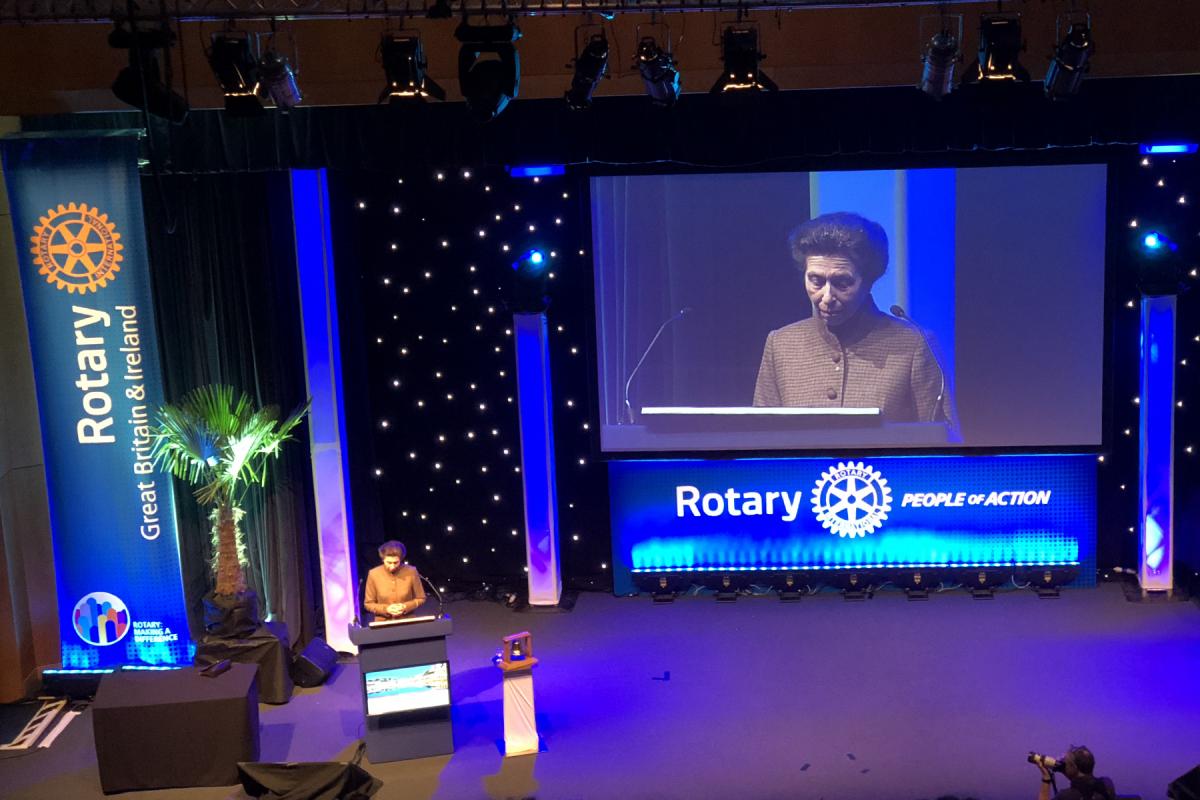 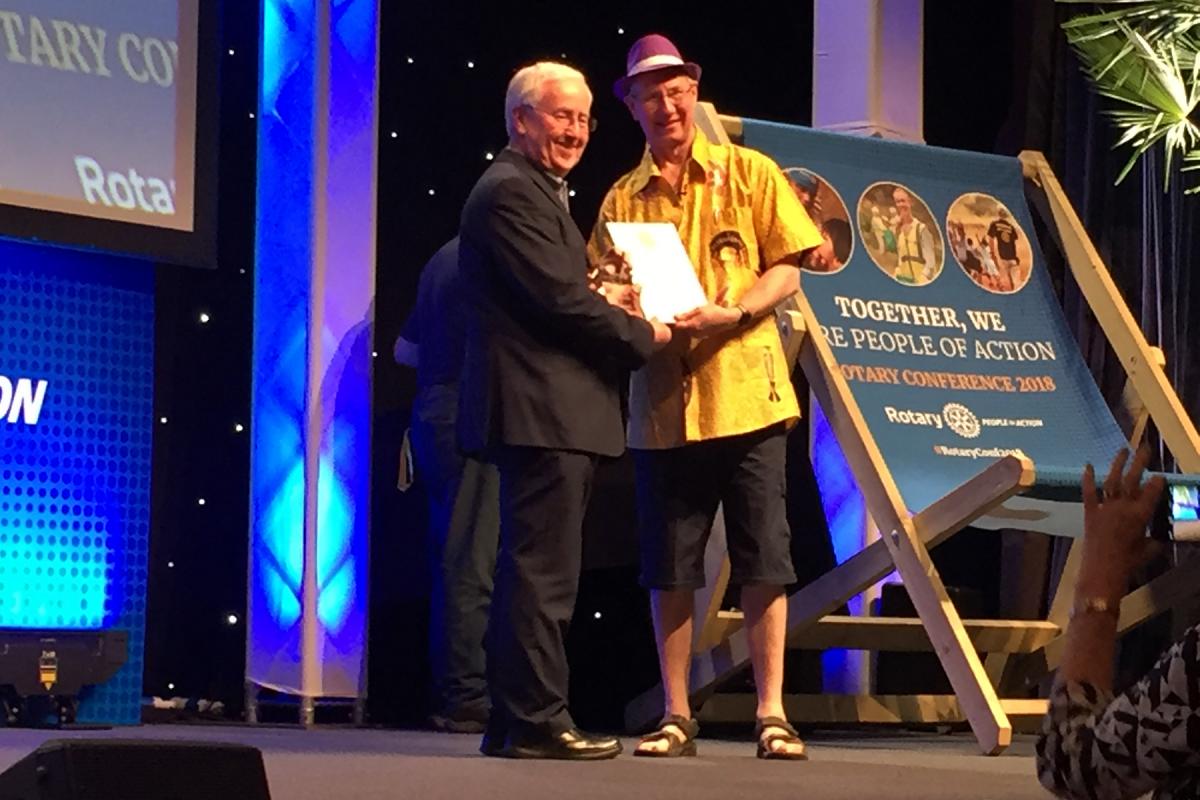 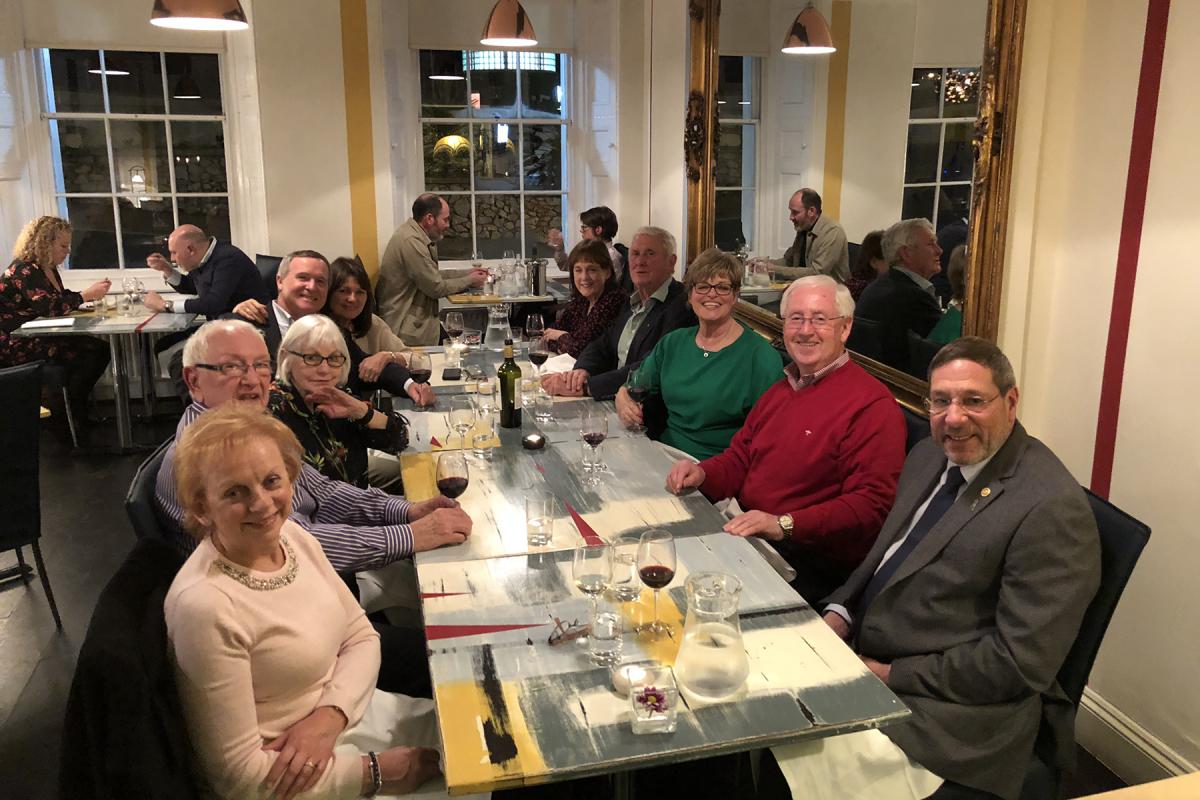 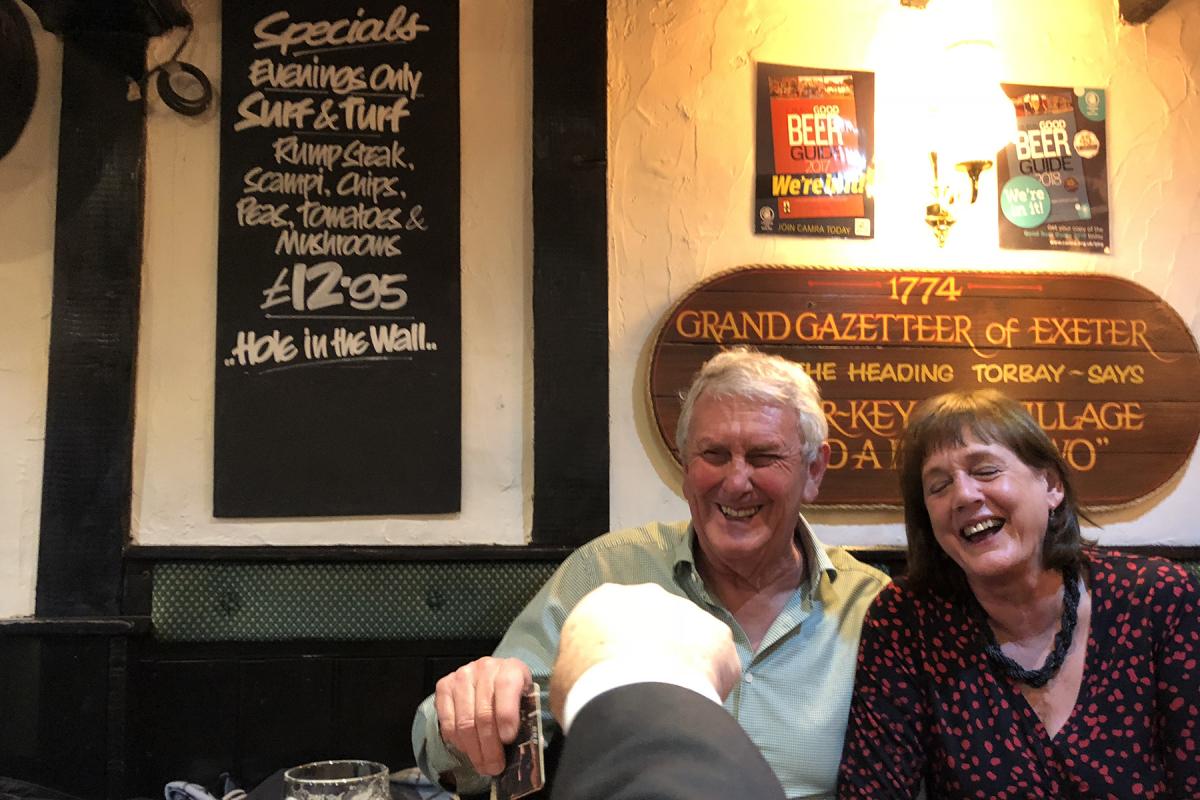 At the Hole in the Wall 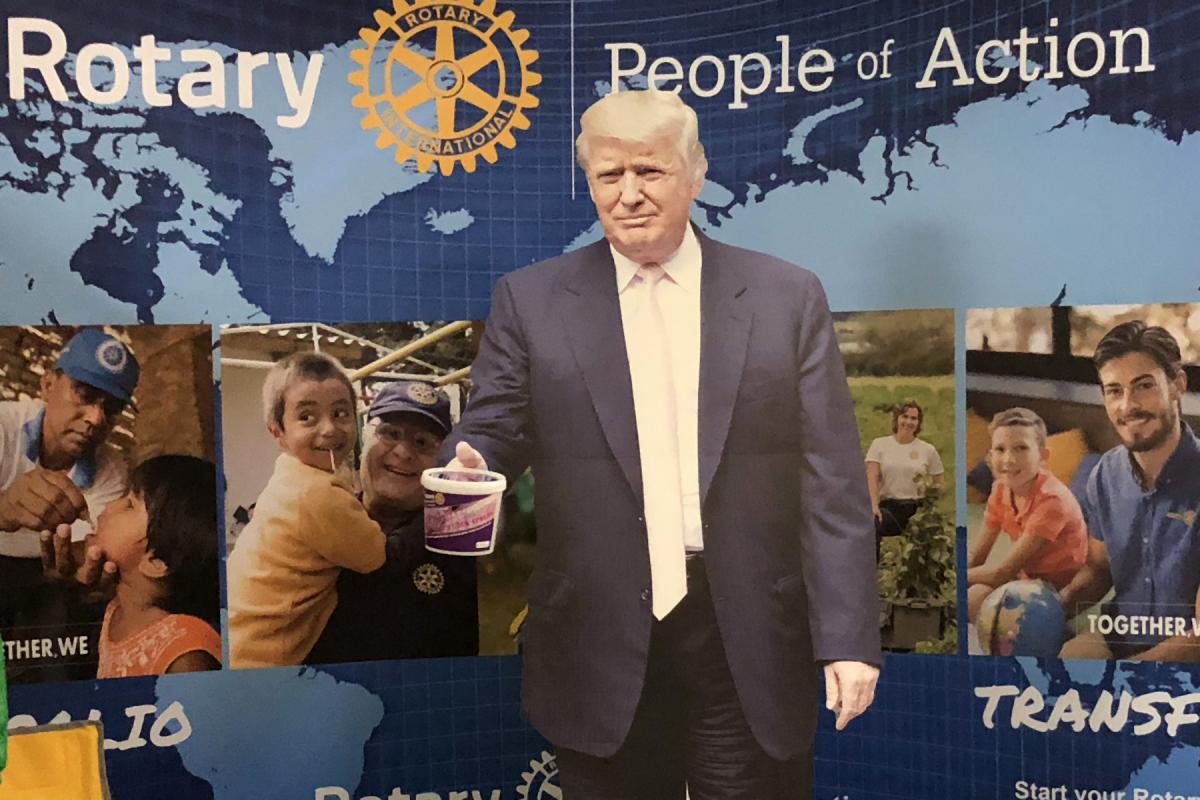 Look who made it here! 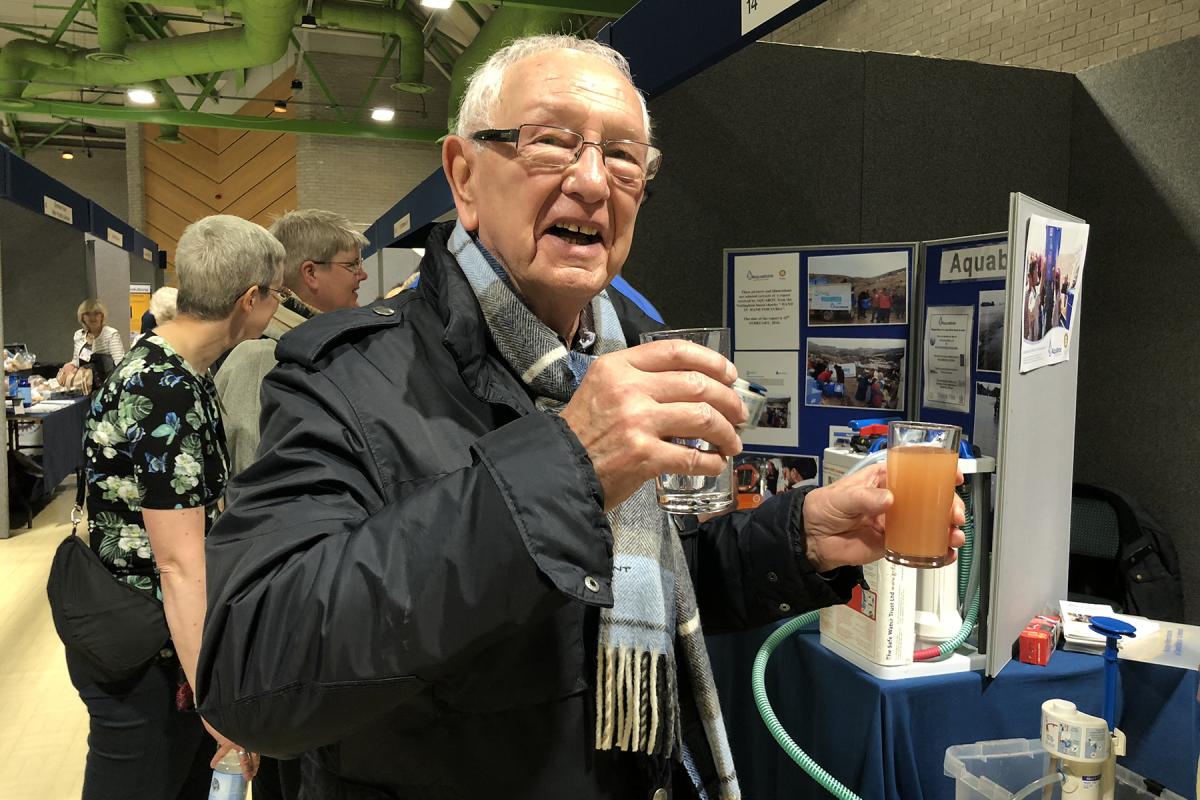 Aquabox - Before and After 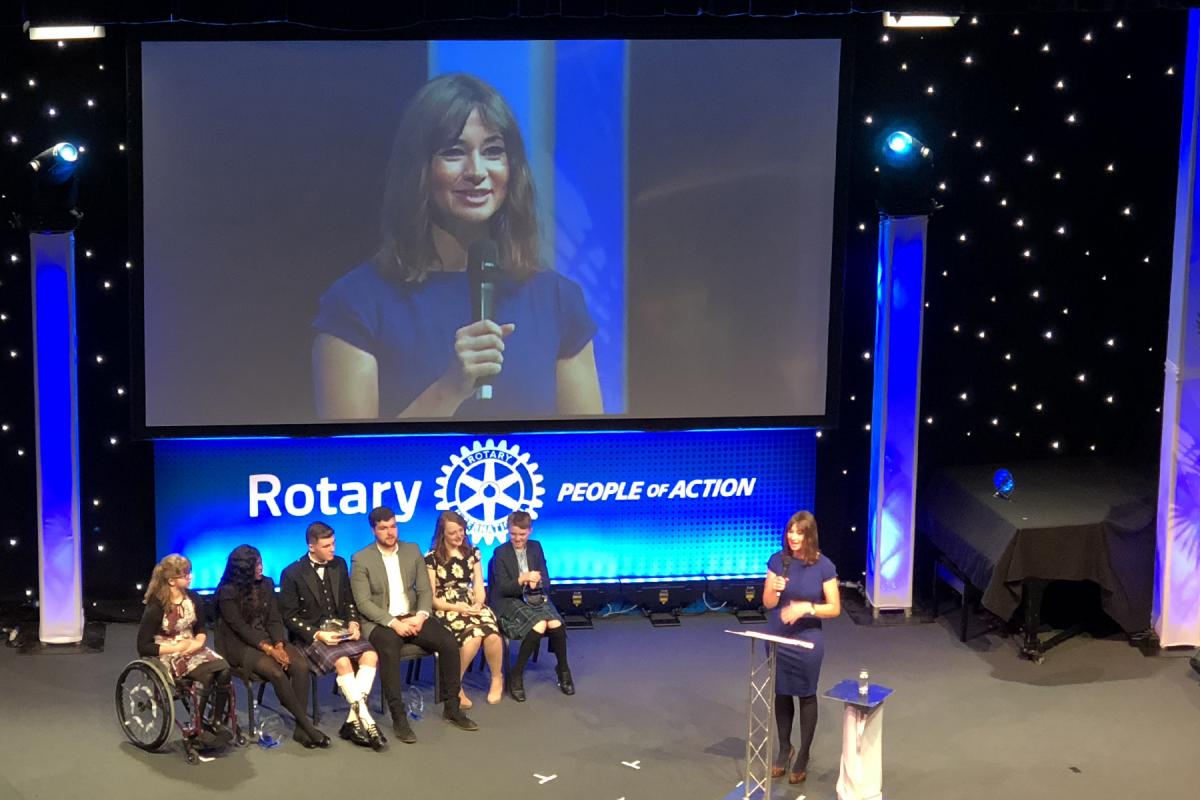 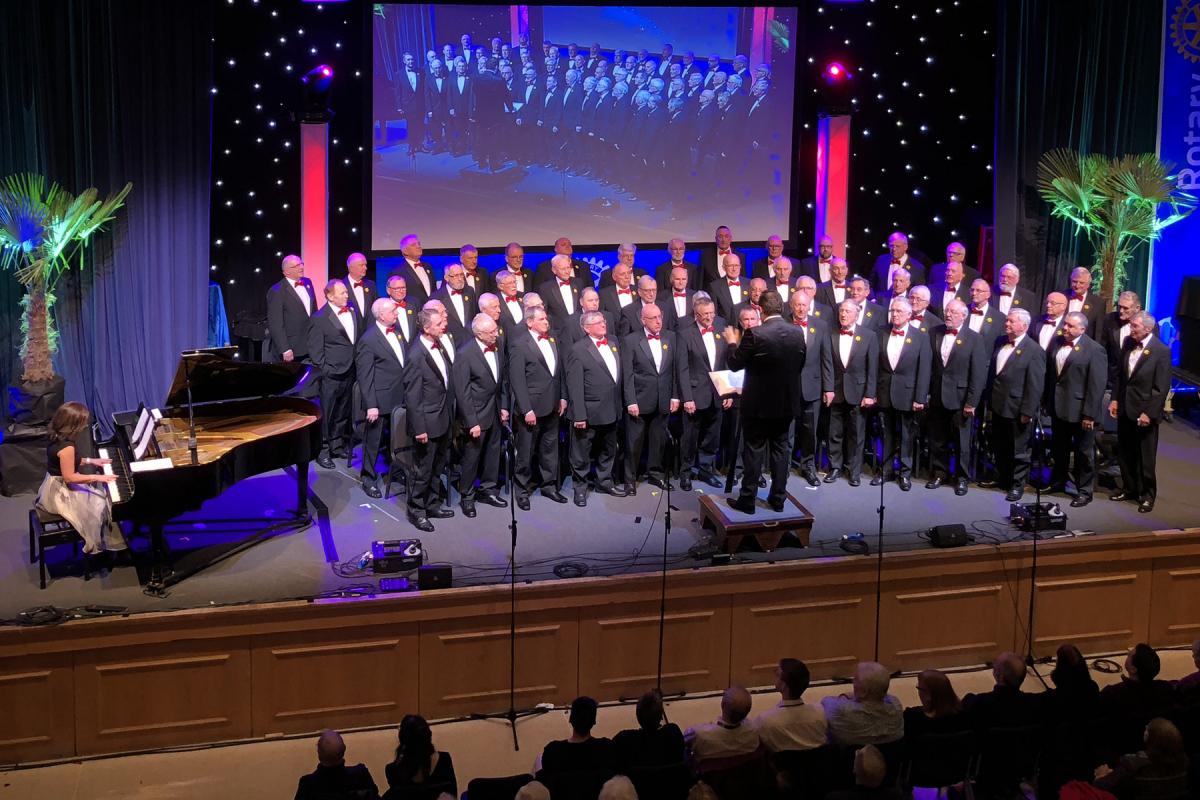 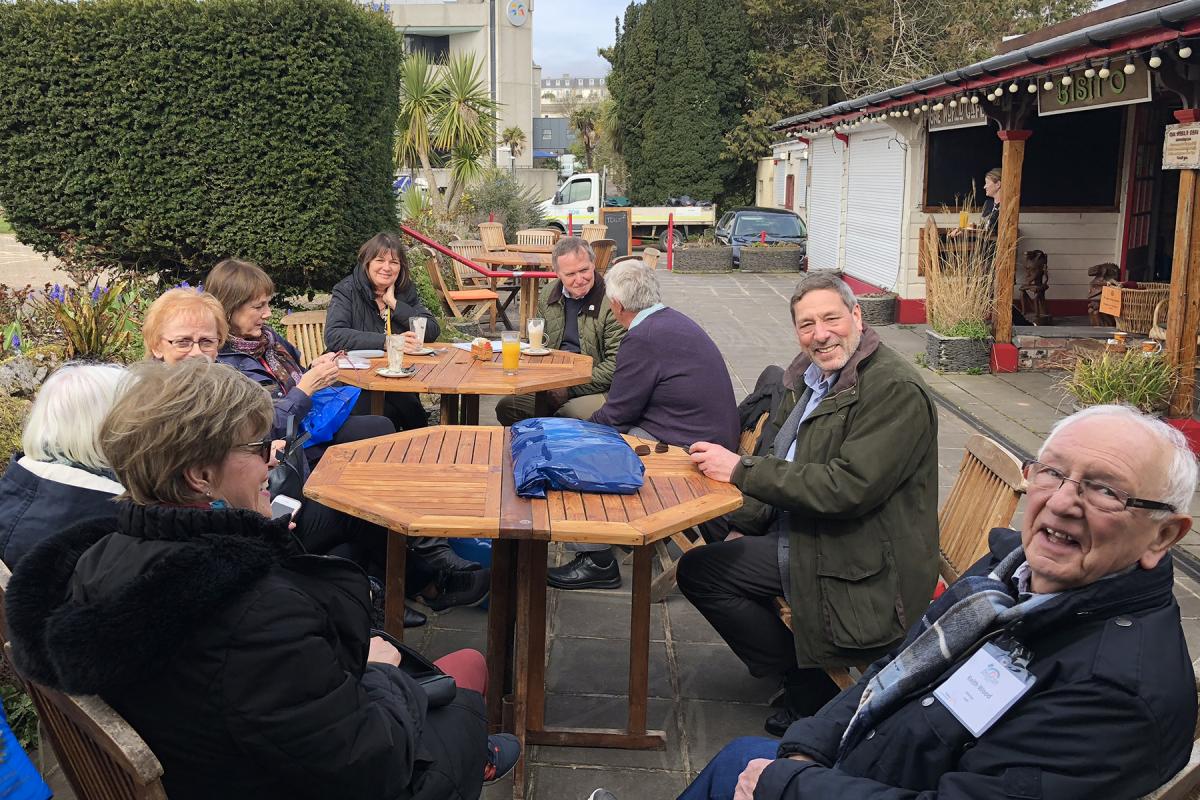 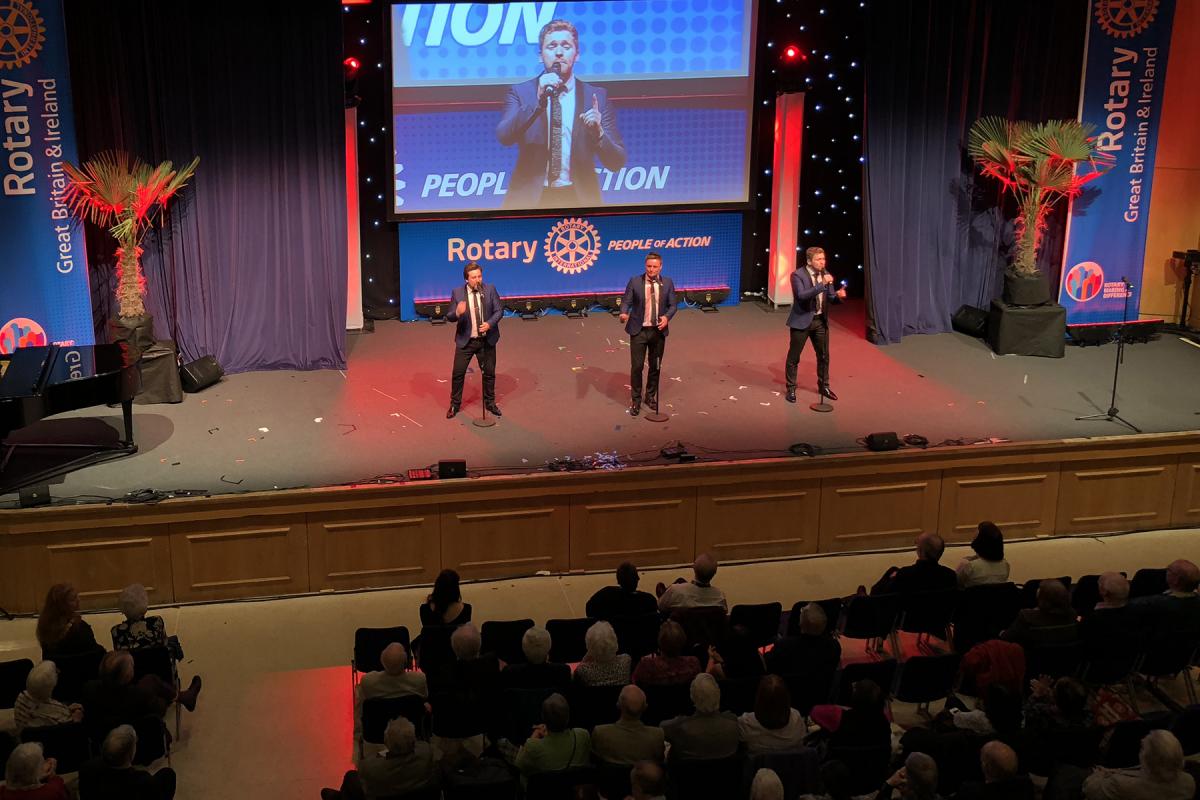 A Royal Presence, Award Winners Again, And Make Mine A Hophouse 13!

Hardly the weather to live up to its nickname, “English Riviera” but that did nothing to dampen the enjoyment of five trusty members and spouses at this year’s Rotary National Conference in Torquay.

The Greenes, Rothons, Woods, Acors and Kettles enjoyed the evening’s chosen restaurants, an excellent Pub called the “Hole in the Wall” dating from 1554 (before and after our meal) and  a couple of us found a delightful new beer called Hophouse 13.  As a result, we enjoyed each other’s company even more than usual!  So much so that one member was asked to leave for making too much noise – by the other four!

The Conference itself was, as always, inspiring. It was good to be reminded just how much Rotary achieves.  And to realise these achievements are made possible by the conscientious effort and work of club members from across Britain and Ireland. Then when you talk about our key objectives such as eradicating Polio - the power for good that Rotary represents worldwide.

The Conference couldn’t cover all the causes but rightly just concentrated on the key aims and objectives for 2018.  Those relating to the organisation of Rotary were presented to us by Rotarians from RI -President Ian Riseley, Rotary GB&I - President Dennis Spiller, Inner Wheel President - Liz Thomas, Tom Silverson - Chair of Rotaract and members from local clubs such as Bishop Stortford.

The charitable causes were presented by a variety of celebrities, no less than royalty.
HRH Princess Anne spoke warmly about her respect for Rotary and the sterling work the organisation was doing and achieving towards eradicating Polio. A major achievement to have someone of Princess Anne’s stature acknowledging the continuous charitable works by Rotary for over a hundred years.

Many celebrities from all walks of life gave up their time to come and add weight to the specific causes they supported.  To name a few:  Phil Bennett  of Rugby Union fame,  Angela Rippon CBE, Chris Tarrant, Liz Johnson Olympian, Alex Ledger from Blue Peter and Pam Rhodes from the BBC. They all spoke with a mix of passion and humour.
One highlight personally were the  Awards to the Young Citizens of the Year session,  again  covered live by the BBC,  a moment  to sit back and be impressed at the drive and effort shown by young people in setting up initiatives to help various needs within their local communities.  Young people seldom get a good press yet this 10 -year- old Rotary initiative showed what contribution many of them do make.

Huw Boucher who had won the Rotary Young Musician of the Year award treated us to a showcase of his talent. He can play various instruments but chose the harp. I never quite realised how versatile the harp can be in a most impressive performance
There were other talks covered at the Conference and in the break out “Workshop Shop” sessions but to mention one.  Detective Sergeants Gary Brown and Ian Kellaway from the Police Fraud Squad and Cyber Prevention Team respectively gave talks and advice on the growth of crime in these areas and actions we can all take to lessen the chances of becoming victims. Informative but worrying. An area we all need to take more seriously and identify how best to take preventative action.

Have kept this next item to the end of the business coverage of the Conference so we finish on a real high.

Another special moment for our club as Peter Greene and Trevor Bond won for the second year running the National Rotary GB&I Award for the for the best Club Bulletin.  What an achievement when you consider how many clubs there are in Rotary GB&I. Deserved recognition for all the hard work and conscientious effort that the two have put in to making such a professional communication document. Well done to them both.

After the business, back to the pleasures.  On the Friday night we went to the Music Concert at the Conference Centre and were entertained by the Welsh Bridgend Male Voice Choir, an illusionist act called Matrix and finally three young men who did a medley of hits, appropriately from the 60s and 70s and supported by some sharp choreography.  A good evening.

We missed the Saturday evening beach party dinner and dance, as Sarah doesn’t like me standing on her toes!  Instead we went for a final team meal in another excellent restaurant, aptly named the Elephant and then back to our own watering hole, The Hole in the Wall, to have a nightcap or two.

As usual the conference was enjoyable, inspiring, different and shared with good company.   A few format changes are planned for next year.  More of that later.