Sally Bundock spoke to us on her experiences of working as a presenter at the BBC. . 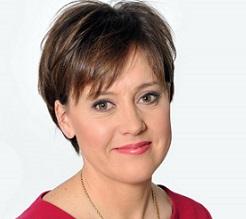 Sally Bundock is a news presenter, who presents The Briefing on BBC One, BBC World News and BBC News Channel. She presents the World Business Report early morning edition, viewed mostly by audiences in European and international markets.

On Thursday November 29, 2018, we were asked if we could re-schedule our meeting agenda in order that our speaker, Sally Bundock, could leave club early.  So straight after our meal all Rotary business was postponed and Rainer Struck introduced Sally.  Boy, was that re-scheduling worthwhile!  We were treated to one of the most professional presentations the club has ever witnessed!  Mind you, it is not surprising that an accomplished TV presenter on BBC is used to standing up and talking very competently, this time not in front of a camera but an entranced group of Rotarians.  Sally presents or has presented Business Briefing, World Business Report and Talking business on BBC as well as having worked for Bloomberg Money.  She has attended and reported on G7 conferences and rubbed shoulders with and interviewed heads of state and CEOs of large corporations at the World Economic Forum in Davos.  She knows her stuff!

She starts her day at 01.30 (yes in the middle of the night) and has a driver to take her to BBC London, where she is briefed by her team of overnight researchers and puts together her programme for broadcasting at 5 am on BBC World Service and the BBC News Channel. She does her own research on any guests she is interviewing. She gave good advice on how useful a 40 minute catnap can be after a meal.  It rejuvenates the brain cells.  She only needs four hours sleep a night, rather like Margaret Thatcher she pointed out.  Sally, from Holtspur, Beaconsfield,  is recently widowed and has three sons.  At least one of them has played in the Dropmore football tournament organised by our club and he absolutely loves it!  Those members who could not make it to club missed an outstanding presentation.