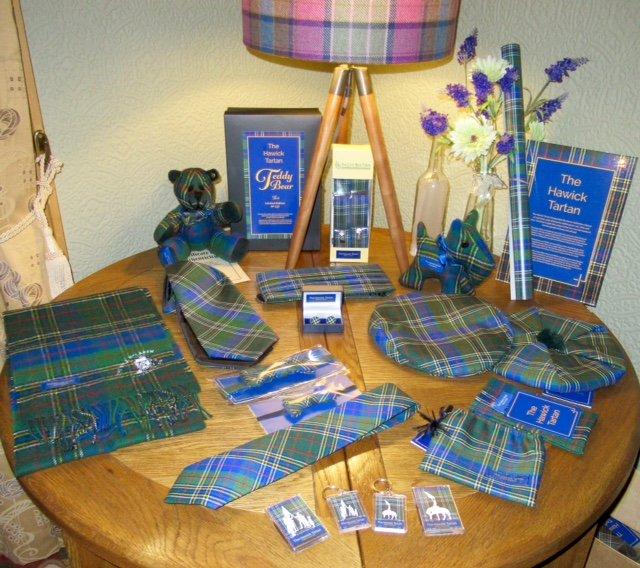 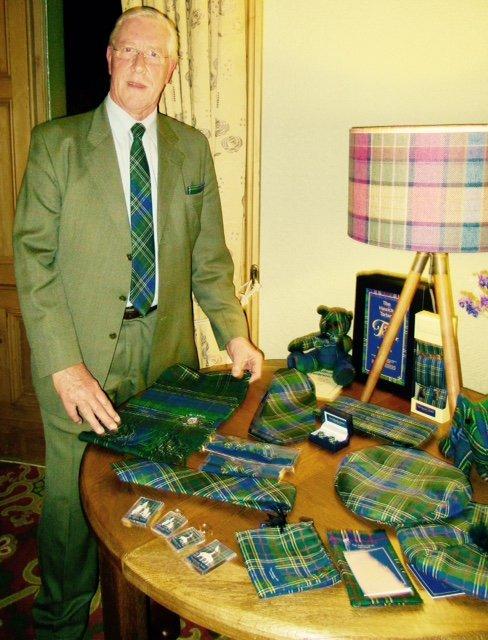 Robin enthralled his attentive audience with the story of the "Birth and life of The Hawick Tartan"which has been very much a personal exercise.

After an early career in the knitwear industry, at home and overseas, he returned again to his home town and in 1988/9 started The Hawick Sock Company, which is still operating today. This led to his involvement with the Hawick Chamber of Trade, whose President at that time was a Rotarian, PP Adie Armstrong. Robin recalled that it was during that time in the 90's, that a chance remark by Adie, was that the town's rich heritage of colours, could make an interesting fabric. Something which Robin kept in his mind for a little longer.

During the early 90's he was approached by another friend, the late Ken Hood, recently retired to his native town, with considerable experience of computing and a computer, also anxious to make a contribution to the town.

In the intervening period, Robin had started to think of putting Adie's comments, towards, perhaps, a tartan fabric, utilising the computing skills of his friend Ken, to a see what could be done.

Thirty combinations were produced. The next step involved the pair taking their colour combinations to another Teri friend, Andrew Elliot, who had a weaving company, Elliot Fine Fabrics, in Selkirk, for his technical advice. For him, one combination stood out and he uttered the now famous words, "The Hawick Tartan", which had never been mentioned before.

One technical problem involved the fact that the design had 7 colours and a standard loom can only weave 6. However, the loom tuner, Rob Beaton, overcame the difficulty and within only three days, they were invited back to Selkirk to witness the first Hawick Tartan Rug being woven.

With Robin, Ken and Andrew being the partners in the Hawick Tartan Co., it was duly registered with the official bodies and in February 1969, Provost Myra Turnbull, at an official reception, accepted the tartan on behalf of the town.

Unfortunately, due the death of two of the partners, there was a lull in its promotion and development.

However, 2007 saw it's rebirth when Robin joined forces with James Sugden and set about marketing it again .They also formed an association with the Bill McLaren Foundation in a further promotion since Bill had been a great ambassador.

The Hawick Tartan is now to be seen in a wide variety of products, from kilts to cuff links and wrapping papers and is being exported widely, wherever Teries are to be found.