The brief ceremony attended  by members of the club was followed by an evening meal courtesy of the Plough Inn, Rhosmaen and was well attended by Rotarians and their wives and guests and Ladies of Inner Wheel.
Guests included the Mayor of Llandeilo Fawr Owen James and his wife Jordon, Sonia Beynon President of Inner Wheel,Councillor Edward Thomas and guest speaker Dr Rhys Thomas.
Later that evening a raffle raised £175 for charity. President Gordon then thanked Immediate Past President Colin Jenkins and reminded Colin that although he had been Mayor of Llandeilo Fawr on three occasions he had only been President of the club once so far!
Gordon then outlined his objectives over the coming year and these included the club becoming more involved with local community issues particularly with the parks that the Town Council have been given control of by the County. The issue of club membership with the President targeting one new member every month throughout his year in office.In addition the President wished to have closer links with neighbouring clubs and his Club Calendar was to feature a speaker once a month.
The President got off to an excellent start when he introduced the evening's guest speaker Dr Rhys Thomas who had just become the first new Rotary member.
Rhys introduced his talk entitled "A Life Less Ordinary".This was about his involvement in Sierra Leon in East Africa when the British Army sent in a force to confront the "West Side Boys"who had taken Western hostages.
Rhys expanded his talk to include his 17 years in the army covering many conflicts around the world and his involvement with the Wales Air Ambulance which was founded on the St: David's Day 2001 and which is today considered to be the finest ambulance service in the world.
Senior Vice President Christopher Parish gave the vote of thanks.
PHOTO-Left to right David Tiddy 41 Club, Councillor Edward Thomas, Dr Rhys Thomas, Howard Beynon (Rotary), David Owen (Rotary), Mayor Owen James, Nigel Haines (Rotary), Immediate Past President Colin Jenkins, Ken Griffiths (Rotary), Senior Vice President Christopher Parish, President Gordon Kilby, Michael Taylor (Rotary), Richard Hughes (Rotary) and Kevin Sivyer (Rotary). Llandeilo Rotary Club held its Club Assembly on the 13th June , Assistant District Governor Ian Hughes was introduced by President Colin Jenkins who passed over the baton to Senior Vice Gordon Kilby . He presented an outline of his plans for the coming year with the main focus being on membership . Chairman of the various committees presented their planned programmes for the year to Assistant District Governor Ian. Ian then gave a review of the programmes recognizing that the club were undertaking a detailed programme in the coming year and he wished us success in the coming year The photo shows Junior Vice Chris Parish , President Colin Jenkins , Ian Hughes Assistant District Governor and Gordon Kilby Senior Vice President 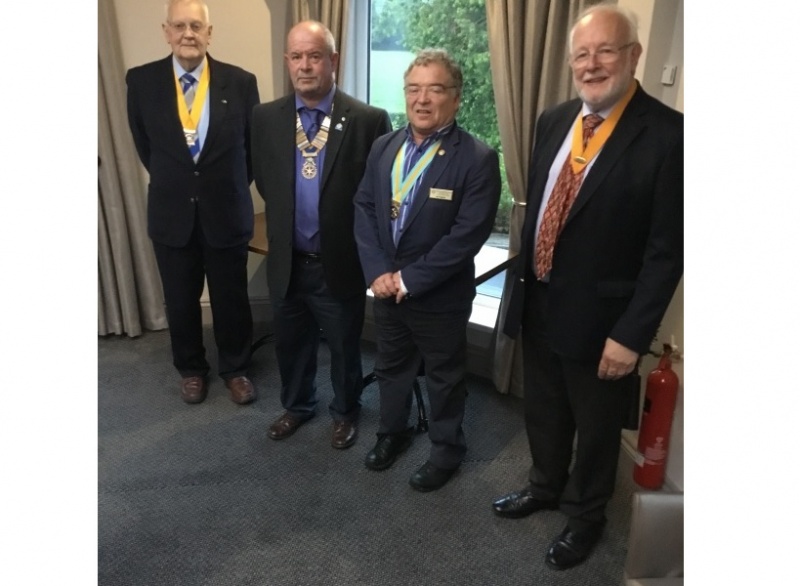 Llandeilo Rotary's Annual Ploughmans Lunch took place on Friday the 7th June at Llandeilo Civic Hall  Thanks to everyone who supported this event and to all those who helped to make the event successful particularly Llandeilo Rotarians, the ladies of Inner Wheel and Rotarian wives/partners  It is thanks to everyone's generosity that the club has managed to raise £1400 for Tenovus , Wales Air Ambulance and other local charities Thanks must go to the Plough Inn Rhosmaen , Llandeilo Coop and Brian Thompson for donating raffle prizes 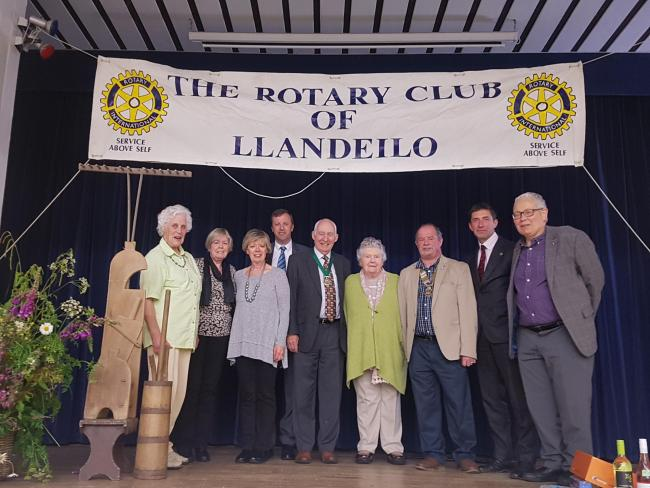 Llandeilo Rotary Club held their stroke awareness day on Saturday the 8th June as part of the 2019 Stroke Awareness Campaign  The picture shows Rotarians Martin Peake and Kevin Sivyer of Llandeilo Rotary club offering free blood pressure checks to the public who passed Nigel Williams pharmacy  An average of one person per five minutes were tested by St John’s ambulance in Nigel Williams pharmacy, with a number being referred to their GP for further tests, proving again the importance of these tests in the prevention of strokes. Thanks must go to Kevin Sivyer for organising the event and all the Rotarians who took part  Appreciation is due to the pharmacy and St John’s for their generous support on the day 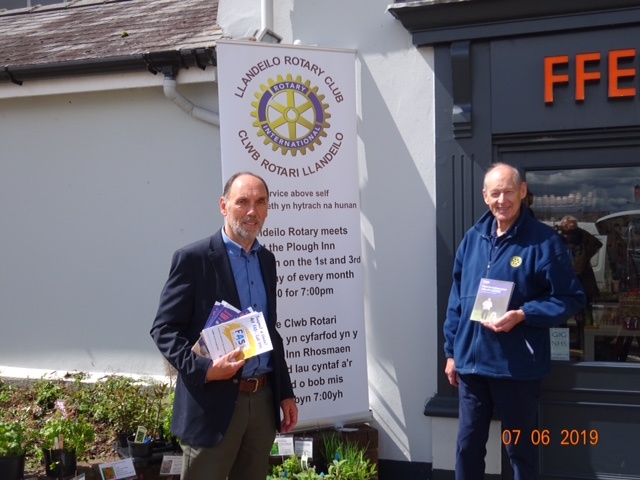 On Thursday 17th January at the Plough Inn, Rhosmaen Llandeilo Rotary Club welcomed Sarah of Tenovus Cancer Care . Saral who is part of the fund raising team for Tenovus was introduced by Past President Kevin Sivyer . Rotarians were then given a brief resume of the Welsh Charity established in 1943 by ten business men , hence its name , that became a dedicated cancer charity in the 1960's

Sarah's talk centred around the mobile units that operate throughout Wales and allow patients to be treated locality they live . Presently there are three mobile units with the most modern having a capacity of 60 % more than the first unit with the ability to treat 8 patients at any one time . Now the charity is raising £1 million towards a fourth unit . So successful are these mobile units that the idea is being considered by various NHS Health Boards .

Following Sarah's talk , Immediate Past President Richard Hughes presented Sarah , on behalf of Tenovus , with a cheque of £1500 . Tenovus was one of Richard's chosen charities during his Presidency  2017/18 On the 15th November the 2 students from Bro Dinefwr attended a Rotary meeting at the Plough Inn Rhosmaen . The 2 students were Gruf Thomas and Rhys Davies and following a wonderful meal they gave us details of their experiences during their week at RYLA . As is usual with RYLA both made a lot of friends and are planning to meet up with them in the near future . They also gained a lot of confidence from having to lead various groups with different tasks as well as the various challenges such as the letter box , canoeing , cave exploration etc . Both Gruf and Rhys thanked the club for funding their RYLA weeks . The club have asked Gruf and Rhys to spread the message to other students at Bro Dinefwr   as regards RYLA . Hopefully the can both be available for promoting RYLA at the school in the early part of next year . The RYLA funding came from the  second round of Coop community fund and the club would like to thank the Coop and the members of the local Coop Community for their support 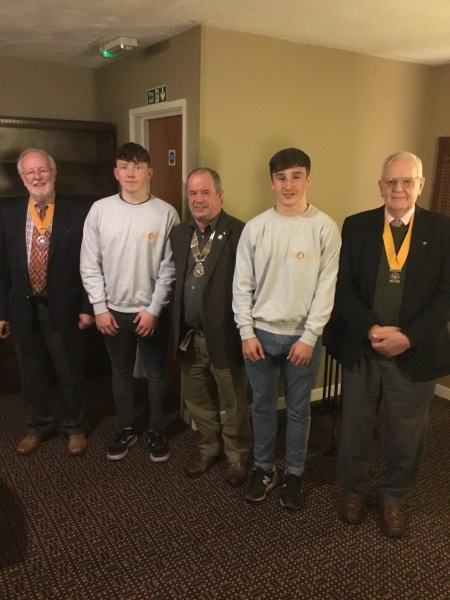 Emma and Nick Leech live at PenyBanc and have a daughter Izzie Leech who suffers from a genetic disorder which means she cannot feed and breathe as well as sit unaided . Emma and Nick are creating a sensory garden for Izzie  so she can appreciate her garden . Llandeilo Rotary have donated £250 and will receive a matching grant of £250 from Rotary to make the donation up to a  total amount of £500 .The picture below so President Colin Jenkins and Assistant District Governor Kevin Sivyer  presenting the cheque to Emma  Leech 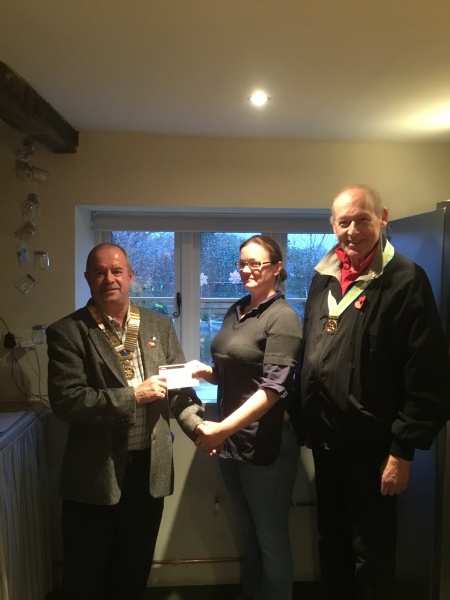 On the 8th November A rotary round quiz match was played aginst Aberystwyth at Lampeter Golf Club . The team comprised of Richard Hughes, Martin Peake and David Owen . Despite our best efforts we lost by 5 points to the Aberystwyth Lecturers ( we think) . Kevin Sivyer ( a Llandeilo club member) and assistant district governor was the question master so we are going to blame him . Thanks must go to both the Aberystwyth Club for organising the event and Kevin Sivyer the question master as an enjoyable evening was had by all

A keenly  contested skittles match was held at the Sexton Arms Llansadwrn . However the previous experience of playing skittles meant that Llandovery won comfortably in all the ends played . Half way through the evening some of the Llandeilo players had to be told the objective  was to knock the skittles down not miss them . However it was na entertaining eveening with good fellowship between the 2 clubs . Thanks must go to the landlord Cliff who provided us with some healthy food sausage chips and beans . I am sure when we got home the  camp fire bean scene from blazing saddles was repeated 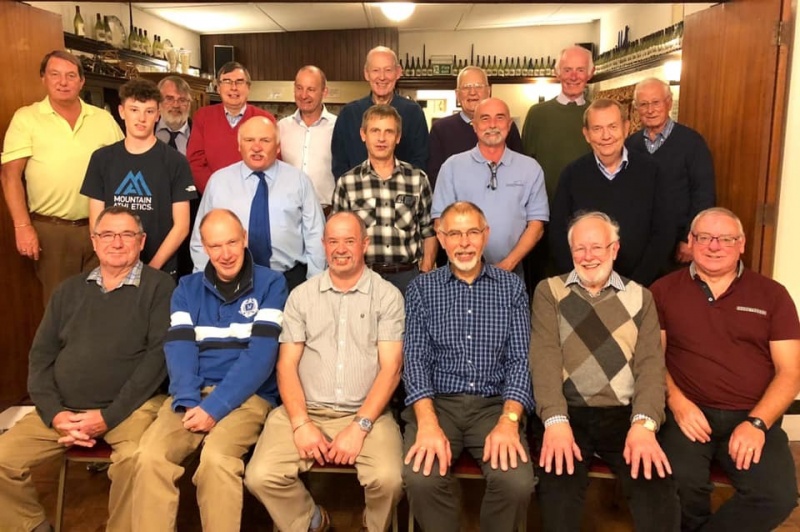 On the 18th October the club had a visit from the District Governor who highlighted the declining membership at both club and within the District and this is something Rotary neeeds to address ,although membership is growing in other parts of the world . The numbers attending RYLA were also less and a continuation of this would result in possibly losing the 3rd week . The club explained that Llandeilo Rotary would be taking up 2 places as a result of funding from the Coop Community Fund .

Clive  also gave details of a District Initiative to look at Environment projects with the view tor reducing all forms  of pollution particularly litter and plastics etc .He also explained that his objective was not to interfere with the local club activities as they new the locality and what was required

Details of the club's fund raising activities were highlighted , particularly the Ploughmans Lunch and the  Coop Community fund which has enabled Rotary to support charities such as the Carmarthenshire Autistic Society Oncology Unit Glan Gwili, and various other charities . President Colin's charity for the year will be Air Ambulance a very worth while charity . District Governor Clive pointed out that Maggie  Hughes had raised enough funds for the Tenovus bus but was continuing  fund raising throughout this year . Throughout last year Llandeilo Rotary Club had raised funds for the tenovus bus via the Ploughmans Lunch  and raffles and this money is to be forwarded to Maggie Hughes . At the end of the meeting District Governor Clive thanked the Club for their hospitality and President Colin thanked District Governor Clive for updating us on District Projects 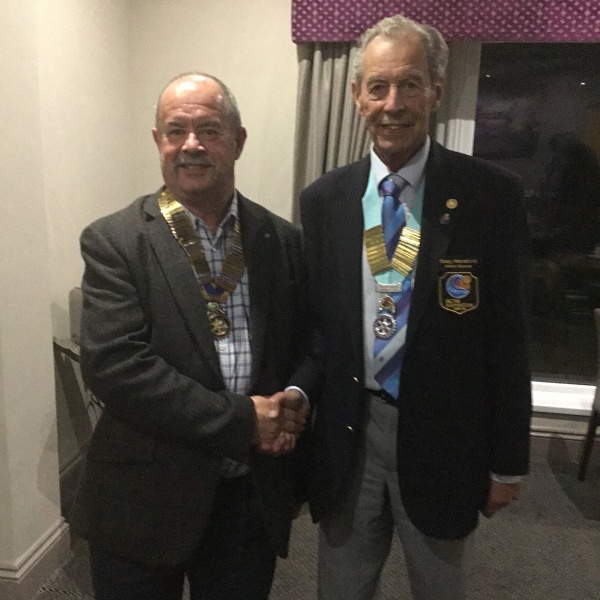