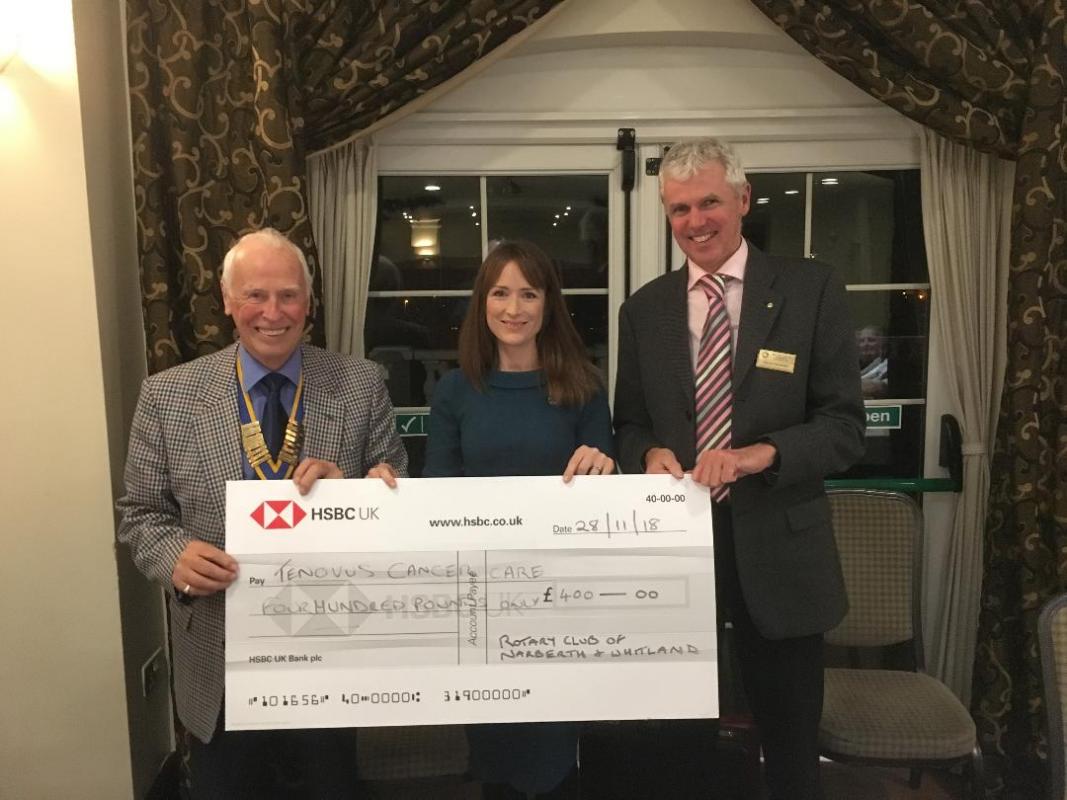 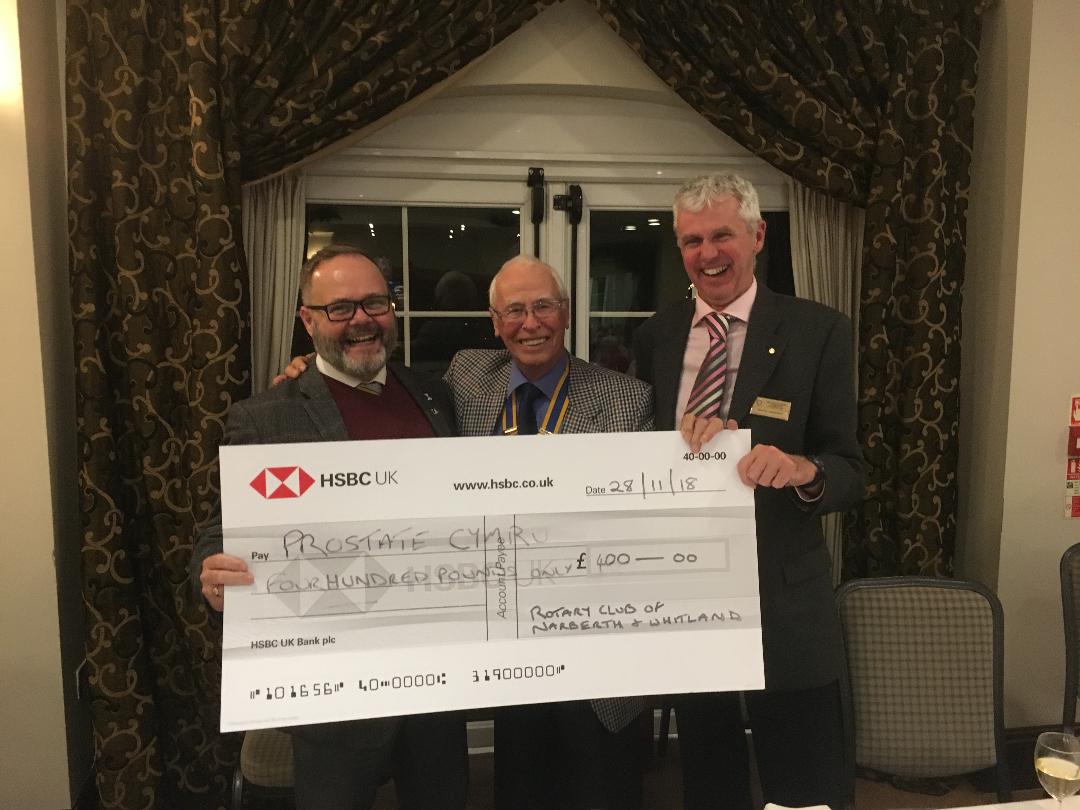 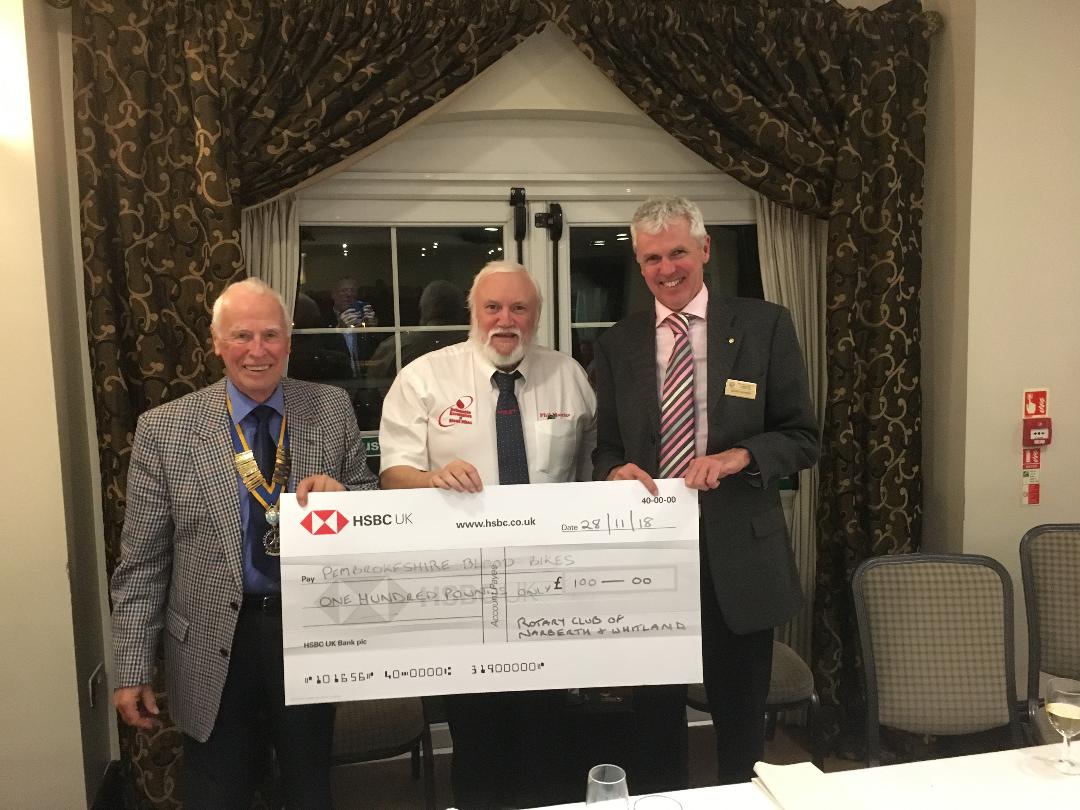 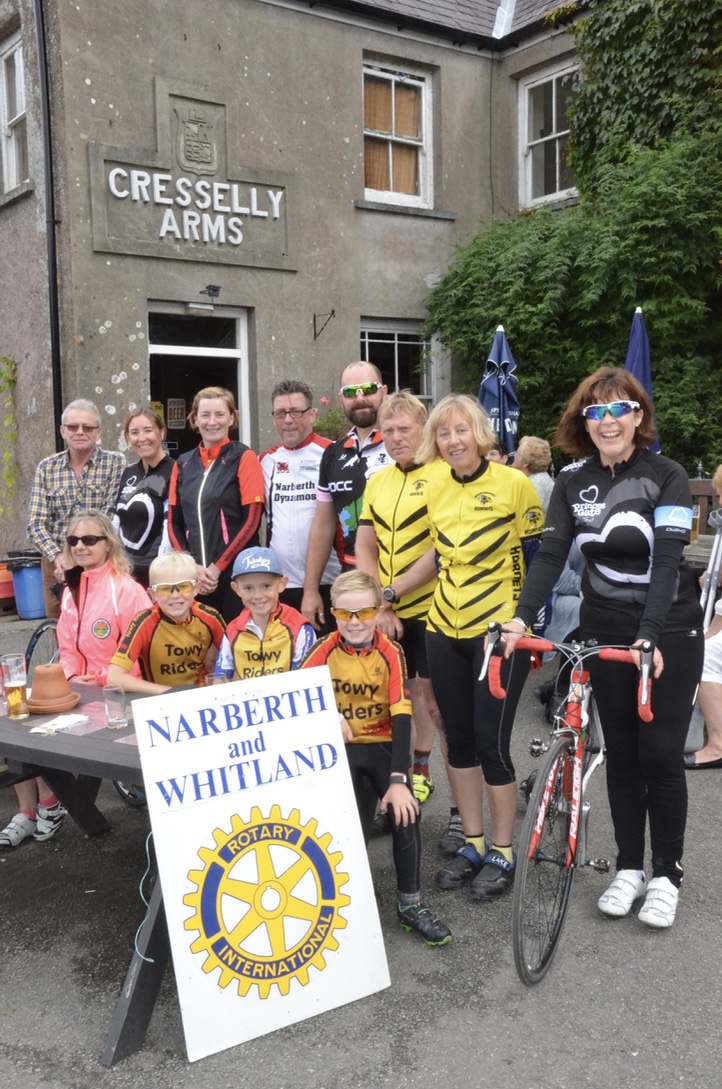 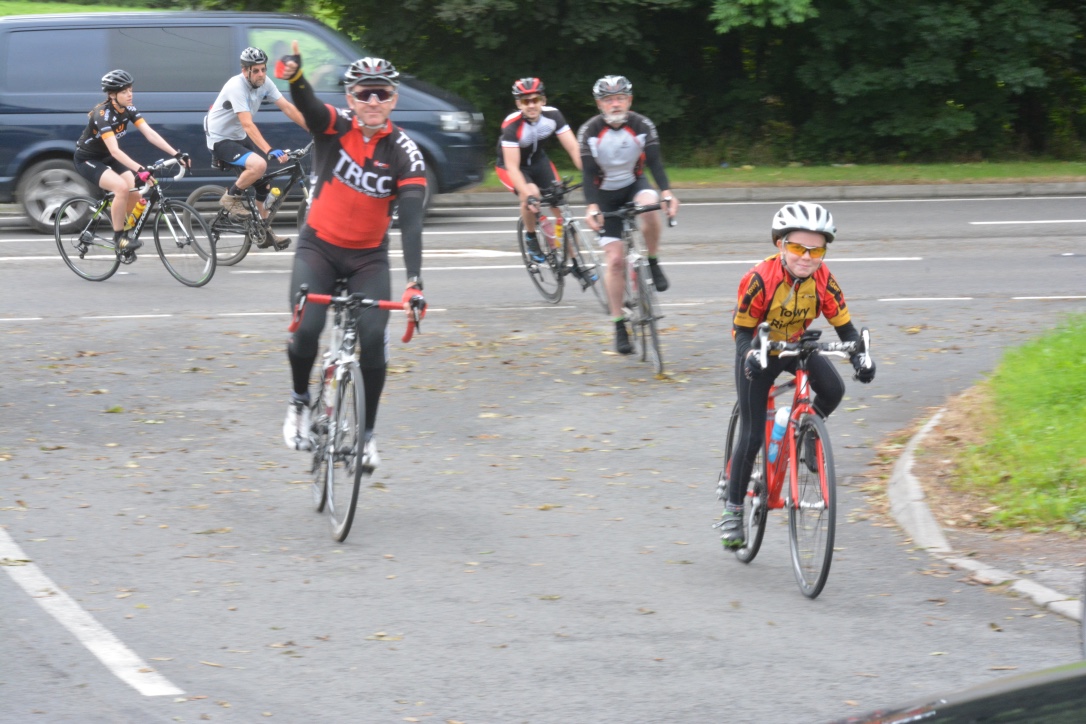 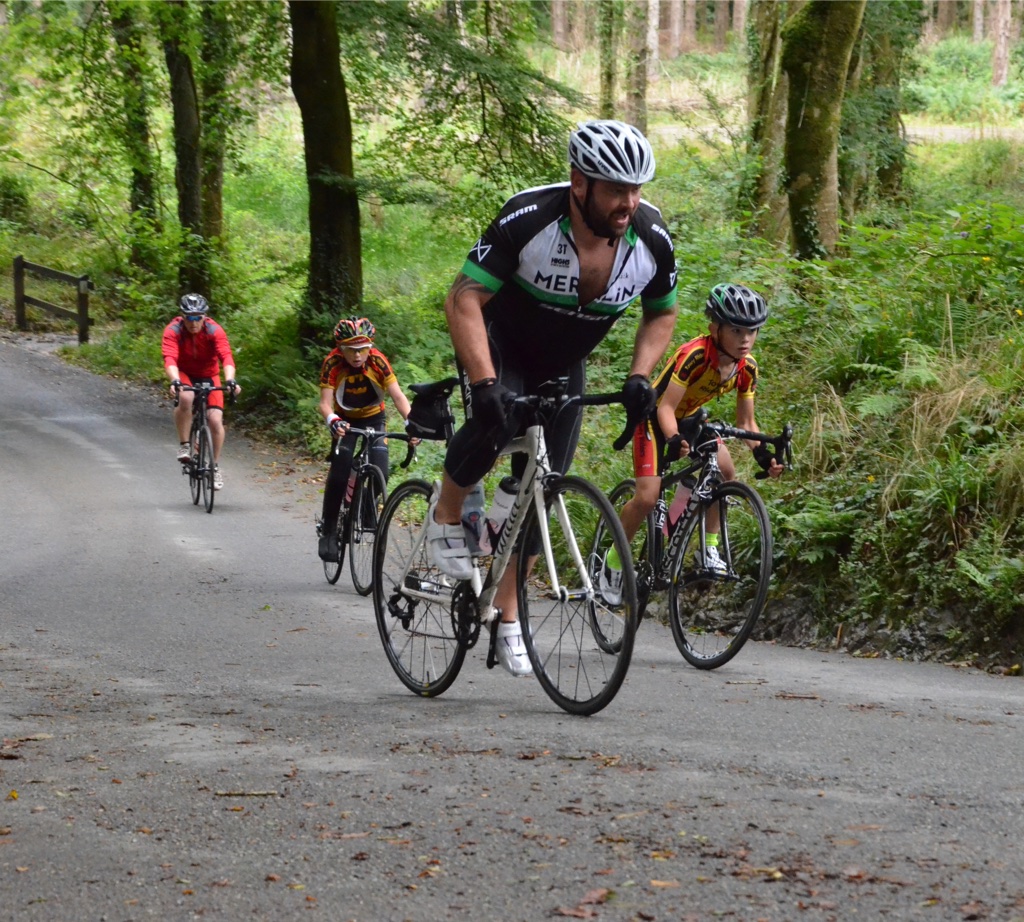 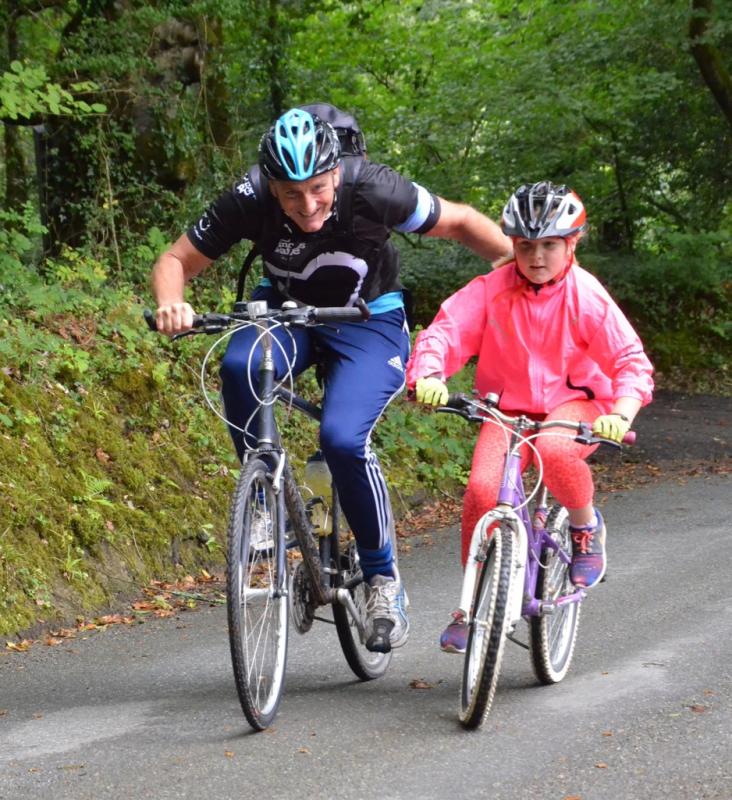 September Cycle Ride cheque presentations
Last September over 50 intrepid riders braved the elements to complete a ride around Pembrokeshire for charitable fun-raising. It was a family affair organised by Rotarian David Haward (on the right in the photos). Cyclists could choose whether to ride 10, 25 or 50 miles starting off from the Bloomfield Community Centre in narberth and finishing up at the Cresselly Arms, Cresswell Quay.
President of the Narberth & Whitland Rotary Club recently presented cheques to three organisations and the recipient in each case gave a short speech outlining the work of the respective organisation:
Emily Wells is the Regional Fundraiser for TENOVUS CANCER CARE. She explained that the money donated supports the work of Tenovus which was set up 75 years ago. During this year a 3rd Mobile Support Unit was commissioned costing over £1M. The units travel throughout Wales and can treat patients with Chemotherapy doses. Eight treatment chemo chairs are contained in the heated clinical environment enabling patients to have their treatment "Closer to Home" which was the name of the fundraising appeal.
On behalf of "Pembrokeshire Friends" of Prostate Cymru, Ian Gravell received the cheque donation. He explained that sine 2014 over £300K has been raised in Pembrokeshire. This money has supported the training costs for the "Davinci Robotic Laser" which is the first and only one to be installed in Wales. Surprisingly there are 47 such installations in England so Wales is only catching up slowly. The current fundraising campaign is titled "Save the Males in Wales"
Phil Harries received the cheque for Blood Bikes Pembrokeshire which was set up 3 years ago with just one Motor Bike. Phil explained the role of the volunteer riders who surprisingly are not funded by the NHS. They now have 3 bikes and transport at high speed  in emergency cases blood samples for analysis, Blood for transfusions, special formula milk for premature babies and prescription drugs.  The routes are basically between Pembrokeshire and Carmarthen hospitals and as far afield as Birmingham in exceptional cases. The latest bike has covered more than 18,000 miles in four months so their use is in great demand. Fund-raising efforts by organisations such as The Rotary Club of Narberth & Whitland are essential to keep the voluntary service running every weekend Friday to Sunday.
President Tony Ensom thanked the speakers for their informative talks. He also thanked Past President David Haward for organising the annual cycle ride. The next one will take place in September 2019 for which adverts and publicity will be announced early enough for riders to join in again.