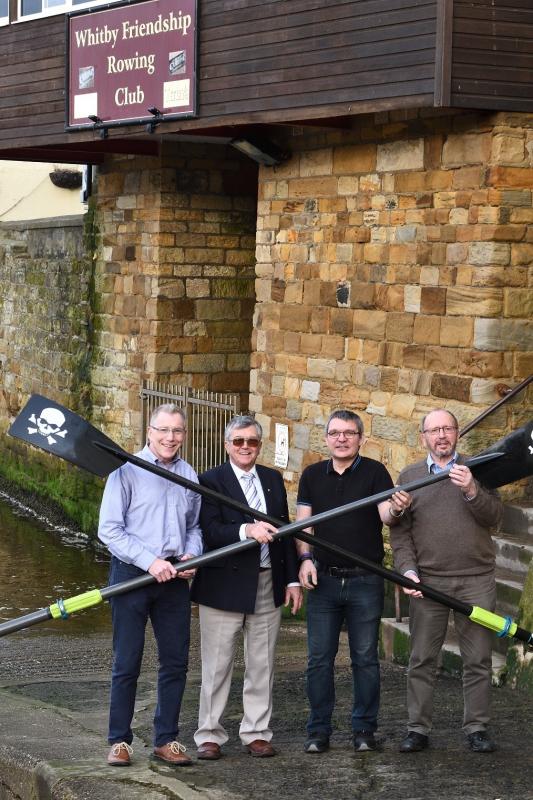 Some 2 years ago Pickering Rotary Club were fund raising for Marie Curie, and the Rotarians came up with the idea of taking a Yorkshire Cobble to Venice. The cobble was modified to look like a pirate boat.  The Rotarians towed the boat on a trailer right across Europe, and rowed it in an annual event called the Vogalonga. The project eventually raising £17,500 for charity. However, in the early days in preparing for the event it rapidly became apparent that the Rotarians had 2 problems. Whilst they had a boat, they had no oars, and if they had some oars they had little idea of how to row. Fortunately, Whitby Friendship Rowing club came to the rescue with some old wooden oars they no longer required, and some much need tuition on how to row a Yorkshire Cobble. As things progressed the Rotarians became more proficient at rowing, and with a donation from Persimmon Homes were able to acquire some state of the art carbon fibre oars. The oars were ex Cambridge eight oars, and were actually used in the boat race in 2014. With the Vogalonga project now finished, and the Yorkshire Cobble sold, which made yet more money for charity, the question of what to do with the oars arose. It was an easy decision, the oars should go to the Whitby Rowing Club for use by their junior rowers. Wooden oars by their very nature are heavy and difficult for the juniors to use. Carbon fibre oars are much lighter to use, and these rotary oars came with very racy Skull and Crossbones. Dave Clarkson from the Whitby rowing club Said” I am delighted that we have been able to assist Pickering Rotarians with their Vogalonga venture, and I am most pleased to accept the carbon fibre oars as they will be a great asset for the junior section of the club”. 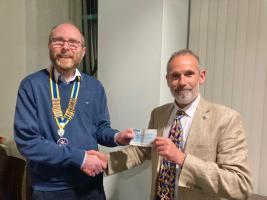