A Meeting Place for the Over 60's 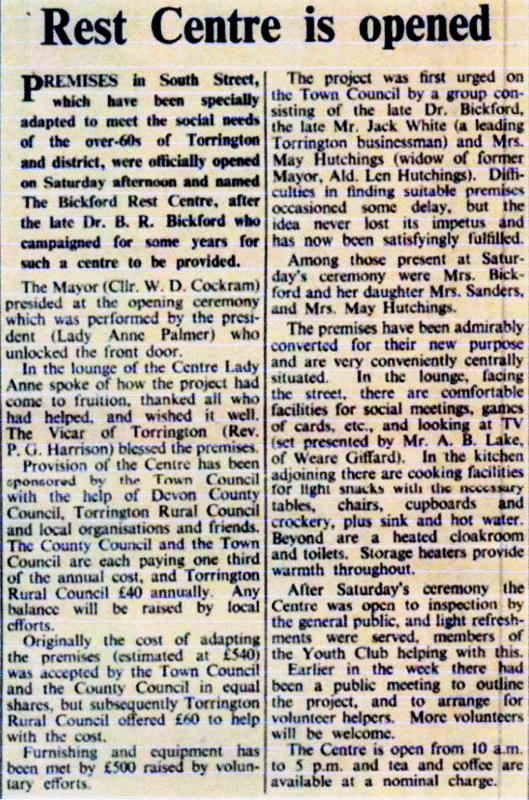 The Bickford Rest Centre ,as it was known then ,was opened in the mid nineteen sixties, I don’t know the exact date but I suspect that it was 1965.

The late Dr Bickford had campaigned for many years for such a facility to be provided, somewhere where retired people or the elderly living alone could meet and sit in comfort , converse and enjoy a coffee etc. And because of this it was named in his memory.  The article that I have included was cut from the old Bideford Gazette and records the opening day.

When the lease on the property expired in 1975 the Centre was due to close  but those that  used the Centre  were  loath  to lose this meeting place. With that in mind our Rotary Club decided that it should be saved and pledged  to raise the money to buy the freehold of the property. The building was owned by Mr J B Reed and he was sympathetic to this proposal and agreed to sell the property for £4000.     This money was raised by donation from Club funds and by interest free loans from members  in the short term to ensure that the purchase went  ahead. When the purchase was completed a trust was set up and our Rotary Club  gifted the freehold of the property to the Trust.

The Bickford Centre  Constitution states that we are open to everyone in Great Torrington and District over the age of sixty years .

At present there are eight Trustees and the Centre is run completely by Volunteers, it is open from 9.30am to 4.00pm and coffee and tea are served from 10.am to 12.00am

The property consists a three story , listed building, with the Centre on the ground floor and two residential flats on the floors above and the income from these flats subsidises the day to day running costa of the Centre and funds the maintenance on the building.  The layout and facilities have remained almost unchanged over the last fifty years and we are at present trying to obtain listed building consent to enable us to bring the facilities up to date. Watch this space! 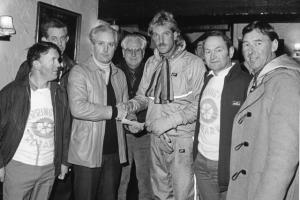