The Fishtail Fund works in partnership with a similar trust operated by the Rotary Club of Pokhara Fishtail. 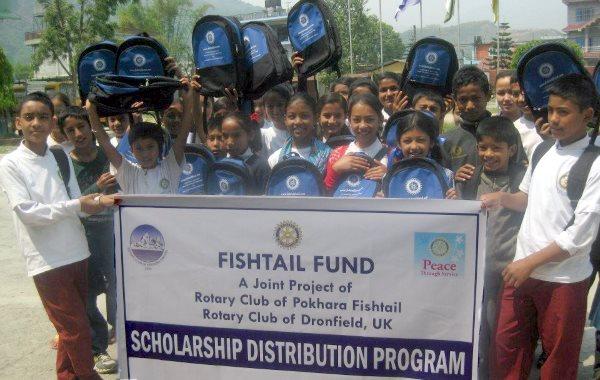 19 Club members were in attendance to hear David Lumb and Ian Ward from Dronfield Rotary Club talk to us about Fishtail Fund [FF], a Trust set up by Dronfield RC to help children from poor Nepali homes to stay on at school. The Trust works in partnership with a similar Trust operated by the Rotary Club of Pokhara Fishtail. David and Ian are both Trustees and are clearly passionate about FF having experienced first-hand the problems in Nepal keeping poor children in education beyond junior school due to the demands within their families to look after parents and younger siblings and to carry out menial work for very little money to sustain their families’ meagre existence. They gave us an insight into Nepal and its inherent beauty, being home to four of the world’s highest mountains – including Mt Everest. He then answered a question I and probably all other members wanted answering.........why is Fishtail Fund so called? He explained that it is the English translation of Machapuchare a mountain that overlooks Pokhara, the twin peaks of which look like a fish’s tail. He went on to describe how, as UK Coordinator for Fishtail Fund, he works closely with Bodin Koirala his Pokhara opposite number to identify children with suitable aptitude and enthusiasm who would benefit from continuing their education through senior school, and beyond in some cases. Currently FF has 50 students under its wing, all sponsored by donations to FF - including the funding provided by our Club over the past six years to help keep Rachana and Manisha in secondary education. Rachana completed her education last year and was seeking suitable employment, although she has left the Pokhara area so is no longer in touch with Bodin. Manisha has passed her ‘O’ level equivalent exams and is now in her final year of sixth form. She has ambitions to be a Lab Assistant and has applied for an 18-month vocational training course, for which our Club has agreed to fund the £1,300 cost, aided by a recently awarded £650 District Grant. We were told how FF does more than just support students through secondary education; it has been actively involved in helping to re-build a Pokhara school destroyed in the 2015 earthquake and is about to embark on concentrating its efforts to providing vocational training for successful school students to learn worthwhile career trades.

We wish FF continued success in its unstinting efforts to improve the lives of the very many poor families in Nepal.