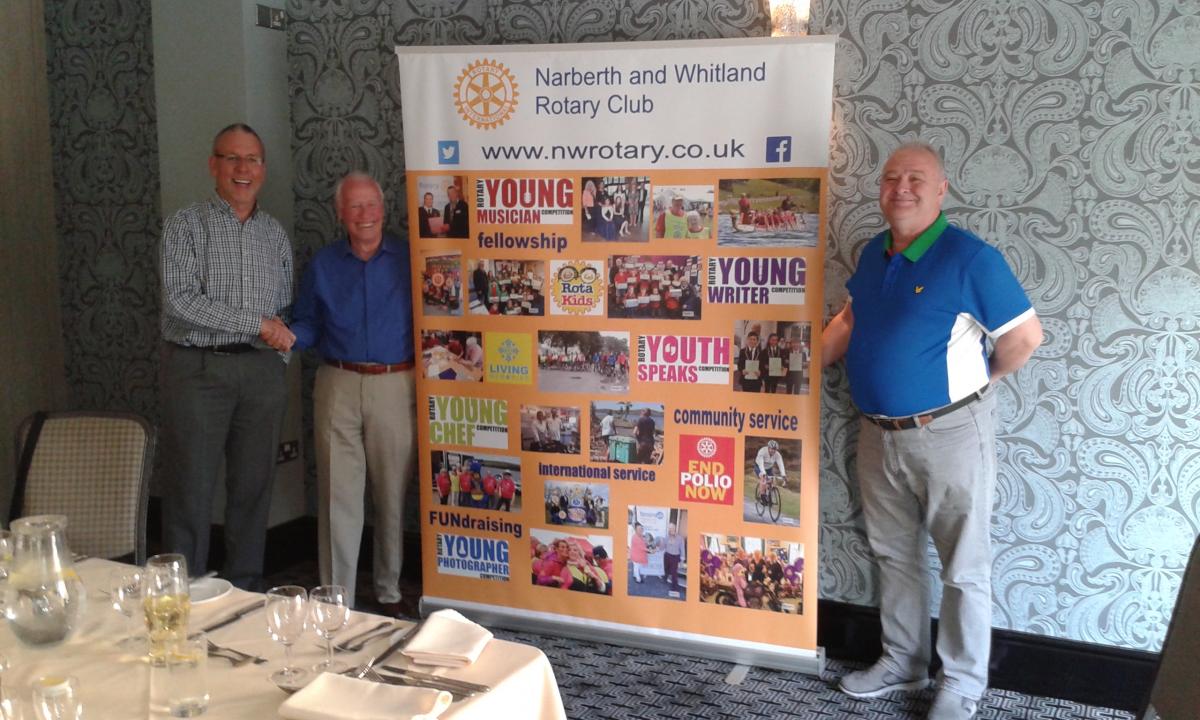 At a recent meeting in May, the President of the Narberth & Whitland Rotary Club received a long parcel which he was not expecting.

It was a black canvas shroud with carrying handles in which was contained a pop up display banner of plastic material with a heavy metal base about 1.5m long. Intrigued by this object he proceeded to stretch the material to its full vertical height and needed some assistance from Rotarians to fix the supports at the rear.

He then discovered that it had a display on the front containing artwork and photographs of various activities carried out by the club over recent years. He was pleasantly surprised to learn that it was a gift to the club donated by longest-serving member Rotarian Ken Morgan.

Ken explained to the assembled gathering that he joined the Rotary Club in May 1984 so after 35 years of voluntary service he wanted to commemorate his association with the club by giving the club something very useful in publicising their activities in a very graphic and colourful way. In fact he had colluded with Rotarian John Hughes secretly to arrange the gift and it was John who very kindly arranged all the artwork and contacted printers to deliver the item by the due date.

Rotarian Ken gave a brief history of his involvement since all of the members were not in the club  35 years ago and he felt that had been some memorable changes in the succeeding years. Briefly, he joined the  club when it met only during the lunchtime but after a few years it changed to its current format of evening meetings every Wednesday. At that time it was a single gender club but it became dual gender nearly two decades ago when Ken introduced the first three ladies into the fold.

During his time Ken was twice elected President. Nearly twenty Years ago he was awarded a Paul Harris Fellowship and within the last decade was honoured to receive a Paul Harris badge with Sapphire in recognition of his efforts in promoting the club. In all he has brought into the club over 20 new members some of whom are still active and contribute to the club affairs.

In the late 90’s he set up a Twinning Association with the club at Fontenay Le Comte in the Vendee, Western France. This twinning is still going strong and regular biannual exchanges are made to learn more of the culture and service activities that each organisation maintains.

Ken commented that he is proud to be a member of the club which is very active in community affairs and he is still as enthusiastic as ever for the ideals of the Rotary movement, the motto, of which, is “Service above Self”. In the photo Ken Morgan (left shaking hands with President Tony) and on the right John Hughes who designed the artwork.