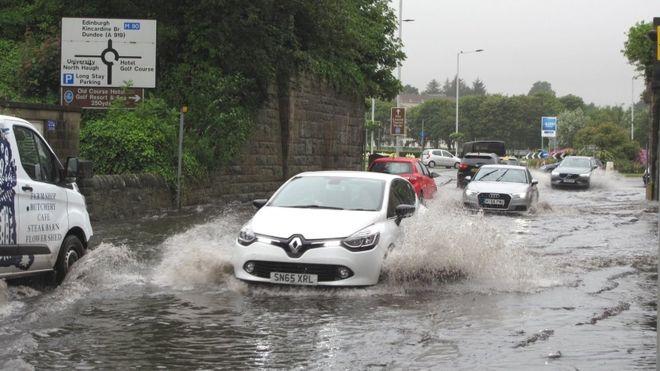 Alastair Dawson, an Honorary Professor of Dundee University, provided a talk and slide show on “700 Years of St Andrews Weather and Climate”.

Alastair has been researching Scottish weather history for some 20 years and his investigations have produced fascinating results on climate issues stretching from Viking times around the 12th century to the present day. Much to the surprise of his audience, Alastair stated that conditions in the waters of the North Atlantic have historically been paramount in contributing to our climate and do so to this day.

For example, the Viking expeditions from Scandinavia which eventually reached North America via Iceland and Greenland were only possible because sea ice was absent, allowing reasonable sailing conditions across the Atlantic Ocean. It wasn’t always thus….

Some charts and ships’ logs from the last 1000 years show that Atlantic waters were warmer in Viking times but from the 1400s became much colder allowing sea ice to form over huge areas of water.

Even the whaling industry based in Dundee in the 19th century was affected as sea ice restricted movement north. There is evidence to show that in the 17th century Inuits – known then as Eskimos – were driven south by sea ice, landing in kayaks in the Orkneys, the north of Scotland and even in one celebrated well-documented case landing just north of Aberdeen. The solitary Eskimo of that event succumbed to hypothermia three days after landing.

The Atlantic “storm tracks”, which Alastair explained, could interact with cold air from the North and cause gigantic storms. This was prevalent in the 19th century and caused many shipwrecks and the loss of entire fishing fleets both in the Atlantic and along Eastern coasts and the North Sea.

There was a marked reduction in Scotland’s storms towards the end of the 19th century, but some episodes of extreme weather continued beyond the turn of the century. There is documented evidence to show that one extreme bout of snow meant that folks living on Market Street, St Andrews, were forced to dig tunnels under the snowfalls to exit their homes!

Alastair’s conclusion that the North Atlantic, allied with the varied up and down radiation from the sun, has a pivotal role in deciding weather patterns for all of Northern Europe shows indeed that there are much greater climate complications than seen on the telly’s evening forecasts!

Jim Allison’s vote of thanks noted that Alastair’s illuminating presentation also highlighted issues connected with global warming but that that also has greater complications.