Today we had three visitors from Essex Search and Rescue. Two spoke and the other did not utter a word. That was understandable, as it was one of their search and rescue dogs that had come along with its handler.

Essex Search and Rescue are the Lowland equivalent of Mountain Search and Rescue, one of a number of such Lowland Rescue units around the country. They search for missing vulnerable people, such as children and dementia sufferers. As the name implies, they concentrate on missing persons in Essex but the various units support each other as necessary, with other county units sometimes sending personnel to help in Essex and vice versa. All the personnel are volunteers. 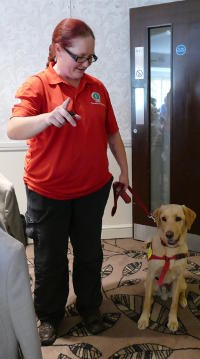 We heard particularly about the dog units. Parker, the dog that came to us, is an airscenting dog. They are trained to work off a lead find a human by following the scent in the air. When they have located a person, they return to alert their handler and take him or her to the site. Being off the lead they can range over a large area. The disadvantage is that the scent they look for is a general human scent and not person-specific. That means the handler could find that the dog has found someone simply sitting quietly reading a newspaper!

The dogs, of course, do not know that they are looking for someone because that person needs help. They do it because they receive a reward if they are successful. Therefore if a dog does find someone simply reading a newspaper, it is still given a reward because it has done what is was supposed to do. (Find a human by scent.) However, the handler makes it clear to the dog that there is still someone else to find.

The other main type of dog used by Essex Search and Rescue is the tracking dog. This tracks down a specific person by individual scent in the same way as bloodhounds do in certain works of detective fiction. Indeed, some of them are bloodhounds. As part of the training a volunteer may make his or her way through a wood and hide somewhere. The dog will be brought out to follow the trail a couple of hours later. We were shown a map of one such hunt showing the route the volunteer had taken and the almost identical route the dog had taken when tracking him down.

The tracking dogs work on long leads. Apparently handling them can be hard work as they are enthusiastic about what they are doing and likely to set a fast pace and pull hard.

As well as the dog units, Essex Search and Rescue have other specialist units, such as mountain bike and water units. It was founded in 2002 following a well-publicised search for a missing person who unfortunately was never found. It started with six volunteers and today has 57.

The dogs are owned by their handlers, who have to devote a considerable time each week to training them. They are trained to avoid distractions like rabbits and other dogs. Intelligent breeds like having meaningful tasks to do.

Only the police can call out Essex Search and Rescue. Last year was there busiest to date; they were called out 97 times. So far this year has proved quieter, possibly due to the warm and sunny weather.