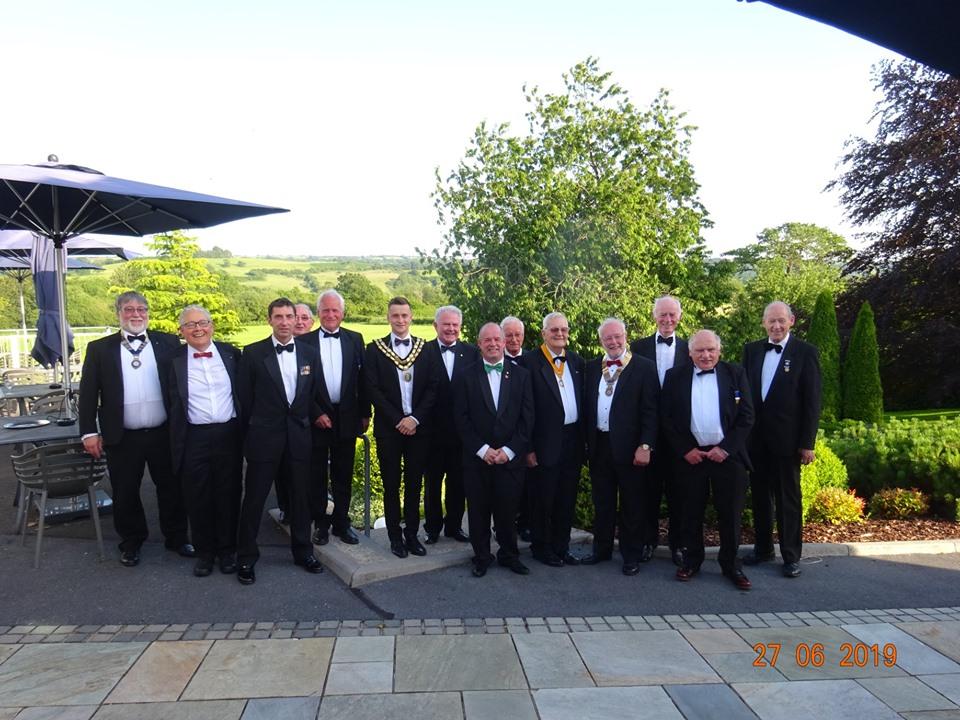 Llandeilo Rotary has donated a significant sum towards the cost of removing most of the laurels from the churchyard boundary of St Teilo's Church in Llandeilo . This has reduced the cost of ongoing maintenance and also opened the view into the churchyard , with its rich collection of trees to passers by . This was funded by Llandeilo's Rotary Coop Community Fund and the club would like to thank the Coop for their support 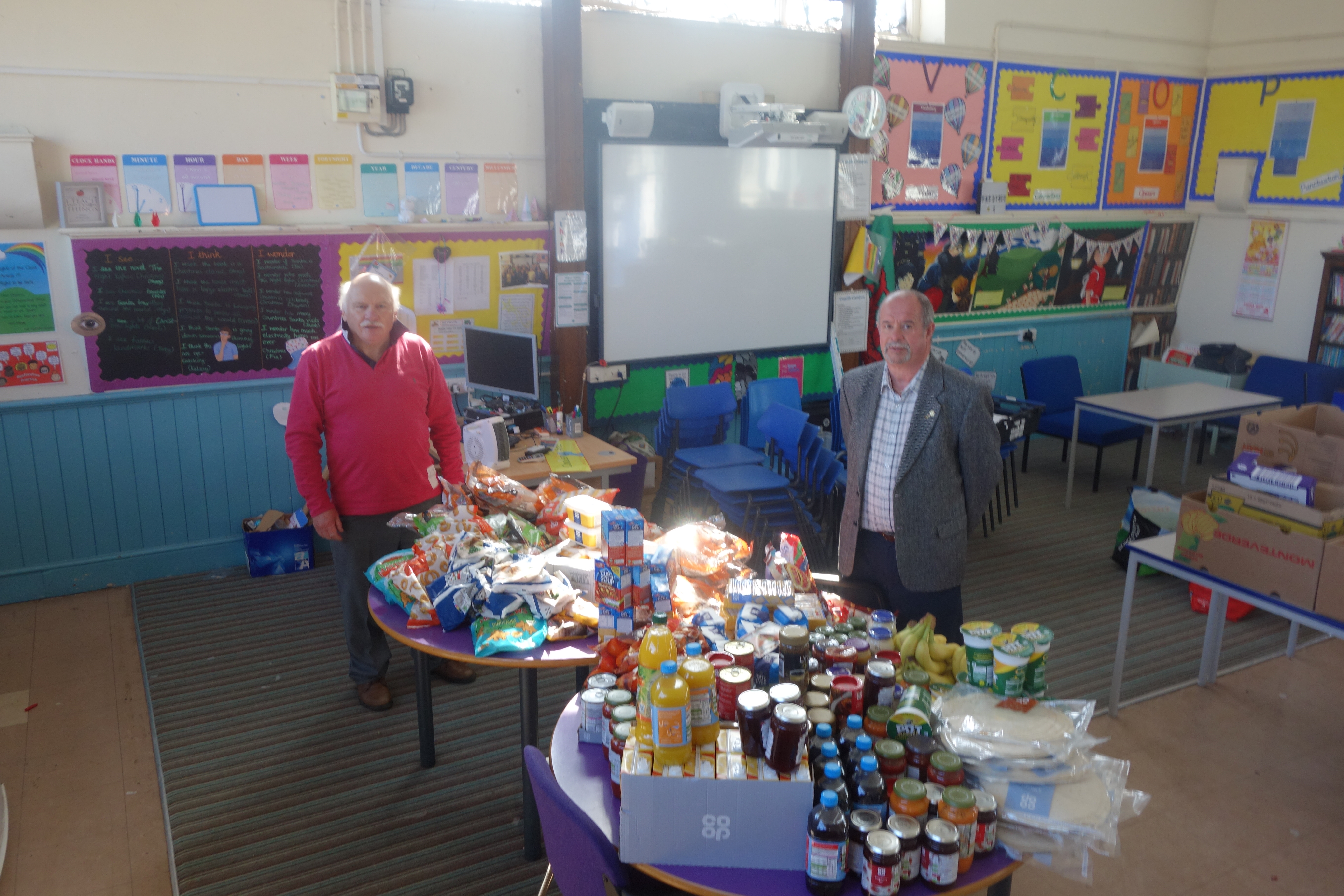 On  the 15th April Llandeilo Rotary assisted the local community at this difficult time by making a significant donation from its 2018 Co-op Community Fund to the Llandeilo Community Food Hub . The picture shows the food items purchased at Llandeilo Co-op, with Colin Jenkins (right)), Llandeilo Rotary Community Officer and Richard Hughes (left)) who liaises with the Co-op on behalf of Rotary . Despite coming up with the initiative, club President Gordon Kilby was unfortunately unable to be present due to the current coronavirus restrictions. However, in commenting he said ; " As Rotarians, we are pleased to be able to assist our local community at this challenging time. We are also grateful to Lynne Williams and Catrin Thomas from the Food Hub for their assistance in buying the food items and to the Co-op for its financial support through its Community Fund"

The lower photo shows Rotary Community Officer Colin Jenkins with the 2 ladies from the Food bank Lynne Williams and Catrin Thomas who coordinated the shopping and the food delivery . The Club would like to thank them both 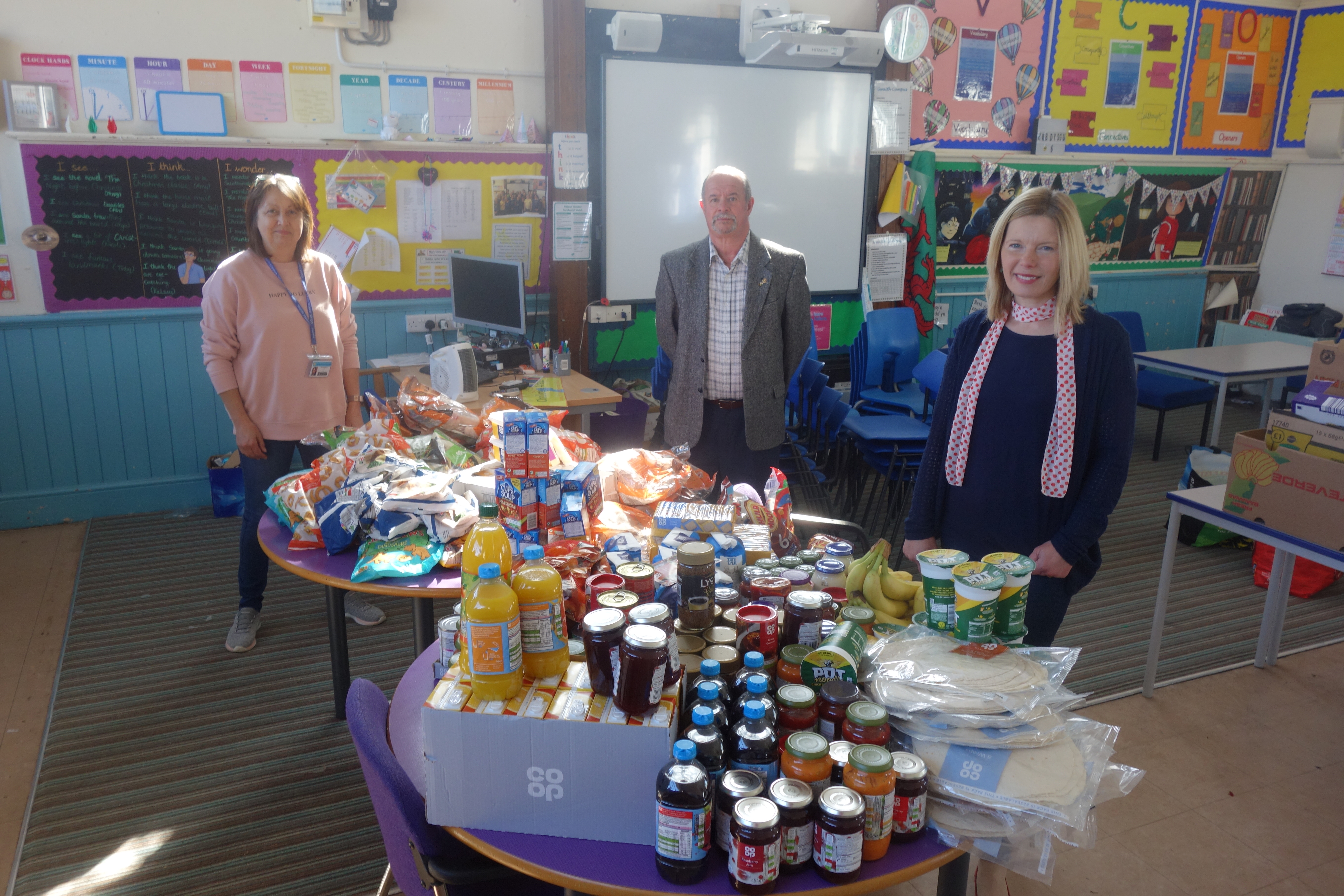 Thursday November the 14th Llandeilo Rotary welcomed Bronwyn Davies and Zac Spencer to give a talk on their experience at the Ryla camp at the Storey Arms Brecon . Both students from Bro Dinefwr were sponsored by Llandeilo Rotary .Rotary Youth Leadership Awards (RYLA) is an intensive leadership experience organized by Rotary clubs and districts where you develop your skills as a leader while having fun and making connections.. Both Bronwen and Zac had thoroughly enjoyed their week at the RYLA camp taking part in a lot of different activities. These activities were designed to help develop leadership and team bonding skills and to increase personal confidence. They included gorge walking ,climbing , canoeing and caving with both students leading their team on a set activity. They particularly enjoyed the leadership aspect which gave them the opportunity to encourage less confident members to meet the challenges of the activity. Both Zac and Bronwyn said the course had a big impact on their confidence and leadership skills and that they had made a lot of new friends. The picture below (left to right) shows Howard Beynon (Junior Vice President )Bronwyn Davies Chris Parish (Senior Vice President ) and Zac Spencer 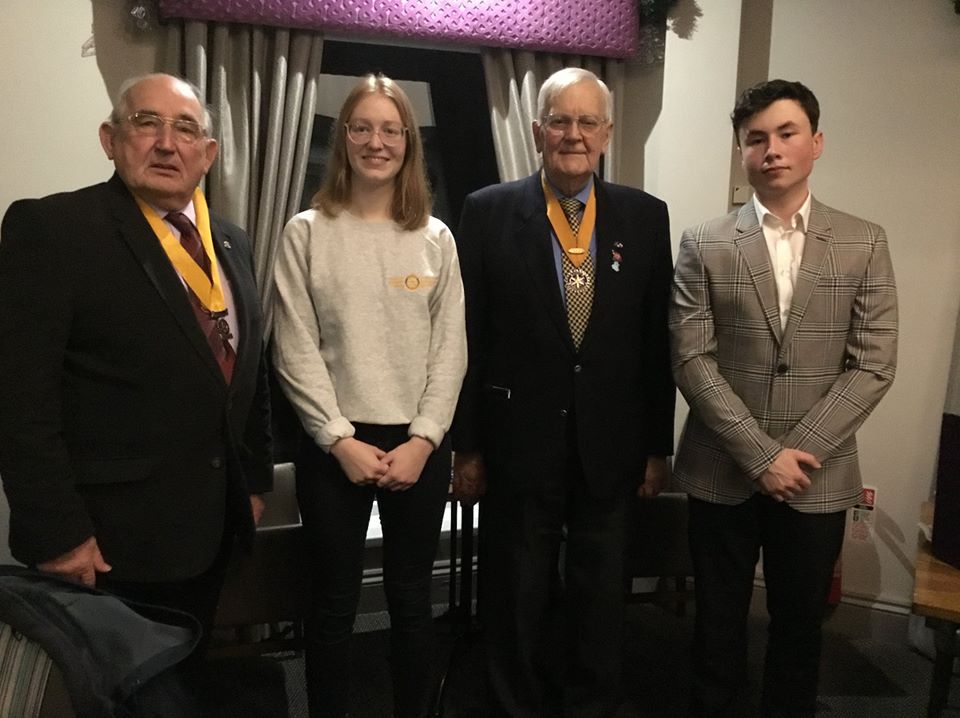 Mydrin was representing Ammanford Food Bank and he gave a talk on what the Food Bank represents. He emphasised that Ammanford Food Bank would never have come into being without the tremendous support of the local community and he quoted the phrase "Together we make a difference".
Mydrin mentioned that everyone is talking about Food Banks and it seems that they are almost accepted by society today.
As Britain is the fifth richest country in the world, a recent census gave a population of 67 million of which 14 million live in poverty.  This figure includes 5 million children.
In Wales he mentioned that the biggest challenge facing the Welsh Government is child poverty with a statistic of one in every five children living in poverty.
The speaker then gave a brief history of Ammanford Food Bank that was established in 2013. With support from Ammanford Tesco and many  generous private donors and backed up by a loyal army of local volunteers the organisation fulfills an urgent need.
Starting life in a portacabin, today the food bank is housed in three large steel containers.
It is one of some 500 food banks throughout Britain and in the last 5 years usage has increased by 75% An interesting statistic Mydrin mentioned is that food banks are used by 40-50% of people who are in employment. In 2013 donations to Ammanford Food Bank amounted to 2 tonnes, this has increased to 100 tonnes today.
An interesting talk prompted a lot of questions following which the vote of thanks was delivered by Senior Vice President Christopher Parish. 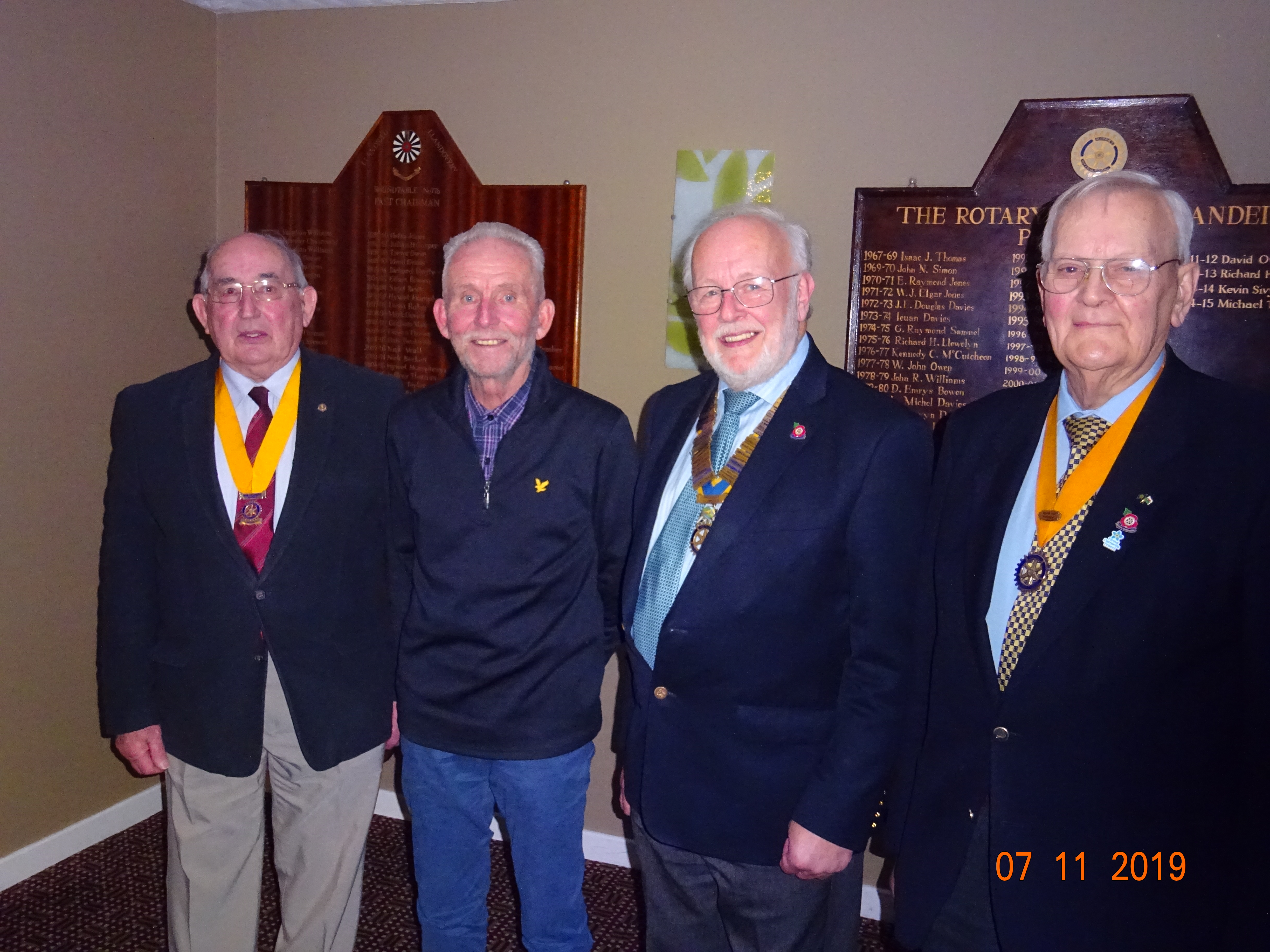 Many people with Dementure also start to behave in ways that aren’t normal for them. These might include becoming agitated (for example, being very restless or pacing up and down), calling out, repeating the same question, having disturbed sleep patterns or reacting aggressively. This can be distressing and challenging both for the person and anyone caring for them. The person may need treatment and support for these behaviours which is separate from any treatment specifically for memory problems.

In the later stages of Dementure someone may become much less aware of what is happening around them. They may have difficulties eating or walking without help, and become more and more frail. Eventually, the person will need help with all of their daily activities.

Leslie pointed out how important it was to be patient with people suffering from dementure and to be dementure friendly . The Rotarians were quizzed on different aspects of dementure and how they can be recognised 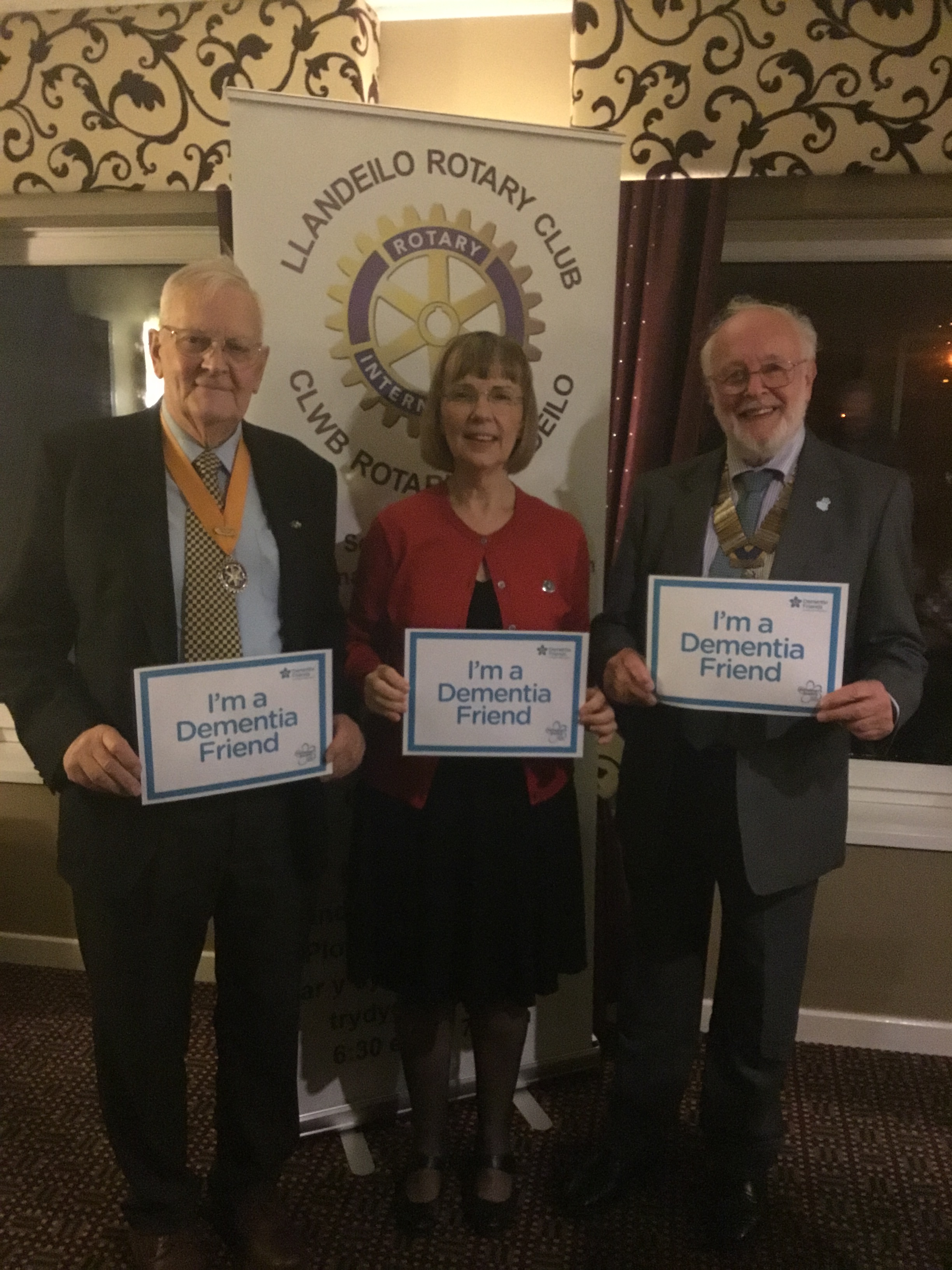 Cancer Research Wales is the leading independent cancer research charity in Wales.  They  receive no government funding whatsoever and rely solely on the generosity of the general public to fund their amazing work through fundraising activities, donations, legacies and income from our shops.   Over £1 million per year is invested in Wales looking in to the prevention, early diagnosis and better treatments of cancer.

Every 30 minutes someone in Wales is diagnosed with cancer. Thanks to research, more people are surviving cancer than ever before, and the number of people currently living with a cancer diagnosis in Wales would almost fill Cardiff’s Principality stadium twice over. In spite of this, around 9,000 lives in Wales are still lost each year.

Dr Beth Routley spoke about their work investigating the role of the HPV virus in certain types of head and neck cancer in men. These findings were instrumental in the decision to extend the HPV vaccinations in the UK to include boys as well as girls, for whom it is already given to prevent cervical cancer.

She also explained how some cancers are more difficult to detect and late diagnosis is associated with poorer outcomes, but also showed how they are addressing this issue by funding work taking place at Swansea University to develop a new, non-invasive blood test to diagnose bowel cancer. This test is currently being trialled in GP surgeries in South Wales.

Finally, we heard about an exciting clinical trial that was recently funded by Cancer Research Wales. This immunotherapy trial harnessed the power of the immune system to treat late-stage bowel cancer patients. On average, patients lived for an additional 10 months, with few side effects and good quality of life. This study represents a significant advancement for bowel cancer, which is the second greatest cause of cancer related death in Wales, and has traditionally failed to benefit from discoveries in immunotherapy”. 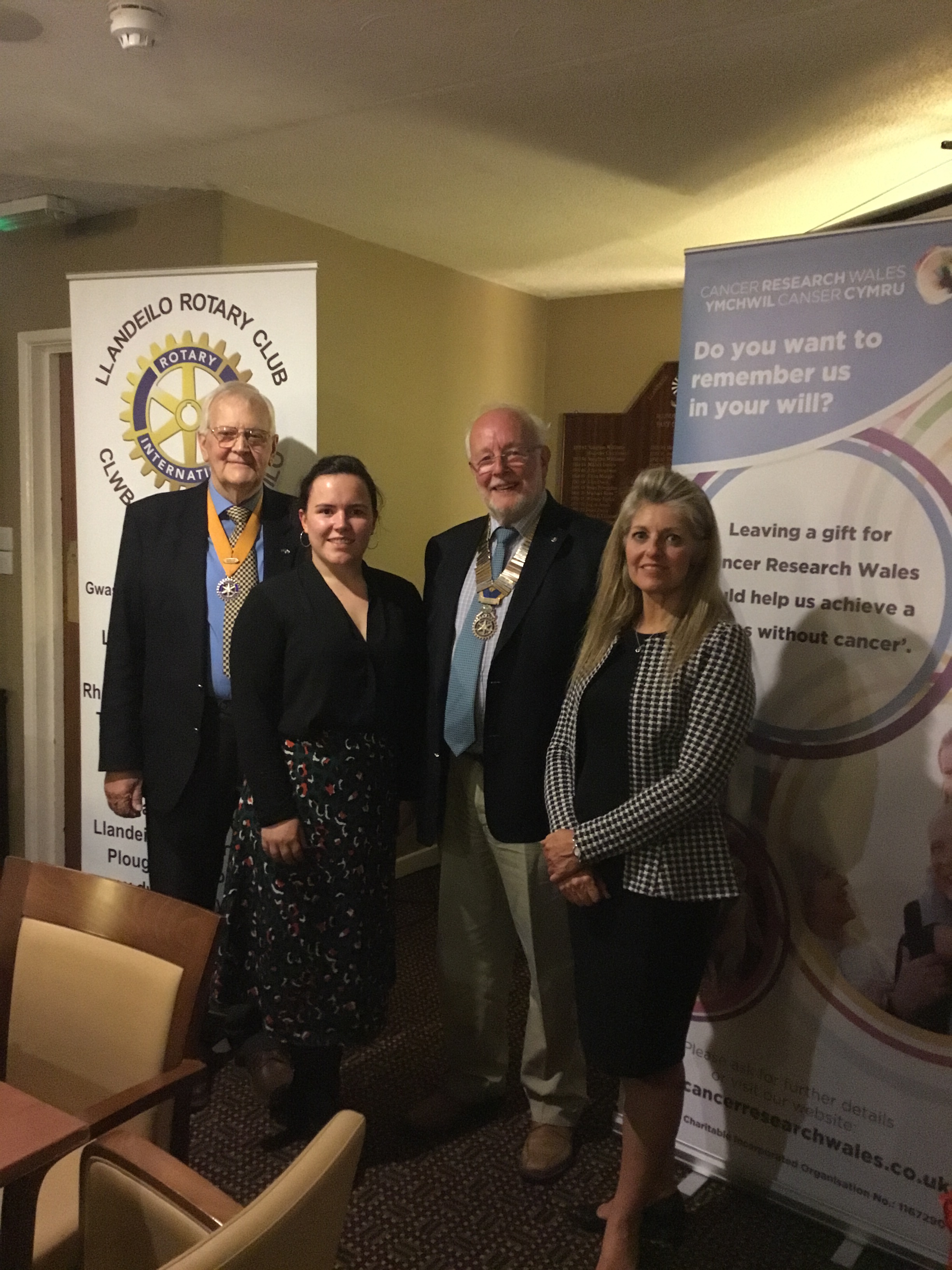 Tuesday, 30 July marked a significant date in Llandeilo Rotary Club's history when an evening was held at the Plough Inn, Rhosmaen to mark the occasion of a Rotary Youth Exchange. The Family to Family exchange was between Wales and France. This date coincided with the same date as United Nations Friendship Day.

The two girls Catrin Duff of Wales and Morgane Latapie of France were involved in an exchange visit arranged by Llandeilo Rotary Club; the first of its type ever arranged by the club.

Also representing Rotary were Eric Blackwell and his wife Liz. Eric is the District Youth Exchange Officer for the Rotary District of Southern Wales. Eric remarked that the Llandeilo Club was one of only four clubs in RGB&I (Rotary in Great Britain and Ireland) that undertook a similar exchange during 2019.

The one to one exchange involved a visit to the two countries where each family looked after their guest and took them around the area.

In France Catrin was welcomed into Morgane’s home. She improved her French and absorbed the local customs. She was shown the sights and was involved in Festivals, undertook horse riding in the Camargue and visited Marseilles town and the cathedral.

Whilst in Wales Morgane lived with Catrin’s family in Llandeilo. She visited nearby Garn Goch, spent a day at the Royal Welsh Show, visited the town of Barmouth and went camping on Cadair Idris.

During their visits each girl made a presentation to the local Rotary Club. Catrin to Rotary Club d’Istres in French and Morgane to Llandeilo Rotary Club in English.

This proved to be a popular evening with over 20 people attending including Rotarians, their wives and guests, Ladies of Inner Wheel and the family of Catrin Duff.

Rotary organises Camps and Tours for young people from 15 to 25 and Family to Family exchanges for 15 to 17 year olds. A Camp or Tour will have about fourteen young people all the same age and each one will come from a different country. A great way to make friends around the world. Exchanging with a Family helps you to understand another culture and learn or improve your knowledge of a foreign language.

If you are interested in taking part next year visit our website at www.youthexchange.org.uk . It is open for registrations of interest on 1st September 2019. 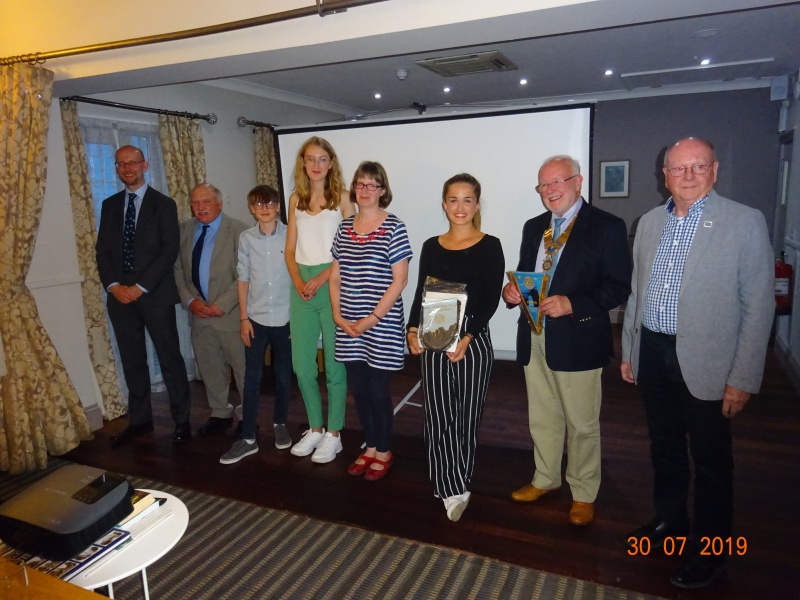 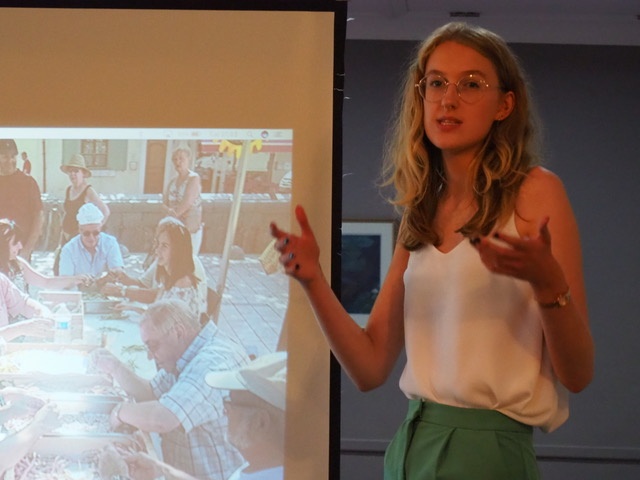 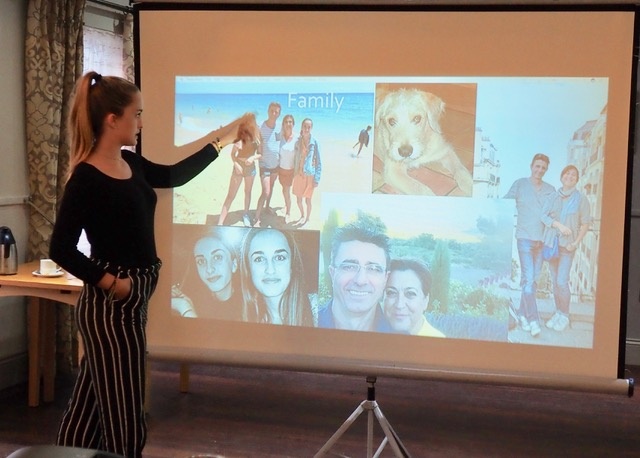 On Thursday, 27th June Colin Jenkins handed over the Presidency of Llandeilo Rotary Club to Gordon Kilby.
The brief ceremony attended  by members of the club was followed by an evening meal courtesy of the Plough Inn, Rhosmaen and was well attended by Rotarians and their wives and guests and Ladies of Inner Wheel.
Guests included the Mayor of Llandeilo Fawr Owen James and his wife Jordon, Sonia Beynon President of Inner Wheel,Councillor Edward Thomas and guest speaker Dr Rhys Thomas.
Later that evening a raffle raised £175 for charity. President Gordon then thanked Immediate Past President Colin Jenkins and reminded Colin that although he had been Mayor of Llandeilo Fawr on three occasions he had only been President of the club once so far!
Gordon then outlined his objectives over the coming year and these included the club becoming more involved with local community issues particularly with the parks that the Town Council have been given control of by the County. The issue of club membership with the President targeting one new member every month throughout his year in office.In addition the President wished to have closer links with neighbouring clubs and his Club Calendar was to feature a speaker once a month.
The President got off to an excellent start when he introduced the evening's guest speaker Dr Rhys Thomas who had just become the first new Rotary member.
Rhys introduced his talk entitled "A Life Less Ordinary".This was about his involvement in Sierra Leon in East Africa when the British Army sent in a force to confront the "West Side Boys"who had taken Western hostages.
Rhys expanded his talk to include his 17 years in the army covering many conflicts around the world and his involvement with the Wales Air Ambulance which was founded on the St: David's Day 2001 and which is today considered to be the finest ambulance service in the world.
Senior Vice President Christopher Parish gave the vote of thanks.
PHOTO-Left to right David Tiddy 41 Club, Councillor Edward Thomas, Dr Rhys Thomas, Howard Beynon (Rotary), David Owen (Rotary), Mayor Owen James, Nigel Haines (Rotary), Immediate Past President Colin Jenkins, Ken Griffiths (Rotary), Senior Vice President Christopher Parish, President Gordon Kilby, Michael Taylor (Rotary), Richard Hughes (Rotary) and Kevin Sivyer (Rotary).