The history of Barrow in 20 minutes

Gordon Turner tells us how our town came to be. 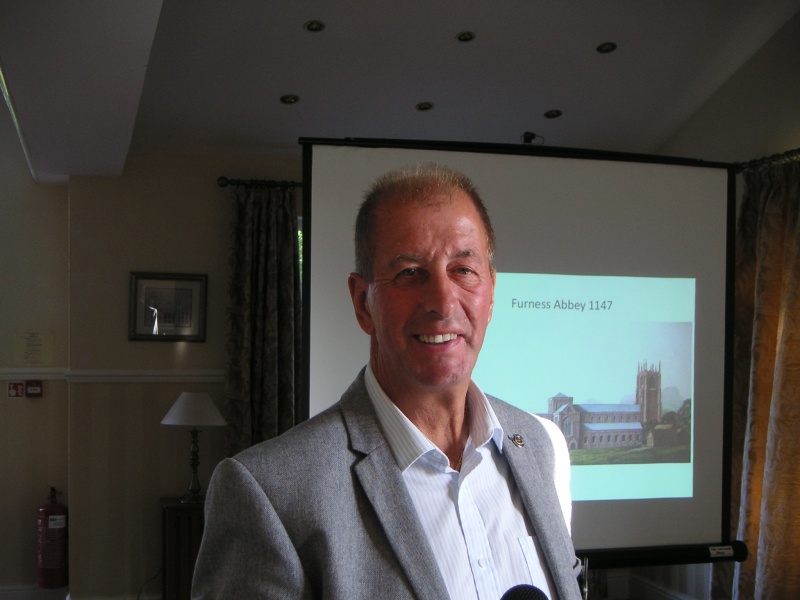 Gordon began by showing a slide of Furness Abbey in all its glory in 1147. He said it was one of the richest places in the world, so rich in fact that even the King used to borrow money from them.
He then told us that the earliest record of Barrow, then called Barrai was in 1190, it was only a tiny settlement subservient to Dalton which was then the principle town in the area.
During the middle ages the hamlet’s name changed firstly to Old Barrow Insula, then in 1537 to Barrowhead. But it was not until the 19th century  that any real growth occurred, when haematite ore was found it sky-rocketed. During 1871 with a population of 45000 it was known as the “English Chicago” after emulating the rapid growth and layout of that city.
The considerable amounts of iron ore mined led to a railway system, initially linking production centres with Roa Island where ore was despatched by sea to all points of the compass. Subsequently the dock system was also established to service the prodigious production of ore.
The 19th century saw the place change from a hamlet to a town with “Municipal Borough” status and in 1867 the beginning of building the town hall.
Shipbuilding began in1852 with the launching of the “Jane Roper” a 93 ton schooner (sailing vessel). She was lost 1886 when she foundered off the Frisian Islands during a passage from Ramsgate to Edinburgh. There were no survivors.
The first steam ship to be built was the Duke of Devonshire, a 3000 ton liner in 1873. Since then countless ships have been produced and the builder has had numerous re-incarnations. Barrow Shipbuilding Co in 1867, then in 1897 it became Vickers Son & Maxim, then Vickers Ltd in 1911, Vickers Armstrong in 1927.
In the recent past  after a few more changes and purchase by BAE we have the present day company, BAE Systems.
In 1876, Barrow was home to the largest steelworks in the world, stretching from the docks system to the slag bank. On the western edge was iron smelting which began in 1859 when they established the Ironworks of Schneider and Hannay and Co, then in 1864 the Barrow Haematite Steelworks on the eastern flank. Centralising of iron and steel and cheaper foreign supplies saw the demise of both iron smelting and steel production and eventual clearance of both sites to form the current industrial estate.
President Brian called time on his talk as he was just getting into showing numerous photographs of the town - a bustling Dalton Road full of shoppers and streets almost devoid of cars, the hordes of cyclists leaving the shipyard and swarming around corporation busses trying to get to Walney.
After a short question time, Brian Pugh proposed a vote of thanks, remarking that during his apprenticeship he had observed machines in the “yard”, still with labels on the Vickers Son & Maxim, almost 100 years later !