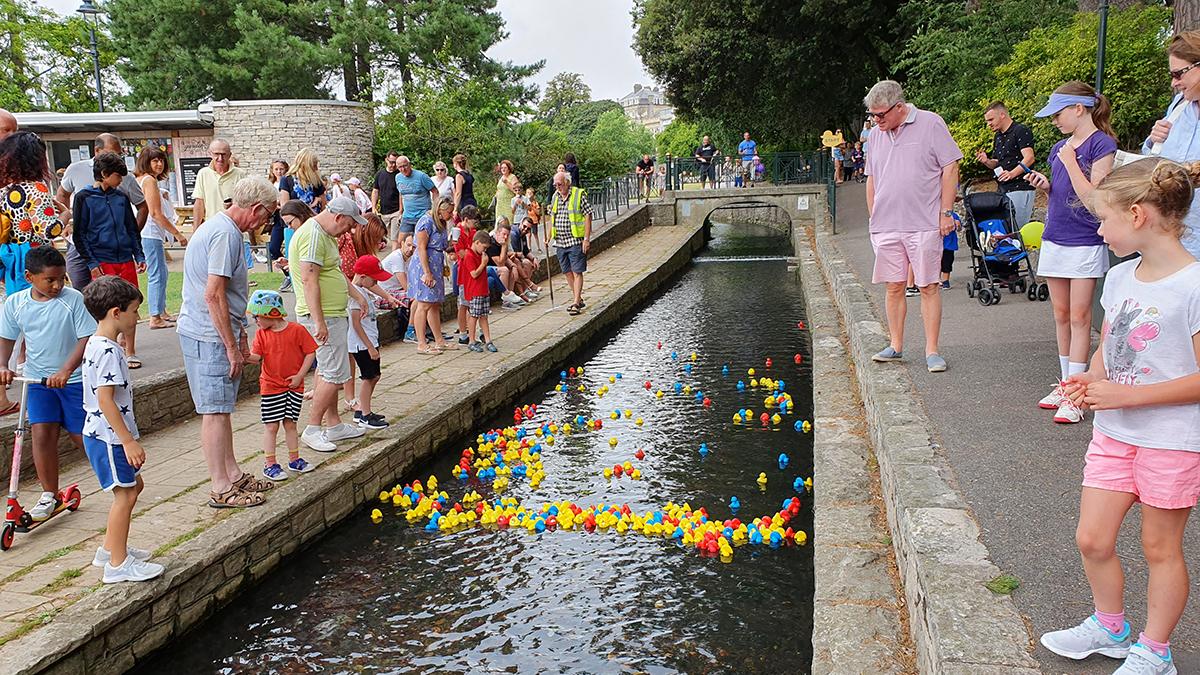 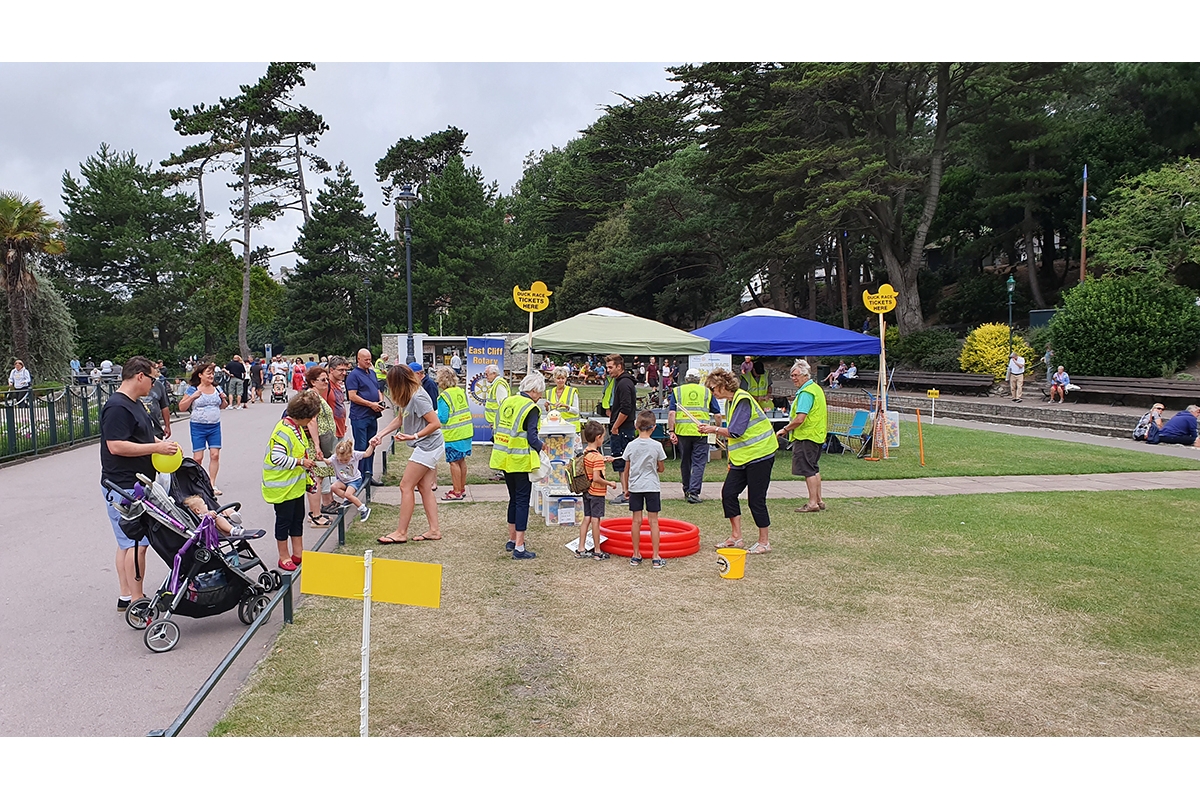 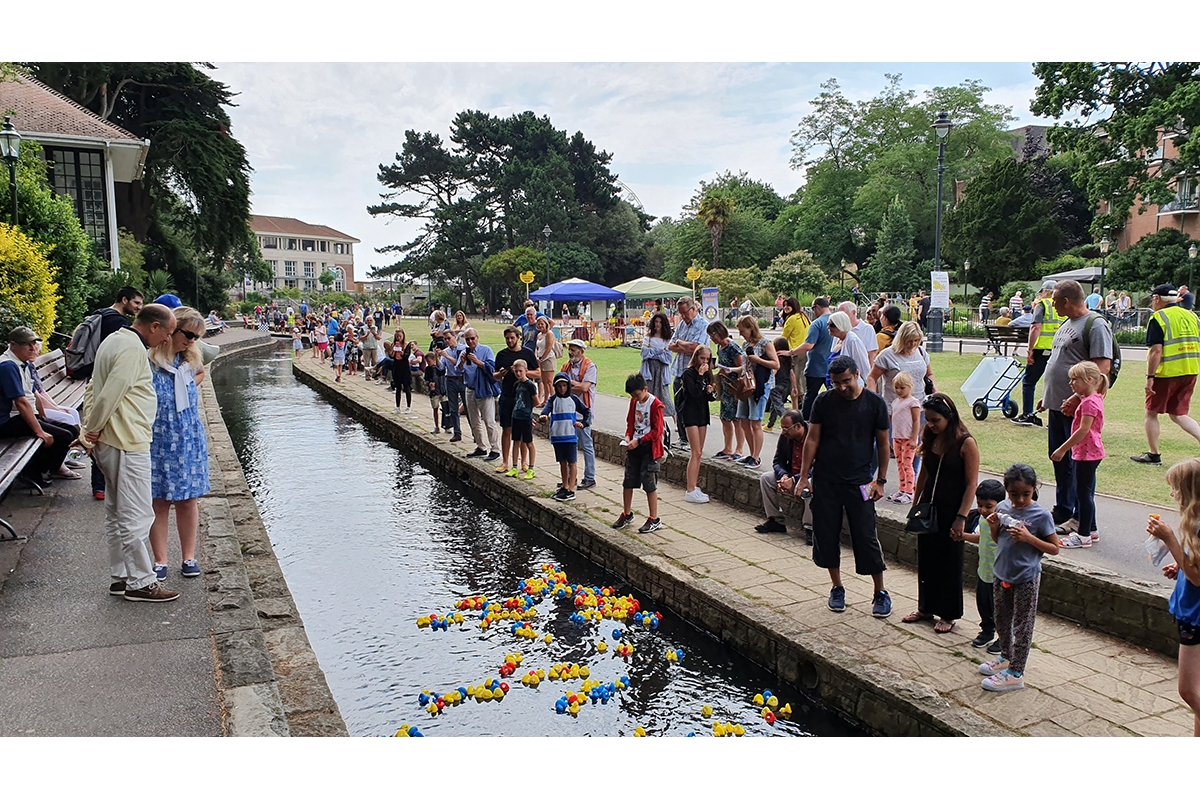 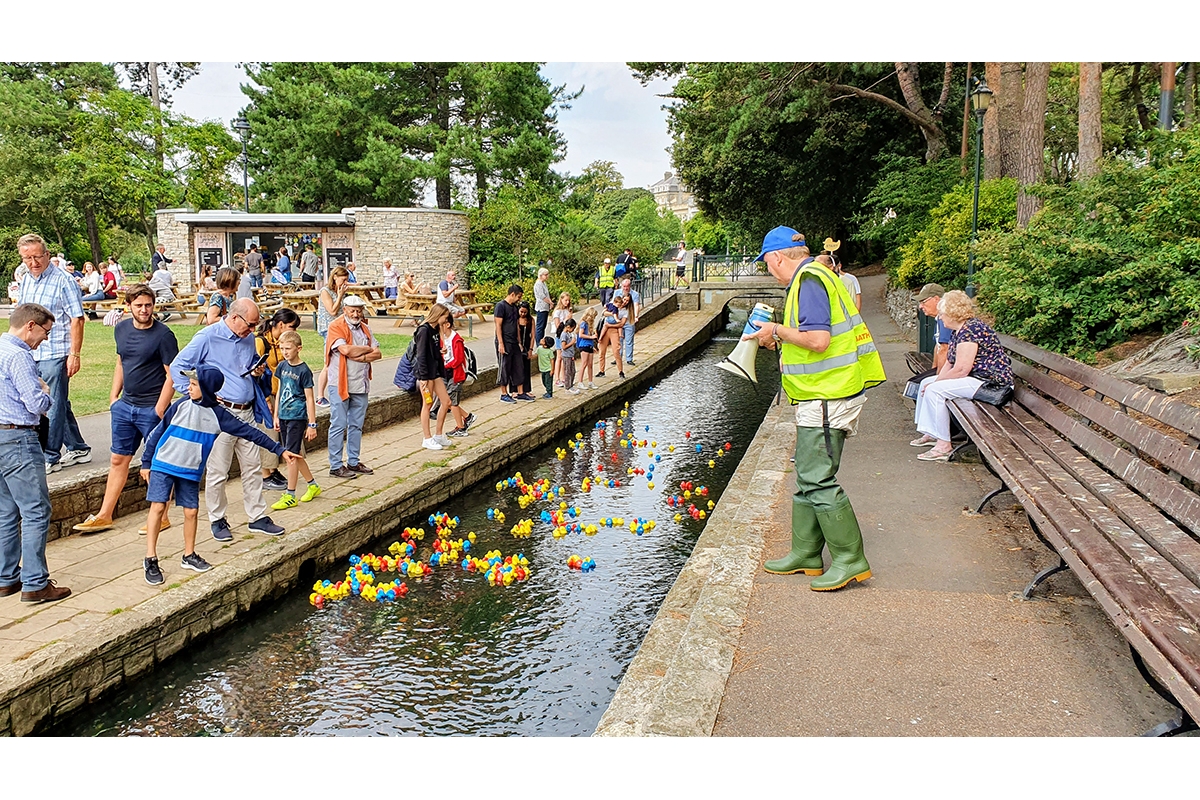 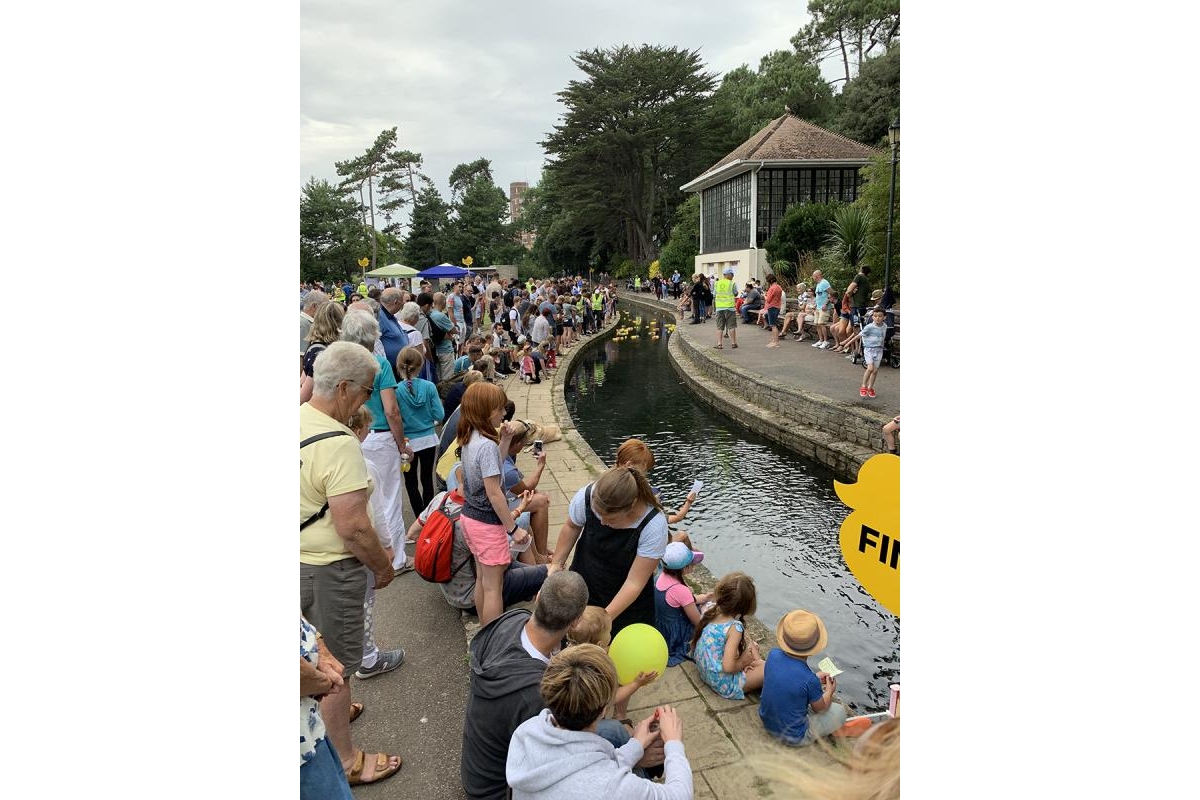 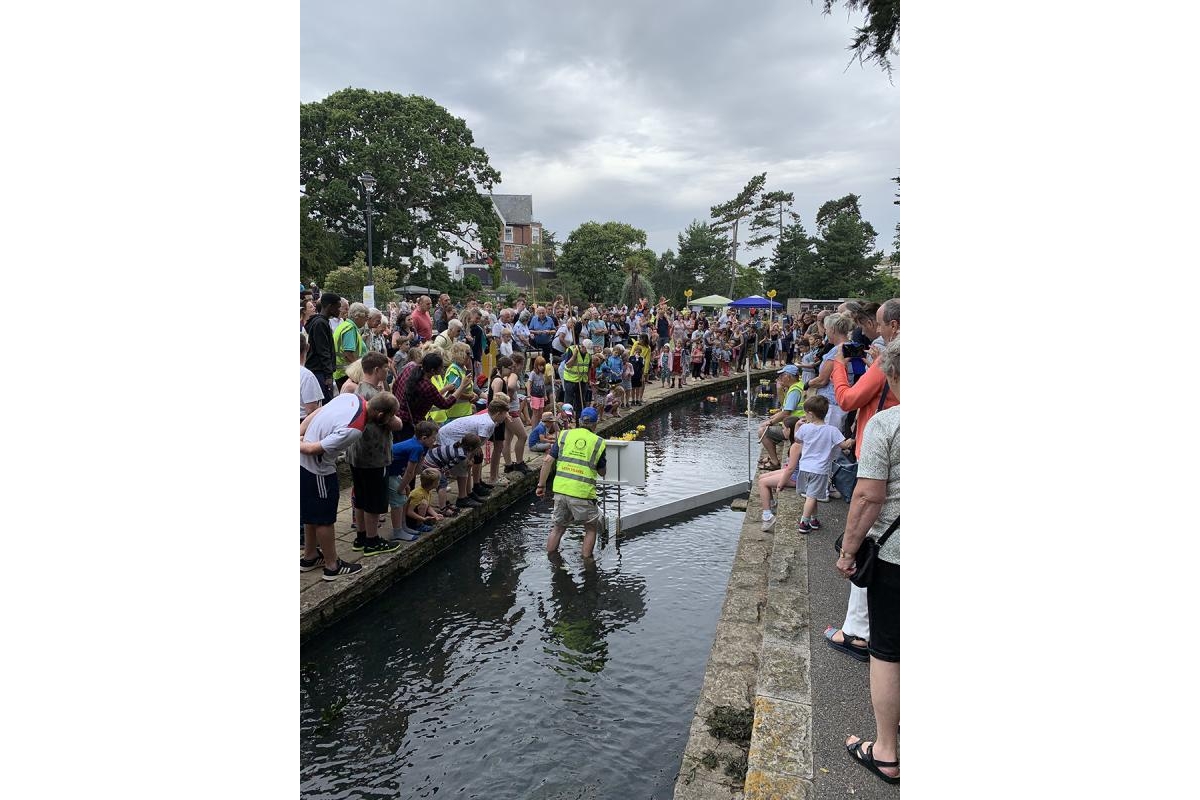 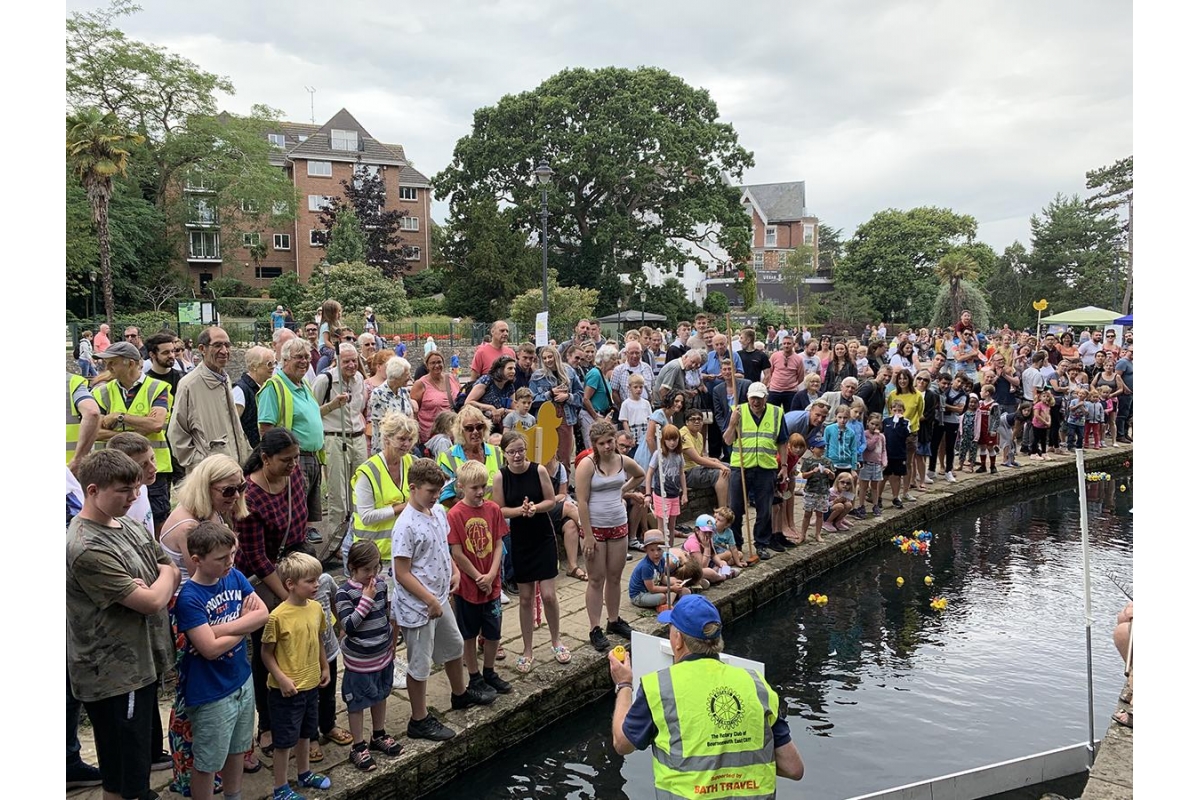 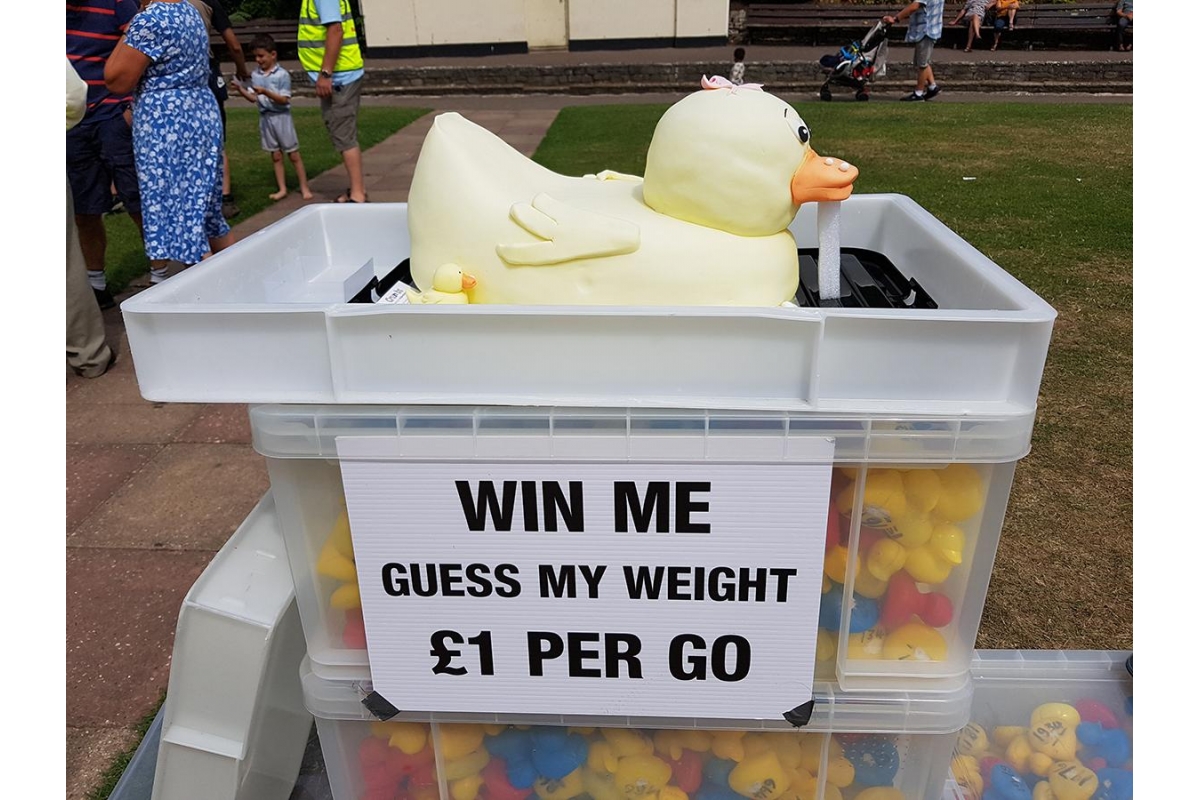 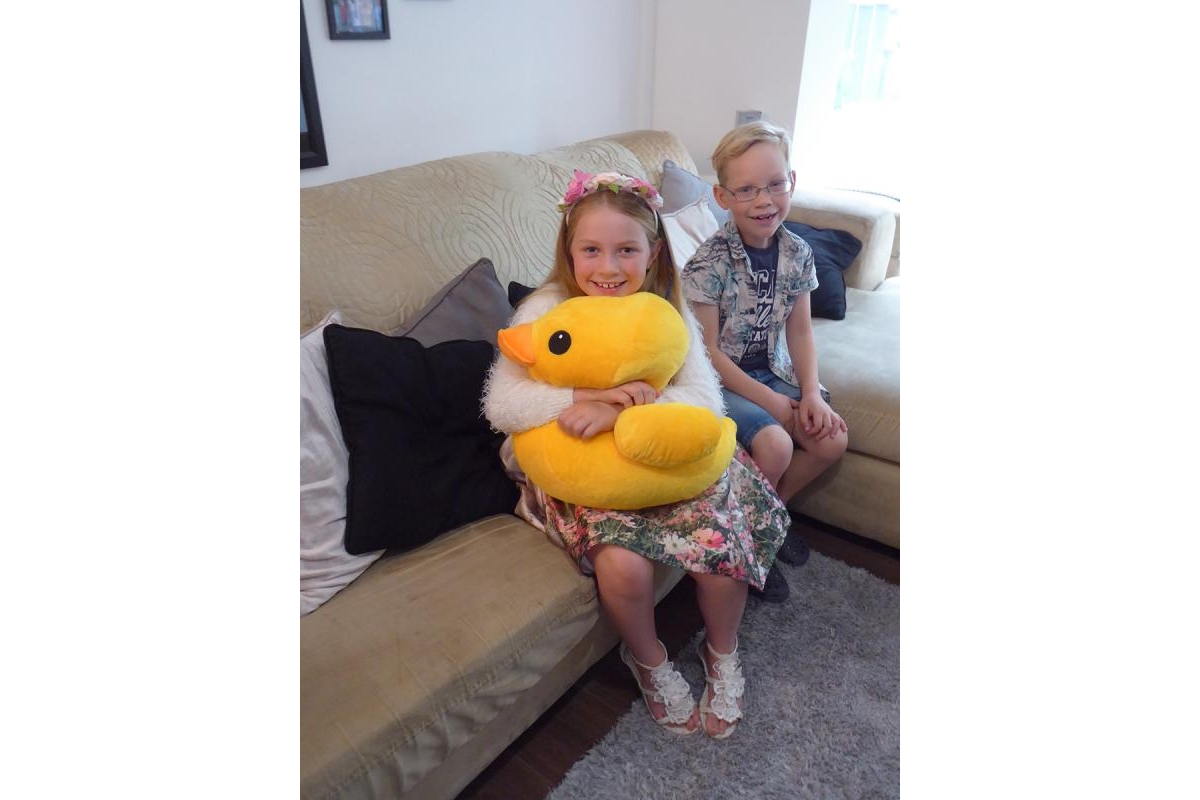 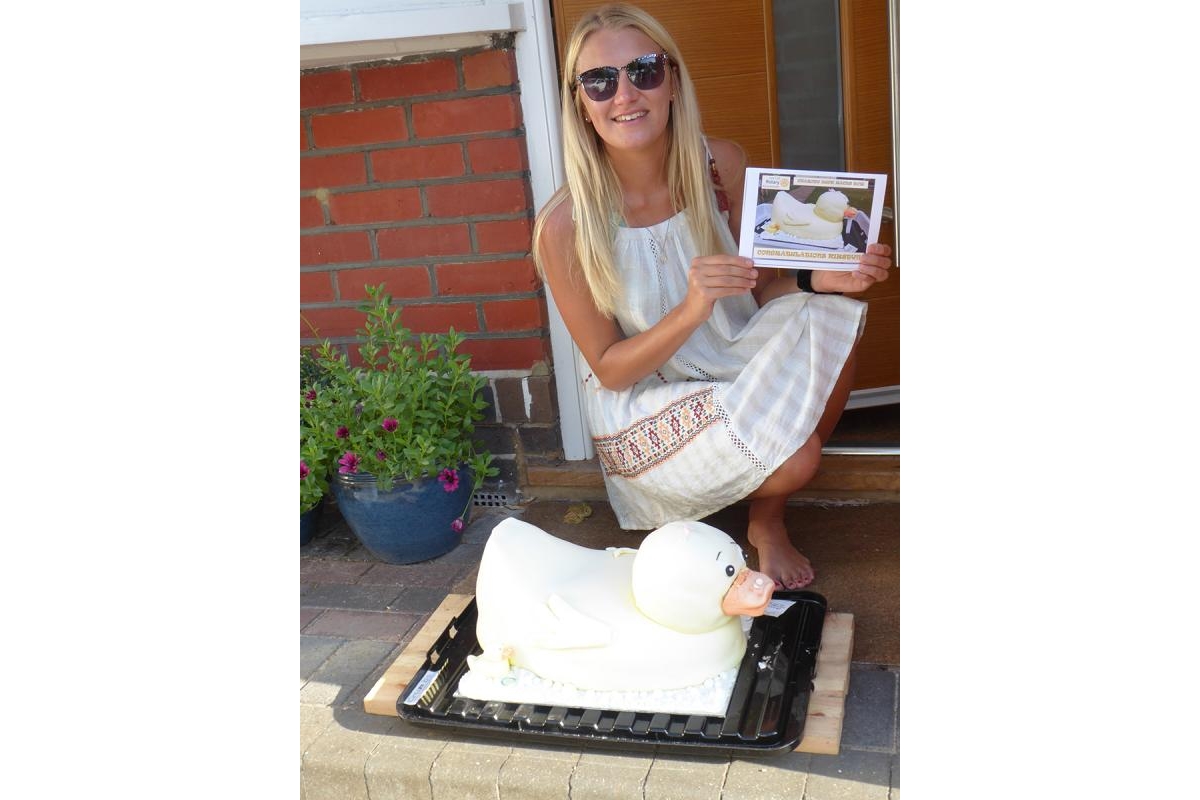 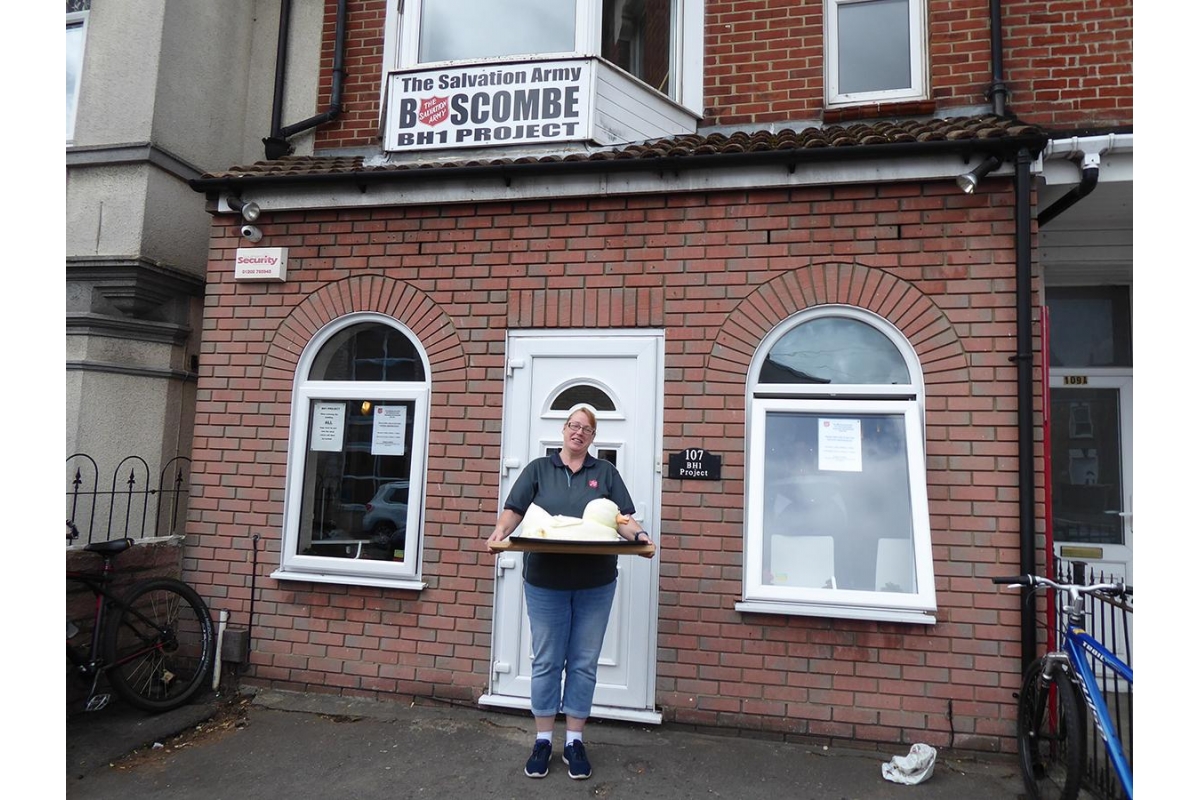 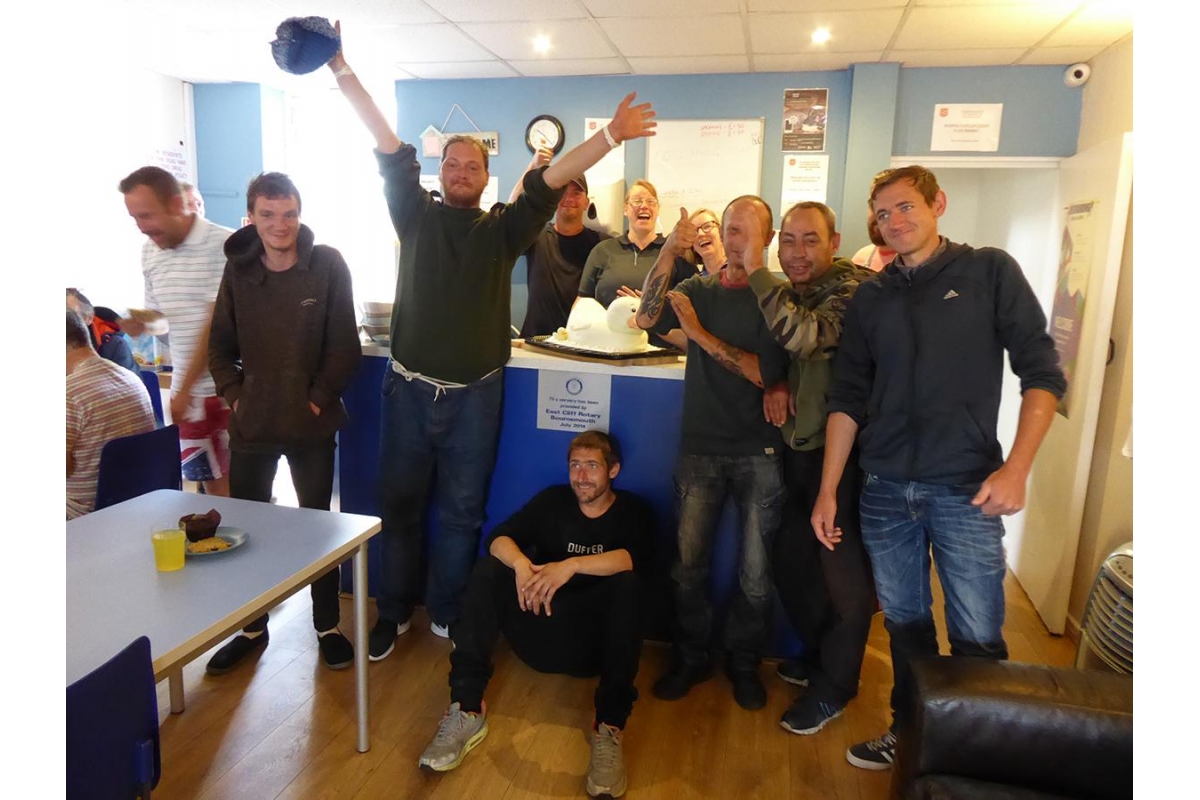 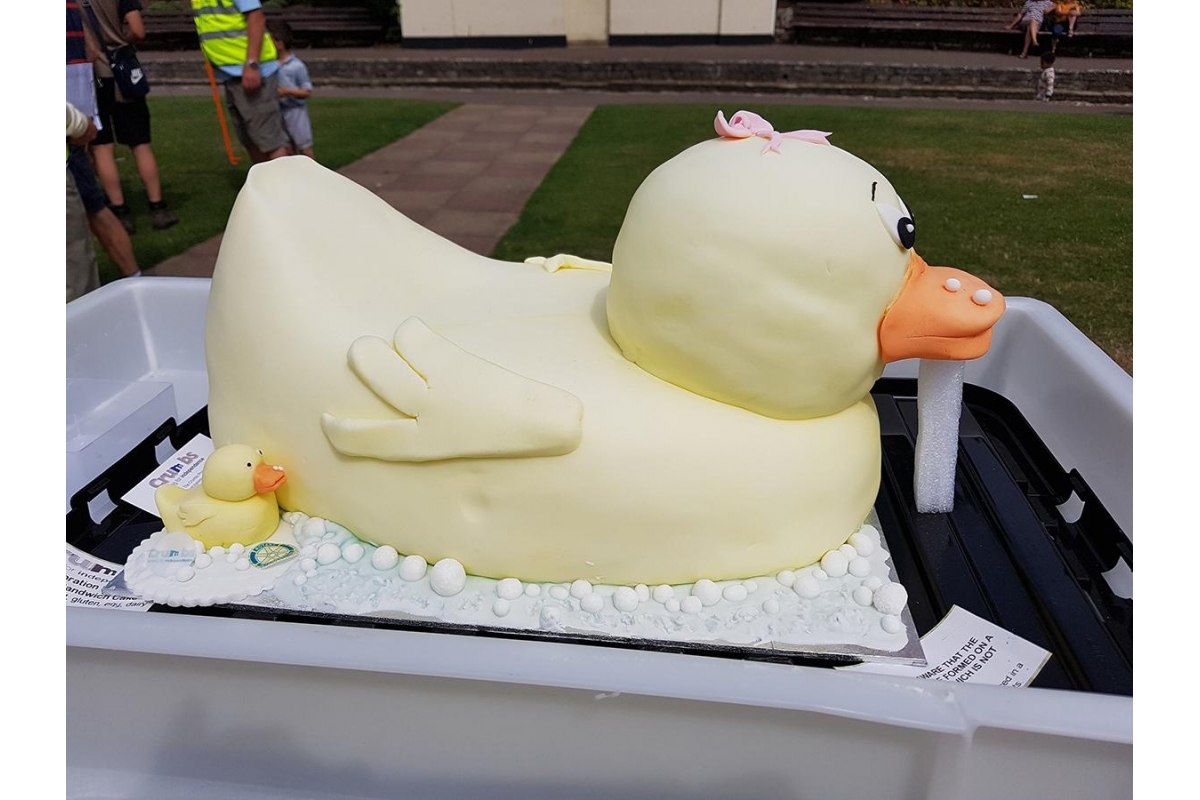 WHO LET THE DUCKS OUT?

2000 plastic ducks battled for supremacy at the Annual Charity Duck Race Mania held in Bournemouth Lower Gardens over the weekend 2, 3 and 4 August 2019.  In pride of place and overseeing the battle were Big Fluffy Duck and the Giant Duck Cake on behalf of East Cliff Rotary Bournemouth who were running the event.

In brilliant sunshine, more than 3000 local people and holiday makers came to watch the ducks take the challenge in six races each day.  At £1 for a duck ticket, there were prizes of £25 for each winning duck, £10 for second and £5 for third.

A separate group of 300 ducks ran in each race with all 2000 involved on both days.  Launched into the Bourne Stream from the Garden Deli bridge, the ducks were caught in the maelstrom at the weir but aided to escape by volunteer duck lifeguards.  The ducks were followed by a man with a megaphone giving a running commentary and someone with a hooter encouraging the crowd to cheer the ducks on.  Great fun had by all!!

Several hundred families and their children enjoyed the Hook a Duck game with a prize every time, including 400 cupcakes made and donated by charity Crumbs of Bournemouth.

The Giant Duck Cake (also made and donated by Crumbs of Bournemouth) was won by midwife Kirsty from Southbourne, guessing the weight at 9.85 kilos, the nearest to its actual weight of 10.2 kilos.  She said it was about twice the weight of the biggest baby she’s ever delivered!  Kirsty took a small cash prize and donated the cake to the Boscombe Salvation Army BH1 Homeless Project.

8-year-old Amilly from Bournemouth was delighted to win the Big Fluffy Duck competition.  She guessed the name “Cuddleduck”, the nearest to Fluffy Duck’s secret name of “Crispy”.  (Seen here with her brother Billy)

The East Cliff Rotary Bournemouth 2019 Charity Duck Races raised £2,003 which will be shared between Crumbs Bournemouth, Bournemouth Dementia Cafes, Prostate Cancer Research Centre and other Rotary charities.  One of the organisers said:

“This is what Rotary is all about, bringing the community together, having some fun and helping those less fortunate.  We are extremely grateful to everybody who took part, especially the families and other holiday makers who supported us.  Also, thanks to several sponsors and those winners who donated their winnings back to our charities.  BCP Council were very helpful in allowing us to use the location and plans are now being made for an even more spectacular Duck Race Mania in 2020.  Watch this space!!”