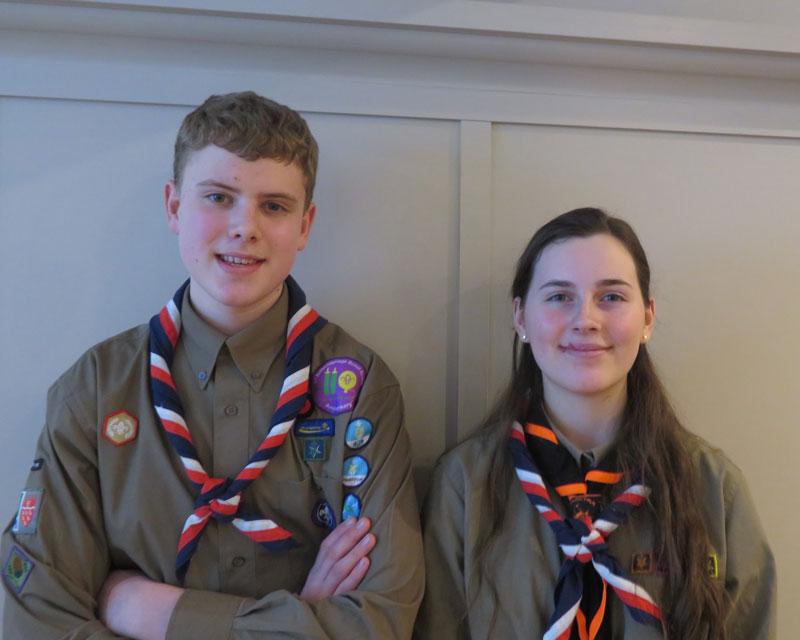 Two Explorer Scouts from the East Sussex EuroJam Contingent who are preparing to take part in the Scouts’ European Jamboree in Poland this summer were the club’s guests on Wednesday 26th February. Rosie Hyland of Selmeston who is home-educated and Thomas Pearson of Etchingham who attends Skinners School in Tunbridge Wells, both aged 14, were accompanied by their mothers and Mike Bett, the East Sussex Contingent Leader.

Rosie and Tom, who were helpers at the Classic Car Show last year, were with the Scout Group which came to the Presentation Evening and received a donation from the club towards EuroJam. At the dinner they were invited to take part in the course and they duly attended at the Bowles Centre in Tunbridge Wells last October along with 15 others from the District. They both said that they had learned a lot about different types of leadership through the activities they undertook, both as leader and part of a team. They did a bog crossing attempting to cross from one side to the other without falling in, a low rope challenge taking a cup of water along the course without spillage, a hoop game which inspired trust in others and the Devil Stick, “A pretty hard task” said Tom. They also learned a lot about Rotary and had to create a presentation about Rotary Foundation while other groups learned about End Polio Now, Interact and ShelterBox. They both said how impressed they were with Rotary and what it achieves. Rosie summed it up, “Over the weekend we gained confidence, teamwork and charitable skills and built up our inner strength and empathy.” But they also both felt that they had learned their own type of leadership style, Rosie was the Autocratic Leader, always in full control of her team, while Tom was at the other end, the Laissez-Faire Leader, hands off and let the team do what they want and make the decisions. “I must work on that,” concluded Tom.