7.00 pm Walk in Kilsby to view history boards and the yarn bombing

John is trying to arrange a pub meal afterwards but it is difficult because we don't know whether more than six of us will be able to mix together until after the June 14th review.


On Monday 28th June, to give us a break from Zoom meetings, John is planning a gentle walk around Kilsby village. We will see the newly installed history boards and also view the displays of the village yarn bombing campaign, if you don't what that is he will explain on the night. Those wishing to walk should meet at 7.00 pm in the car park of the Red Lion pub on Main Road (CV23 8XP). We should be able to have some food after whilst complying with COVID regulations. The Red Lion does not serve food on Mondays but pizza will be available from a mobile pizza oven which will be in the pub car park. We will eat and drink outside at reserved tables, there are umbrellas. A menu for the Vintage Pizza Box is attached. Please make your selection and let me know. I cannot manage a whole pizza so if you only want a half, then please tell me and I will try and match them up if possible. For those not wanting to walk the food will be at 8.00 pm. Because the pub need to know numbers well in advance and I need to pre-order the pizzas would you please let me know by Friday if you will be attending and eating. Partners are welcome provided the numbers remain below 30. Look forward to seeing you in person on the night.

Kilsby is a village and civil parish in the Daventry district of Northamptonshire, England, situated approximately five miles south-east of Rugby and six miles north of Daventry. The village has a population of 1,221 (2001 census). It gives its name to the Kilsby Tunnel on the West Coast Main Line. The tunnel measures 2400 yards (2,216m) in length, and was designed and constructed by Robert Stephenson, son of the famous George Stephenson who invented the early steam-engine "The Rocket". Contrary to popular opinion, the 'George Hotel' in Kilsby was not named after George Stephenson but after King George III - because the hotel lies on the route of the old eighteenth-century turnpike road from Daventry to Lutterworth, and the Act of Parliament that was passed in order to create the turnpike road was signed by King George (in fact, any pub that you may find called 'The George' is almost certainly located beside a former turnpike road). The village's other hostelry is 'The Red Lion', located on the picturesque western edge of the village, at the junction of two former medieval drove-routes. As for its more ancient history, the village was probably founded in about 900-920AD - the giveaway is in the name 'Kilsby', which probably comes from the Anglo-Saxon word cildes and the Old Norse word býr, literally meaning 'child's dwelling' (though 'child' in this context probably means 'young chieftain'). Kilsby's church, now dedicated to St Faith but with an earlier dedication to St Andrew (c15th/c16th) and perhaps an even earlier one to St Denys (c12th), was originally the daughter chapel of the neighbouring parish of Barby, and the two villages still share a priest to this day. Apart from its railway history, Kilsby has a great deal of historical interest - as the birthplace of Sir William de Kildesby (Keeper of the Privy Seal and the Great Seal of England, and a close adviser to King Edward III), as a hotbed of leading-edge Puritanism in the late 1500s and early 1600s, as the scene of a skirmish in 1642 that may have witnessed the first shots fired in the Civil War, and as the location of one of the very earliest Independent Chapels in Northamptonshire. During the late 1600s and 1700s Kilsby was known for its many weavers - but when the village-weaving industry was rendered obsolete by the new factories of the Industrial Revolution there were many in Kilsby who starved to death. Many former weavers turned to boot-making in order to find a living, and in the 1800s many cottages in Kilsby would have included a boot-maker's work-shed tacked on behind. Kilsby today, though it has become a modern commuter community, still retains some of what once made it one of Northampton's most beautiful villages - there are many fine old houses of mellow local stone, each one with a fascinating history.Incidentally, one of Kilsby's more unusual claims to fame is that the A361 road terminates there at a junction with the A5 road. The A361 runs to Ilfracombe in Devon, making it the longest '3-digit' road in Britain.

This page will provide some examples of what RCODD do during the year. 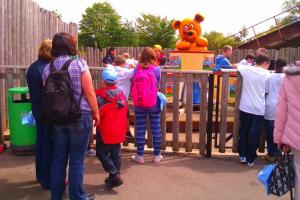 The Rotary Club of Danetre Daventry is proud to focus on the Youth of Daventry this page shows the range of events we have arranged.

This area of the web site outlines all the local activities that Danetre Rotary Club are involved with.

Rotary is an International organisation and there are several initiatives that Danetre support. Details of these can be found here. 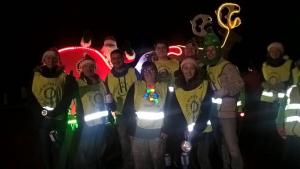 Rotary Members do things other than spend time at Rotary. Go to this page to see examples. 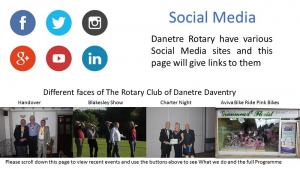 The purpose of this area of the site is to provide information to potential members.

This page contain the policies that club signs up to