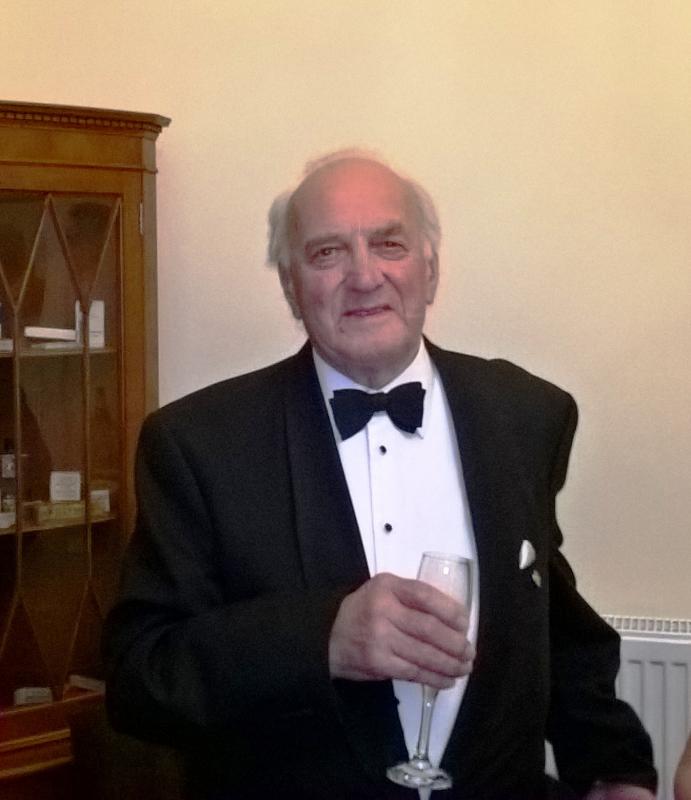 Bruce’s first Pharmacy was in Victoria Road, Guiseley before eventually moving to Otley Road  until his retirement when the shop was sold to Boots. An early eventualbonus to Rotary  members was his production of a fantastic Rawdon Cough Mixture to his own recipe. Over the same period his wife Angela was running her Gifts and Cards shop in Ilkley

Bruce joined the Rotary Club of Aireborough for the first time in the early eighties around the same time as Roy Copley, David Nerurkar and Barrie Oldam before moving to Bingley Airedale, an evening Club, because of pressure of work. He rejoined Aireborough in April 1996 and feeling he had missed out on the Presidency put himself forward for the 2006/7 year. Imaginatively for his handover he took us to Yorkshire Lavender in East Yorkshire .

His birthday was the same as Brian Waite’s, 15 November, though he was one year older. As their birthdays approached he delighted in mentioning 'his younger twin'. He served on and contributed to the Club’s International Committee. He was ever supportive but always prepared to rein in members ready to overspend on budgets or debate the merits of a cause.

In meetings his humour was dry and carefully enunciated. He loved to seek clarification from speakers on some point they had mentioned, normally wittily. In meetings he always came up with something good to talk about, ready to join in wherever and whenever he could. Such diverse topics might include business rental situations or controlled drugs and their registers

He had a family tradition of taking children and grand children to a Boxing Day pantomime in Harrogate, booking early to ensure taking up the whole of the front row.

He was also a regular attender with Angela at Scarborough Rotary Conferences where the photo was taken. Aireborough Rotary’s greatest Conference Fancy Dress moment as winners stemmed from the Hammonds’ idea of appearing as 101 Dalmatians. The trophy remains in the Club’s possession.

He organised two e-bay auctions with Angela, the first for Inner Wheel which he always supported. They did everything including acting as the base on the day taking pictures of lots and packaging and posting items sold. People remember Gerald Long becoming very animated in front of the screen as bids came in, especially for a Leeds United European Cup Winners’ Cup programme donated by Bill Hudson selling eventually for £240.

A fan of Big Bands his contributions to the Annual Band Concert programme included sponsoring pages in the programme for Angela's art. Who will forget her brilliant card with Bruce as a gruffly friendly Father Christmas?

At the recent Quiz Night in January team mate Sally Mohan found him very knowledgeable with a quirky sense of humour and with an interesting story behind some of his answers.

Barry Bootland had the great pleasure of being ferried back and forth to meetings in Bruce's pride and joy - his classic car a Jowett, made in Bradford.

One of his job talk reminiscences included a story about a mother scolding her child for telling tales after seeing Bruce, in a quiet moment, washing a rabbit under the tap in the backroom of his pharmacy. This was a toy rabbit left in the shop which had become rather dirty!

Current Rotary District Governor Manoj Joshi wrote ‘I am shocked to receive the distressing news of Rotarian Bruce Hammond’s untimely death. Please convey my condolences to President Janet Appleton and Club members as I do share in their grief and mourn the loss of a thorough gentleman and a compassionate Rotarian’.

Bruce and Angela had difficulty in being able to leave a cruise ship early, not succeeding until docking in Cuba. On returning home Angela went into hospital with COVID-19, recovered and came home. Bruce followed her into hospital, was able to be visited by a now immune Angela but did not survive. He will be very sadly missed by us all.