What is Antiphospholipid syndrome (APS)?

A Round Britain Rail Tour to raise awareness for APS 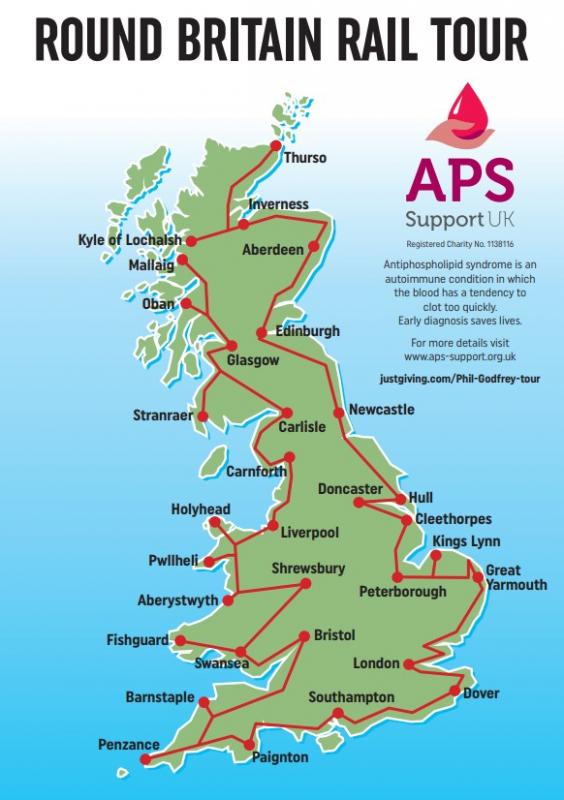 Rotarian Phil Godfrey (Solihull Rotary Club) and his wife Christine enjoyed 42 happy years of marriage and spent many walking holidays in the British Isles and Austria. Christine was a very active lady and enjoyed playing tennis and badminton. Sadly, she died in 2015 after being diagnosed with Antiphospholipid syndrome (APS).

APS is a very little-known condition. It was not discovered until 1970 and even today 37% of GP’s know nothing about it. It is an autoimmune condition in which there is an increased tendency for the blood to clot. The condition can cause strokes, heart attacks, pulmonary emboli and DVTs. In pregnancy, APS is a leading cause of recurrent miscarriage and stillbirth. .

The exact cause is not known and like many autoimmune diseases it is more common in women than men. Early diagnosis is critical. The diagnostic criteria require one clinical event (i.e. thrombosis or pregnancy complication) and two positive blood test results spaced at least three months apart that detect certain antibodies. .

The first sign that there was something wrong with Christine Godfrey was in 1995 when she developed a dropped foot. But unfortunately another 10 years passed before she was finally diagnosed with APS. Her fingers curled and she gradually lost the use of all 4 limbs before she passed away in 2015. .

In view of the devastating effect that this condition had on his wife Phil decided he wanted to raise awareness of APS and raise funds for its research by embarking on an epic 1,400-mile walk from the Scilly Isles to the Shetlands. Unfortunately, on reaching Devon, he tore a muscle and had to return home. .

Determined to start again, he went back to the Scilly Isles a few months later. This time he reached Preston in Lancashire before severe pain in his knee forced him to give up any idea of tackling the remaining 1,000 miles. Following surgery on his knee he was told he must forget any idea of long-distance walking. .

Not to be defeated, Phil came up with a new plan and in 2018 set off on a Round Britain Rail Tour as near to the coastline as possible. He did it in stages during 2018/19 and completed his objective just 4 months before the first Covid-19 lockdown. .