At Abbey Mill, Tintern, on the afternoon of 29 June 2021, Richard WICKHAM of The Laburnums, Woolaston, was inducted as the new President of the Chepstow and District Rotary Club having served as the Senior Vice President for the previous year.  Richard practiced as a vet in Canterbury while his wife, Anne, served as a medical practitioner.  They were both long standing and active members of Rotary where Richard twice served as President with that club.   On retirement the couple moved to Woolaston where they were eager to re-join Rotary as a route to friendship and service to the community.

Richard thanked his predecessor, Geoff SUMNER, for his efforts during the past year as President.  That had been a most challenging time when the majority of club meetings had to be held on ZOOM.  However, the club had still enjoyed weekly on-line events including all business meetings, speaker evenings and even a pantomime, together with a monthly newsletter.

Richard accepted the responsibility of President with enthusiasm and set out the aims and objects of his Presidential year.  He plans to follow the four “F’s” – fun, fellowship, fund raising and finding new members.  He had generated a full programme of meetings, events and activities to ensure that fun and fellowship remain at the top of the agenda.  At the monthly ladies’ evenings at the St Pierre Hotel speakers have been specially selected to be of interest to the ladies.  He stated that in spite of the cancellation of the Chepstow Show with its Rotary Stand Tombola the other key fundraising events of the December Tintern Torchlight Carol Service and The 2022 Wye Run for classic cars would continue with full support.

The last of the four “F’s” was undoubtedly the most difficult issue to be addressed and Richard appealed to all members to leave no stone unturned in addressing this problem of new members.  He reminded everyone that the Club is well defined on www.chepstowrotary.org.uk where anyone interested may read of past and future events and obtain more information.  He stressed that all remain welcome.  He encouraged any Rotarian who had a potential new member in the form of a friend, relation or neighbour, to bring them and their partner to one of the meetings or social events where they would immediately recognise the enjoyment and satisfaction inherent in Rotary.

Richard spoke of the overall cost of membership that might be of concern to potential new members.  With that in mind, he had tried to ensure that during this coming year all the meetings, events and activities would be affordable and above all good value for money.

He then inducted Paul DURANT as the incoming Senior Vice President and Jan KONING as the Junior Vice President.  Finally, he reminded members that The Chepstow and District Rotary Club is a small, friendly Club with a big heart that punches well above its weight on many occasions.  He looked forward to serving the Club as President once again to the very best of his ability after which the members were upstanding for a toast to Rotary and The Chepstow & District Club.

The programme planned for our coming Rotary year.

Being a member of Rotary is not just about service! 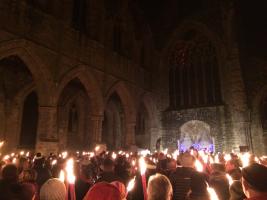 This Torchlight Carol Service is a very special local event that launches the Chepstow Christmas Season.