The Club met on a field belonging to Rotarian John Perry for the Presidential Handover this year because of the coronavirus pandemic. 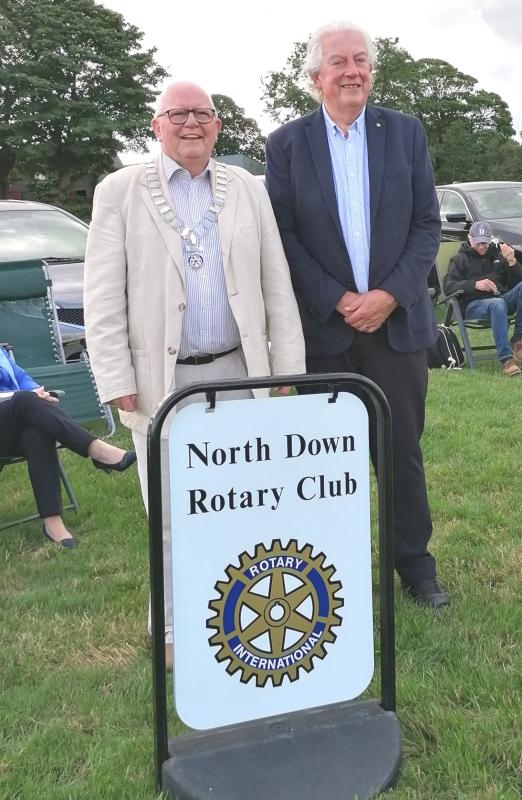 Due to Covid -19 restrictions placed on meetings held indoors, the Rotary Club of North Down took up a suggestion made by club member, Rotarian John Perry. His suggestion was, to enjoy the use of a field adjacent to his farmhouse for an open-air meeting, to enable club members and their partners to come together to mark the occasion and to witness the handover from President Greg McCourt to incoming President Mike McNeice. Council had also agreed to bestow a special presentation upon Rotarian John Ritchie and his wife, Carole, to honour their long service and commitment to the club - John to become an Honorary Member and a Culloden Hotel & Spa voucher for Carole. Members were encouraged to watch the weather forecast and dress appropriately and to bring their own food, drinks and chairs/tables.

Rotarian John Perry and his wife, Pauline had prepared the field, suitably marked out with fencing to respect distancing requirements, and gone to the bother of providing toilet facilities, with both the entrance to the field and toilets all clearly marked. John was on hand to greet Rotarians on their arrival.

President Greg used a megaphone to call the meeting to order. For some strange reason, it kept blaring out the football song, “Ole, Ole” at various unexpected intervals, much to everybody’s amusement! Greg gave a short resume of his Presidential year and thanked the convenors and commitees for their hard work and everything they had achieved during the year, with many charitable donations being handed out to various worthy recipients. He also thanked club members and partners for their unfailing support of him during the past year, which had ended in a strange and uncertain manner with club in Lockdown. He was particularly grateful to everybody for their attendance and support for the Presidential Handover.

Thanks were expressed to:

Rotarian John Perry and his committee in Environment and Vocational issues, collecting bikes for Africa/cleaning up part of the coastal path and tree-planting in Crawfordsburn Country Park.

Rotarian Barry Patterson and committee for organising a wide range of entertainment such as the annual dinner/ Echlinville Distillery visit and Christmas party.

Rotarian Steve Blayney and committee for a successful International night (when we were pleased to welcome Kevin O’Hara, Assistant Governor, to join us) and initiating the Lend-with-care scheme.

President Greg expressed regrets that Rotarian Maureen Thatcher did not have the opportunity to put her and her Youth Activities committee’s hard work for the Young musician competition into practice, due to Lockdown.

Rotarian Alan Cook and committee were thanked for organising a successful film night and for all other work contributing towards fund-raising for Foundation and Polio.

All Council members were thanked for their commitment to meetings and particularly those which have been conducted recently via Zoom.

The President also thanked Rotarian Donald Kerr for meticulous account-keeping in his role as club treasurer and Rotarian Judy English in her role as secretary.

The Chain of Office was then passed on to Mike McNeice by Greg.

New President Mike expressed thanks to Immediate Past President Greg for all the guidance which he had given to NDRC during the 2019/20 season and also thanked those present and said that he too appreciated their support. He gave his personal thanks to Greg for his advice, support and friendship. He commented that when he had joined RCND some five years ago, he had been made to feel most welcome and was struck by the friendliness of members. He re-iterated the comments made by Greg regarding the accomplishments achieved during the last Rotary year. He expressed the wish to continue to work in a similar vein for the incoming Rotary year and announced his desire to have a particular focus on mental health during his presidential year. Rotarian Terry Cromey has already done some research into this.

He thanked those Convenors who had already indicated their intentions to carry on in their posts and those who are taking on new posts within Club. Some committees have yet to be assigned to members. He said that he realises that the next year will be a challenge, but knows that we will all rise to it together, given the wisdom, talent and life experiences present amongst our members.

The new President had attended a Zoom District Council meeting at the weekend where the new 2021 mantra was “Rotary Opens Opportunities.”

President Mike’s first official job was to present Rotarian John and Carole Ritchie with an Honorary Member badge for John and voucher for Carole.

Rotarian John and Pauline Perry were heartily thanked by all present for their thoughtfulness in thinking of this way to mark Presidents’ handover and their hospitality providing the venue.

As the business affairs of the evening were over, members enjoyed some “socially-distanced” refreshments and there were a lot of “catching-up” conversations to be had, two metres apart!!