A talk by Richard Robson 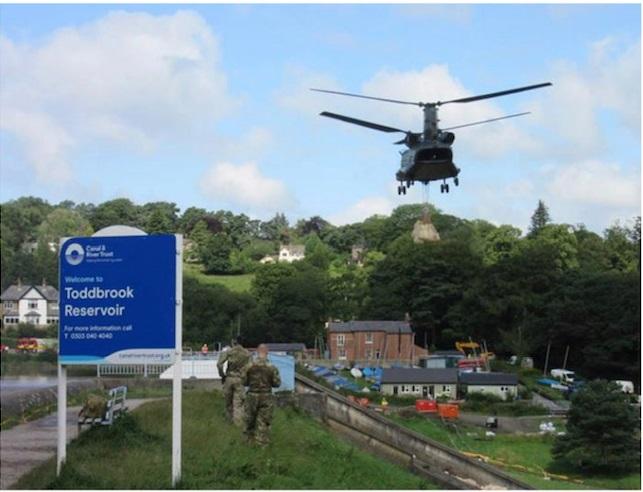 How engineers scrambled to save Toddbrook reservoir dam

When water began overtopping the Toddbrook reservoir dam and cascading down its concrete spillway, the worst was not only feared but appeared to be a likelihood.

The Environment Agency issued a warning to Whaley Bridge residents that there was an “immediate threat to life”, Derbyshire Constabulary police service began evacuating thousands of people from their homes and engineers arrived on scene desperate to prevent the dam from catastrophically collapsing.

Such scenes had not been seen in the UK for more than a decade. The incident is the first major threat to a dam's stability in the UK since the Ulley dam suffered severe scour amid the floods of 2007. The last time anyone died due to a dam failure in the UK was in 1925, when two dams burst, killing 16 people in the north Wales village of Dolgarrog.

Concerns for the Toddbrook reservoir dam were raised on the morning of Thursday 1 August as the reservoir reached capacity and water began tumbling down the concrete apron wall of the clay core embankment dam’s auxiliary spillway.

At 12.30PM the Canal & River Trust had alerted its dam maintenance contractor Kier that there may be an issue. Just 25 minutes later, the reservoir’s draw down plan had been activated after water overtopping the dam triggered the collapse a 1.29M.m³ section of the reservoir's concrete spillway.

By 2.15PM dozens of engineers were on site, not to mention more than 100 service personnel and a full scale rescue mission was in full swing to save the 188-year-old dam. 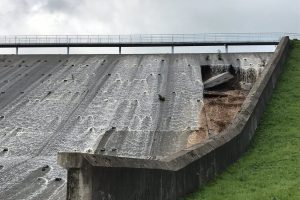 And with more rainfall forecast in the coming days, the rescue effort became a race against time and nature.

Speaking to New Civil Engineer from the scene during those crucial hours on 1 August, Canal & River Trust principal reservoir engineer David Brown admitted that “there [was] a very real chance that the dam could fail”. Brown was dragged away from the phone by a fire officer who needed instructions on what work to prioritise, yet despite the frantic scenes around him Brown remained confident that the dam could be saved.

“Unless we are very unlucky I think we should be able to save it,” Brown quipped before being whisked back to the rescue mission.

That same optimism was shared by All Reservoirs Panel member Richard Robson who was in his car en route to the scene when he told New Civil Engineer that “everything would be done to save the dam”.

Back at the scene Kier regional civils director Eddie Quinn had begun mobilising the draw down plan.

Contracted by the Canal & River Trust, Kier was in charge of getting the water level down as quickly as possible as well as assisting in the repair job to the concrete spillway.

Quinn received first noticed of the incident as 12.30. Just two hours later and 55 Kier engineers were on site and hard at work.

“At first there was a lot of panic,” Quinn said. “There were so many people arriving on site, the fire brigade was there, police, the Canal & River Trust, All Reservoir Panel engineers and so on. It had stopped raining but the sky was black and we all feared the worse.”

Kier maintains the Canal & River Trust’s 72 reservoirs and for each one regularly practices its draw down plan. However, despite having a plan in place, Quinn admits that it is almost impossible to prepare for such a dramatic incident.

Quinn added: “We have a draw down plan in place and we regularly practice at the different sites, so we knew what to do, where to get the pumps and how to get the water out.

“That said, practices are very different from an emergency situation. We don’t usually practice evacuating the town.

“We would normally have weeks or months to get the water level down, not hours and days.”

He added: “The situation at Whaley Bridge was tense and at sometimes dangerous, however everyone pulled together and I think we, as an industry, can be very proud of the final outcome. So while it was a panic, it was an organised panic.”

On Thursday evening, Kier engineers broke three weirs, as well as installing numerous temporary roads and access points, including a new road which ran from one side of the reservoir, allowing water pumps to be installed and maintained.

By Friday morning, thousands of residents were waking up having spent the night in a local school in neighbouring Chapel-en-le-Frith. Engineers had worked around the clock, pumping out 105,000m3 of water in 12 hours. However, the target level of reducing the reservoir to 25% capacity was still a way off and while the deluge of rain had subsided, the Met Office had issued a yellow warning for more floods in the days ahead.

As New Civil Engineer arrived on the scene, an RAF Chinook had begun dropping hundreds of one tonne bags of aggregate into the void in the spillway’s concrete apron wall. In total the RAF team dropped more than 1,000 sandbags and 600 bags of aggregate to plug the hole.

Public transport into and out of the town had also been completely suspended or rerouted with all trains passing through the town cancelled, including trains running between Sheffield and Manchester Piccadilly.

The Derbyshire Constabulary were also out in force, with roadblocks set up across major roads in the valley to prevent anyone re-entering the deserted town.

Transport was further disrupted as the A6 was shut down to become a holding point for 600t of aggregate that was being flown to the reservoir by the RAF Chinook helicopter. The closure pushed heavy goods vehicles into the local roads, bound for the troubled Toddbrook reservoir carrying everything from engineers to heavy plant, material and water pumps.

After six nights camped in a school hall – and following visits from prime minister Boris Johnson and Labour leader Jeremy Corbyn – residents were finally given some good news. At 11.30AM on Wednesday 7 August the Canal & River Trust announced that the reservoir had been sufficiently drained to the target level, eliminating the risk to life. 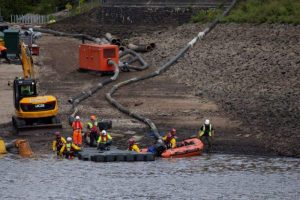 Two hours later, the decision was taken to allow residents to return home. As they did so, the signs of the rescue mission were there to see with crates of sandbags lining the usually picturesque cobbled streets.

In the days after the majority of pumps were dismantled with a skeleton crew left on site to assess the damage to the spillway, applying more grout between the bags of aggregate to ensure it remains watertight.

Investigations will now be launched to determine exactly what triggered the partial collapse and questions will be asked of the robustness of the country’s dam inspections.

However, HR Wallingford technical director for dams & reservoirs Craig Goff – who also sits on the Supervising Engineers Panel, set up to advise dam owners on the safety of their dams at all times – believes that the UK already has one of the most stringent sets of dam inspection protocols in the world.

Reservoirs over 25,000m³ in England and Wales are today subject to stringent checks and reservoir panel engineers are some of the most skilled and revered civil engineers in the industry. Such reservoirs undergo inspections at least every 10 years by skilled panel experts who set out safety measures to be undertaken within set time limits and subsequently certify that those works have been satisfactorily carried out. With a capacity of 1,288,000 m³, the Toddbrook reservoir is subject to these inspections and its last 10-year inspection was carried out in November 2018.

“The UK has an extremely stringent system in place for dam inspections,” Goff said. “The 1975 Reservoirs Act is not only seen as best practice in the UK but is also used in places such as Hong Kong and Singapore as it is regarded as being so stringent.”

Goff added that recommendations made during the Flood & Water Management Act in 2010, but yet to be added to the Reservoirs Act, would make the system even more stringent. These include rolling out inspections to dams of smaller capacity and assessing dams on the level of risk posed from a collapse rather than capacity.

Technological advances in dam monitoring are also going to advance dam inspectors ability to spot threats to structures, according to Goff.

“We are entering a really exiting time in terms of dam monitoring,” he said. “There are the advances in space monitoring that we are doing with the UK Space Agency. There are also tools being developed using magnetism to monitor depreciations in dams as well as systems which put electrical currents through the water.

“None of these tools will prevent a collapse on their own, but they will become another part of an inspecting engineer’s arsenal to help identify risks.”

So, while the effort of the Whaley Bridge rescue team is rightly being heralded as a success story for the industry, advances in technology and tweaks to the existing regulations should prevent the UK from having to go through similar nerve-wracking scenes in the future.