For many years the club has organised a Christmas Collection where members are joined by local charities (some of whom have been supported by the Club for many years) on their street walks around Wallington and Carshalton.  Father Christmas comes along each night to wish the residents and especially the children a Merry Christmas.  It is no exaggeration to say that there are lots of families who have grown up with this annual event and great grandparents, grandparents, mums and dads and little ones eagerly await the sound  of Christmas music which heralds his arrival.  It is a privilege to be part of this and every penny raised goes to local charities.  There are also static collections in Carshalton High Street and Sainsburys and as the Christmas celebrations have grown Father Christmas now attends several festive events.  The Easter Egg Hunt in Carshalton Park does not have the longevity of the Christmas Collections but has now become an established part of our annual fundraising calendar and takes part on Good Friday.  There are side stalls,  a catering school run by the local Scouts, and a very popular show has been the magician.  The club is involved in several events held in Beddington Park, the May Fayre and the twice yearly annual clean up.  Both of these commitments bring together members of the community and in the case of the May Fayre charities book a stall to raise money for their coffers.

To engage with local youth our flagship event is the Top of the Form competition open to all schools in the Borough.  This involves teams of 4 from year 6 classes.  It is hoped that when the children grow older they will remember the name Rotary and perhaps become members of clubs themselves.

Other areas of involvement which are not specifically fundraising activities are Carshalton Carnival, support for the Oaks Way Day Centre, Sutton Talking Newspapers, Bramley Hill Rangers and the Darby and Joan Club.

It is a privilege to belong to Rotary and to become involved in supporting the local community.

Responsibilities of this committee in our club.

Carshalton Park EASTER EGG HUNT 10th April 2020 With regret, we announce that as a precaution against Coronavirus community transmission this event IS NOW CANCELLED We ask for your understanding and that you keep safe by following advertised advice. 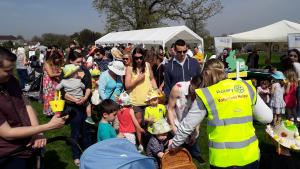 So sorry! We are unable to bring you our Easter Egg Hunt this year. We are looking forward to being able to run events as the COVID situation improves later in 2021. 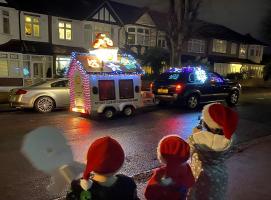 Father Christmas is busy planning to visit his friends at Rotary Club of Carshalton Park this year and the elves have been putting together the route that he will follow... please read on.....

The 2020 Sutton Schools “Top of the Form” competition which we organise is now underway. TOTF is a competition for local primary school children. This quiz is based on the popular radio and later television series first aired during the 1950's and 60's 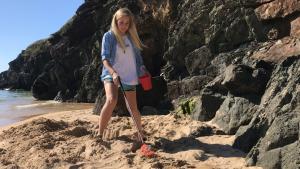 With the threats to the environment becoming more evident, Rotary has made it a new area of focus in order to help reduce the impact we are having on the globe.

Although our recent fundraising activity has been severely curtailed during the Corona virus crisis we have continued to make donations to local charities who have continuing needs at this difficult time.

Our aim is to organize projects and fundraising events that will be of benefit to those people abroad in the greatest need; not only following national disasters but also regional projects and global Rotary initiatives such as Polio Eradication.