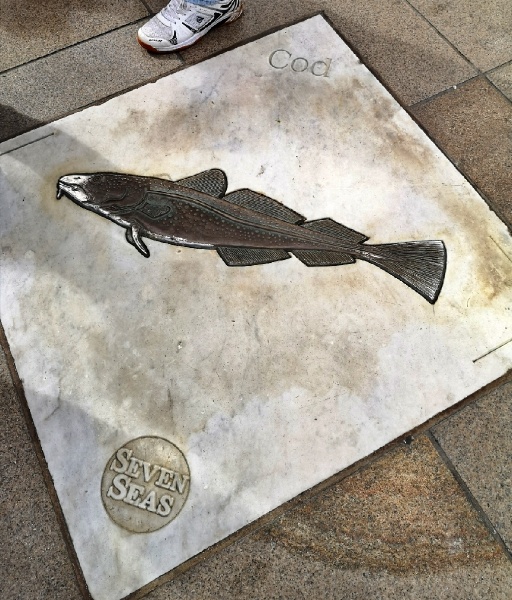 Sixten intrepid travellers set off from Scarborough Railway Station at 10.13am on Sunday, September 15 to walk the Hull Fish Trail.But before the group arrived in the current UK City of Culture tour guide Mike Wilkinson tested them on questions about the Hull dictionary.

For example, what does “Yerolidiz” mean (your holidays)? Or “Fern” obviously your phone or “Arse in yer Kirk”, ice in your coca cola with the Grunwells winning the star prize scoring 17.5 out of 20.

So arriving at Kingston upon Hull after an hour and half train journey we headed to the Philip Larkin statue in Paragon Station for a group photo, where we were joined by Mike`s friends Roy and Gill.

Larkin is the City`s most famous poet and novelist, declining the position of Poet Laureate in 1984 and was the librarian at the University of Hull for 30 years.

We then headed off to Queen Victoria Square to start the trail, which starts outside the City Hall, and is a public art initiative around Hull`s old town following the line of its medieval walls.

Mike began by explaining how the trail had been devised as one of Humberside County Council`s contribution to the 1992 Hull Festival, that commemorated the 350th anniversary of the city`s involvement in the English Civil War in 1642.

The project was managed by the County Council`s Leisure and Tourism Department, which Mike headed and was part of the “Gateway Europe” project - a unique cultural tourism partnership, funded by the Arts Council of England and the English Tourist Board, led by our very own John Munro.

The group then headed off at noon to trace the 41 sculptures, starting with “A” for anchovies outside the City Hall, finishing with “Z” for zander.

The first port of call was Beverley Gate, where in 1642 Sir John Hotham refused Charles I entry to the City – an act of defiance widely acknowledged as the spark that ignited the English Civil War.

The decision to stop the king entering the City was made in the plotting room of the Ye Olde White Harte pub but more about that later on.

The third installation at this point on the trail was “cod” a fish synonymous with the fish and chips dish.

We steadily moved along Princes Dock Street, beside the Prince Dock Shopping Centre and down Posterngate to Trinity Square.

At the square Mike described the history behind the Hull Trinity House charity which founded a school in 1369, which is now academy with the charity known for serving seafarers and their families.

Hull Minster, formerly the Holy Trinity Church – England`s largest parish church – was built using fine medieval brickwork with a 17th-century organ and was a popular staging post for the group on the walk.

Hull Grammar School too in the square was built in 1683 and boasts William Wilberforce and Andrew Marvell as its famous old boys.

Next on the trail was Corporation Pier, having walked along Prince Street and Hull Marina to a welcome refreshment stop, with a reminder engraved on the benches of the Minerva pub of some of the city`s key phrases.

The pier was where the ferry used to cross the Humber from Hull to New Holland in Lincolnshire and houses three more of the fish sculptures with grayling branded into the timbers of the Victorian pier.

From here we moved along the River Hull to our lunch stop at the Sailmakers Arms on High Street, with some of the group crossing the river to the east bank to view the salmon over a new bridge.

Arriving here to view a crab as number 27 on the trail, we were now more than half way on completing our journey.

Despite our lunch booking and pre-ordered food order we had to wait for an hour for our food but at least it allowed us time to catch up on our experiences so far on the walk and enjoy a few drinks.

Lunch taken we were chasing Shrimp, Whitebait, and Electric Eel to arrive at Alfred Gelder Street and passed William Wilberforce`s House on High Street in the city`s museum quarter.

Here Mike explained that the White Hart Hotel has one of only eleven surviving ceramic bars in the whole of the country – astonishingly there is another in the city at the Polar Bear on Spring Bank.

Five more fish where identified before our pursuit of excellence stalled failing to trace fish numbers 36 Squid and number 37 Oarfish in Manor Street.

However, we did find the pub with the smallest window in the Land of Green Ginger – the George Hotel.

Two Hake are cut in steel as you approach the pub down an alleyway.

It was obviously time to explore the pub and have a final drink before carrying onto the finish line at Zander on Whitefriargate, passing a further two fish along the shopping street – Monkfish and Shark.

The trail complete there was just time to walk to the railway station to catch the 5.00pm train back to Scarborough, having experienced the delights and mysteries of the UK City of Culture.

Chocolate is good for you -Xocolat Ltd

more Introduction to our local seaweed farm and all its uses

From field to Fork

more For the last two and a half years sixty plus volunteers have run the library and organised a range of activities and events.

back ...in many ways - members are trustees of several charities; local organisation join us at our community fair to spread their message and raise cash; we join in events such as the CAMRA festival to raise money for local causes .......