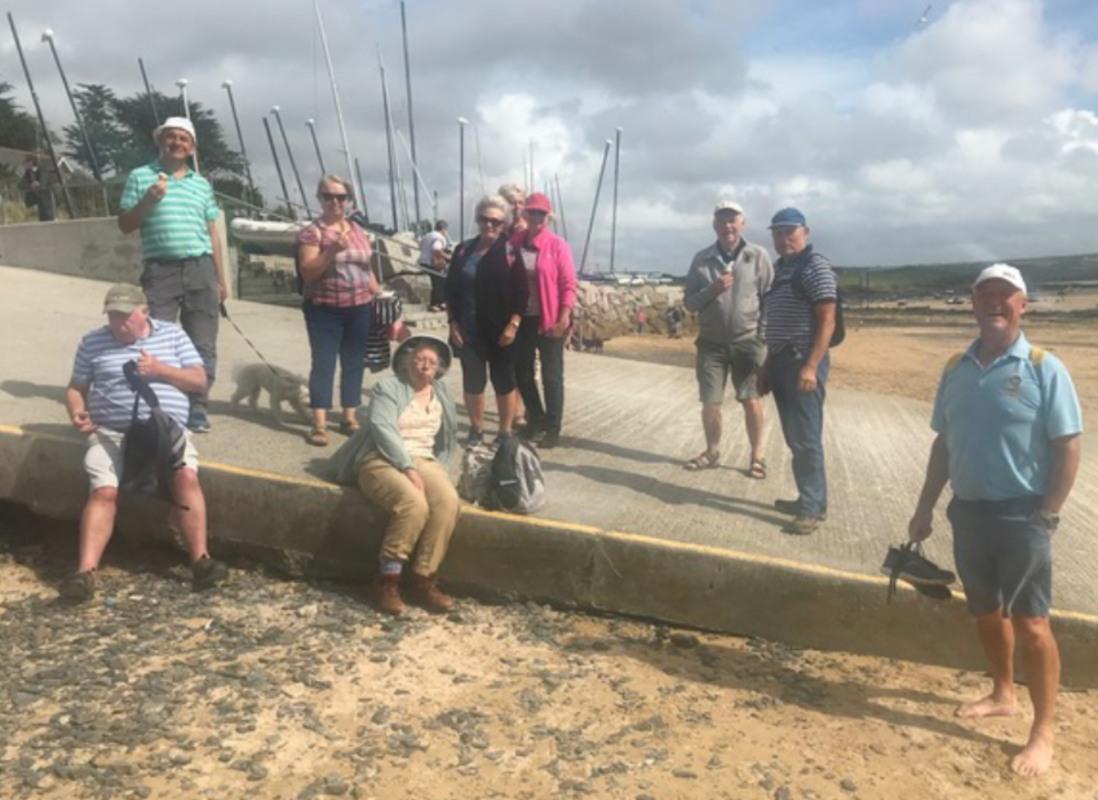 Rotary Walk - MIND Where You Go!

No, it wasn’t a failure of the risk assessment (which said, essentially, ‘There’s a pandemic! Keep away from people!’); it was Mrs Dodd, Mike’s mother, deciding, when we reached Rock, to walk home (in Rock) rather than back to Polzeath.

Wadebridge Rotary completed its section of the Big Rotary Cornish Coastal Footpath Challenge, instituted by Rotary Club of Truro Boscowan, walking the path from Polzeath to Rock and back again on Sunday 23rd August. This is not the geographically most challenging section of the coast path, I admit, but for a set of knees that averaged quite a bit over 60 years old it wasn’t bad going

We have raised nearly £600 (at time of writing – the amount keeps going up, even now*), half of which goes to Cornwall Mind so that it can continue to provide a range of wellbeing services for people throughout Cornwall who experience mental health problems. The other half will go to our own trust funds so that we can support other charities and community ventures in Wadebridge.

Wadebridge Rotary has supported Mind in Cornwall, using money raised by its annual Wheels classic car show, since 2017, when Mind was Wheels' headline charity. With Wheels cancelled this year due to the pandemic, that source of funds dried up, so that not only Mind but all the other local causes that we have supported over many years are missing out.

Club member, Nick Pickles, who lives right by the coast path in Polzeath, kindly provided his drive for parking, so the Magnificent Twelve converged there at 2pm: Clive & Yvonne Robinson, Keith & Gina Snelling, Ceri Goodfellow, Roy & Sally Vannoey, Kevin & Diana Smith, Wayne Mitchell and the Dodds. The afternoon was good for walking – warm with some cloud cover and a stiff breeze blowing in off the sea. Quite a lot of other people thought so too, and the coast path was pretty busy, but not so much that social distancing was a problem.

The walk was timed for low tide, so that the daunting height of Brea Hill could be by-passed on the beach. Though starting together, the walkers soon spread out, finding their natural pace. We reached Rock at varying times, and the front runners found a cafe with a grumpy ice cream seller. (‘Can I have a peach ice cream, please?’ ‘No.’ They had run out of peach, you see. How else could they convey that information.?) Kevin and Diana didn’t fancy an ice cream, or more accurately, queuing for an ice cream, and went back to the beach, sitting on the ferry ramp to eat their Eccles cakes and Kit-kats.

The ice cream eaters eventually joined them and we relaxed, with a view of the shortest ferry ride in the world (possibly). Toronto claims the world’s shortest ferry ride, 121 metres from Toronto Island Airport to downtown Toronto, but though I didn’t get out there and measure it, I reckon Rock to Padstow from beach to beach across the River Camel at lowest tide has it beat.

We set off back again. At Daymer cark park, about half-way, Wayne had just finished putting his socks and shoes back on when Kevin and Diana, bringing up the rear, arrived. Everybody else was waiting for us at the top of the steps. We had a chat for a while, then decided to move on again. Wayne was nowhere in sight. People were looking back on to the beach to see if he was chatting with an acquaintance. ‘No, he came up the steps just ahead of us,’ I said. ‘Perhaps he’s gone to find a loo.’ When Wayne didn’t reappear, we set off. I gave him a call, and he said he was ahead of us at Trebetherick Point. Not only had he turned left at the top of the steps without seeing everyone else, everyone else at the top of the steps had not seen him turn left and head off either.

But eventually we all reached Nick and Jane’s place for tea and biscuits, sitting in a socially distanced manner on their lawn. Nick even insisted that we leave the tea mugs on the grass, rather than helpfully collect them up, as a day or two outside would quarantine them.

‘Is this the first Rotary gathering since lockdown?’ Nick asked me. I said I thought it probably was. I don’t count coming across the Brocklebanks on The Platt as a ‘Rotary gathering’.

Many thanks to the walkers, and to everyone who has sponsored us.

Report and photo by Kevin Smith

* If you’d like to keep it going up, click here and donate on the JustGiving page: https://www.justgiving.com/fundraising/wadebridge-rotary