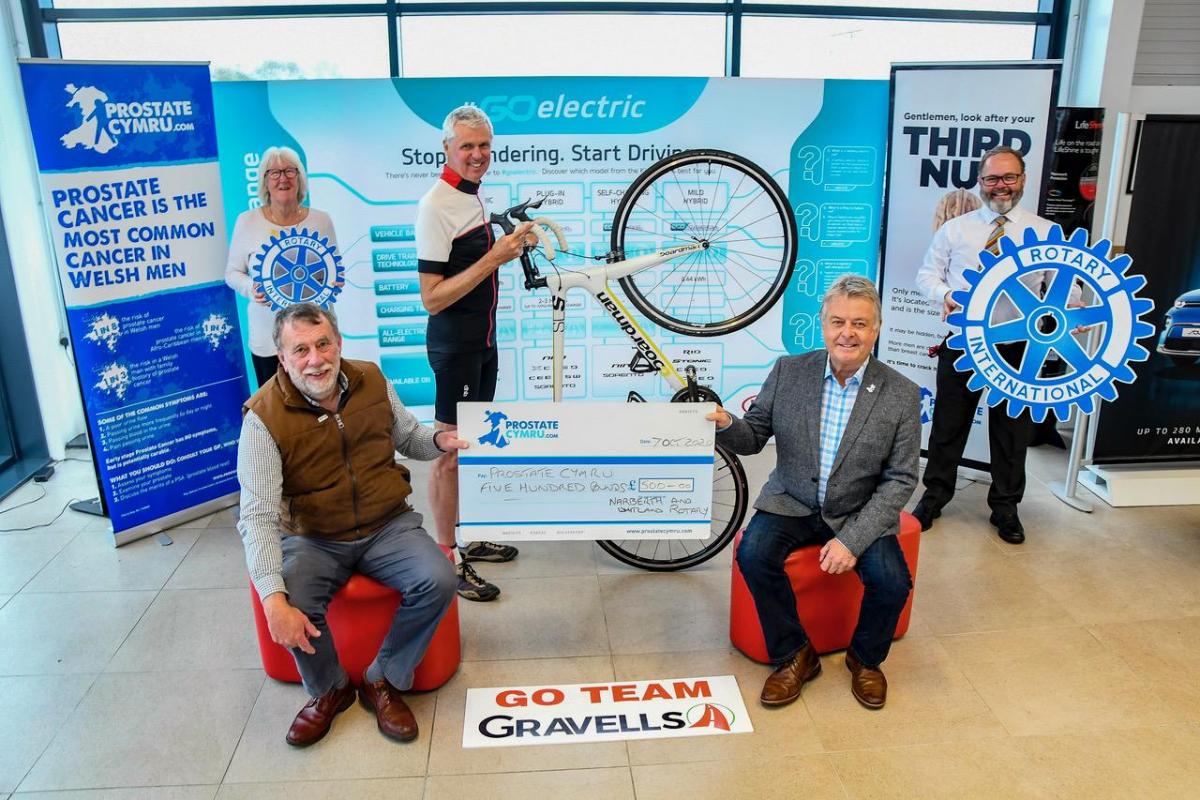 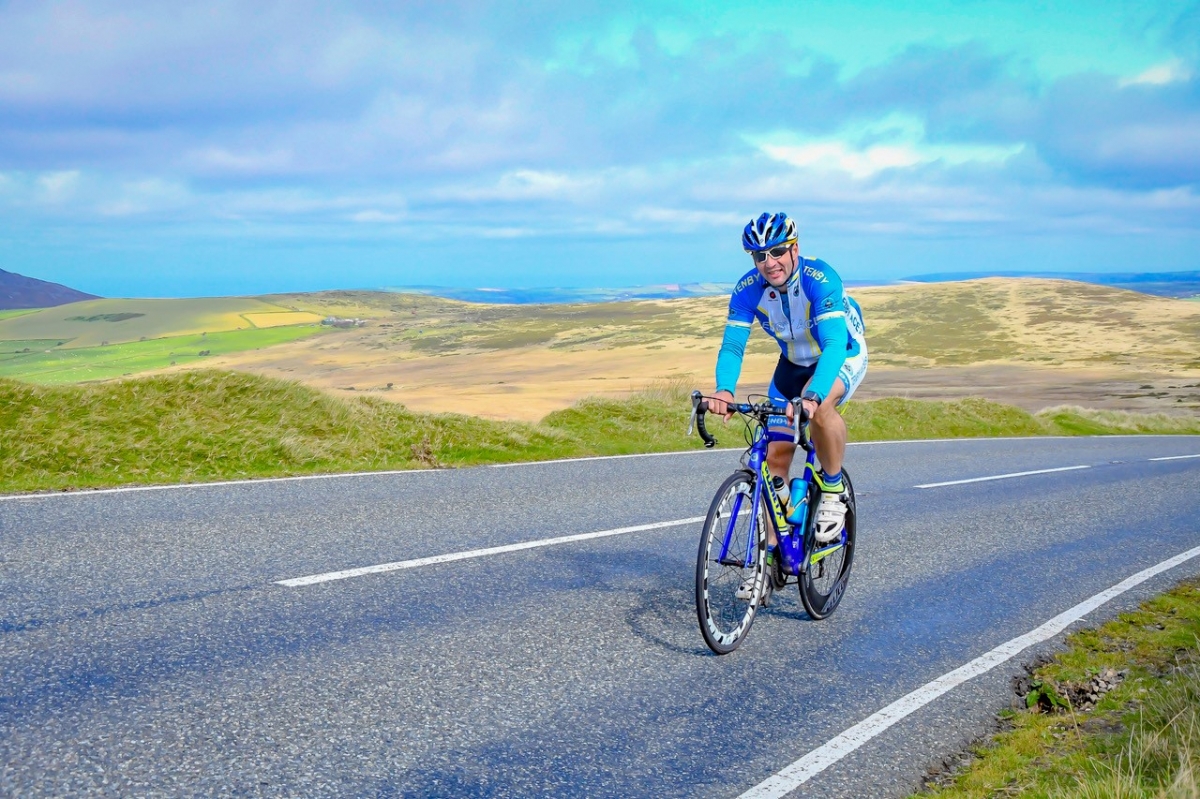 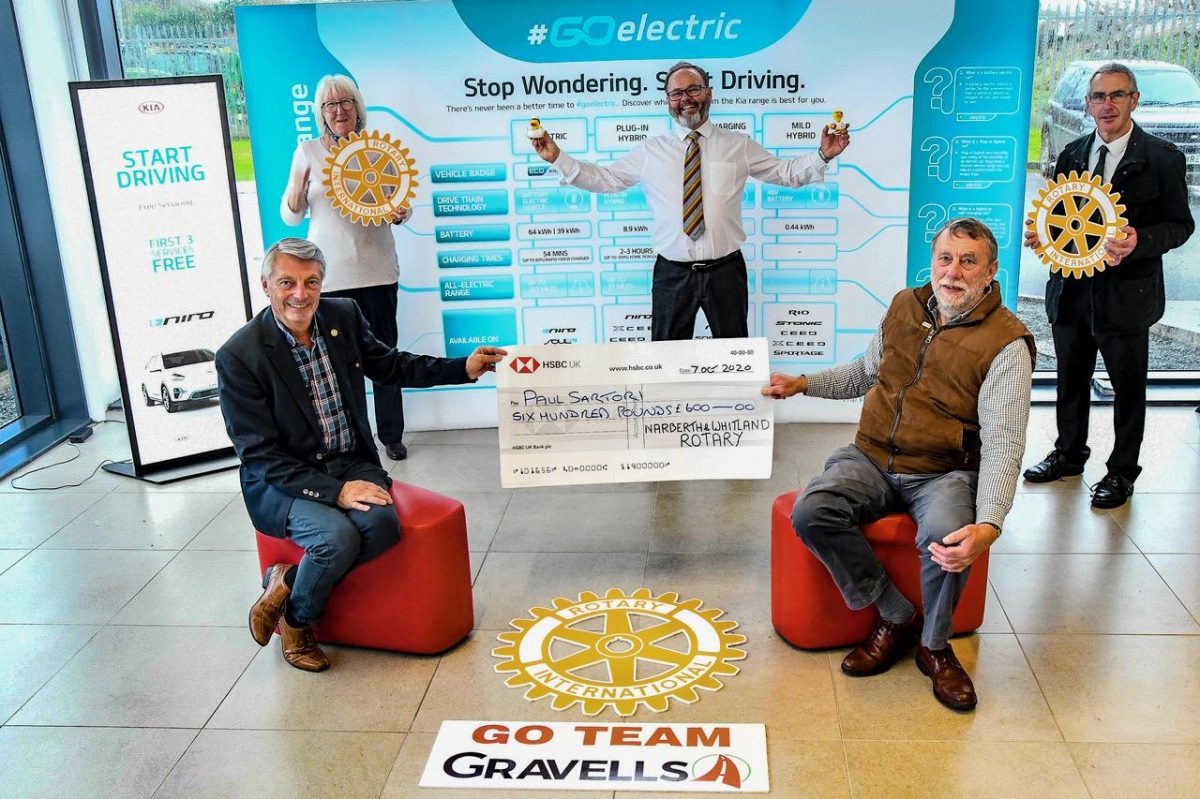 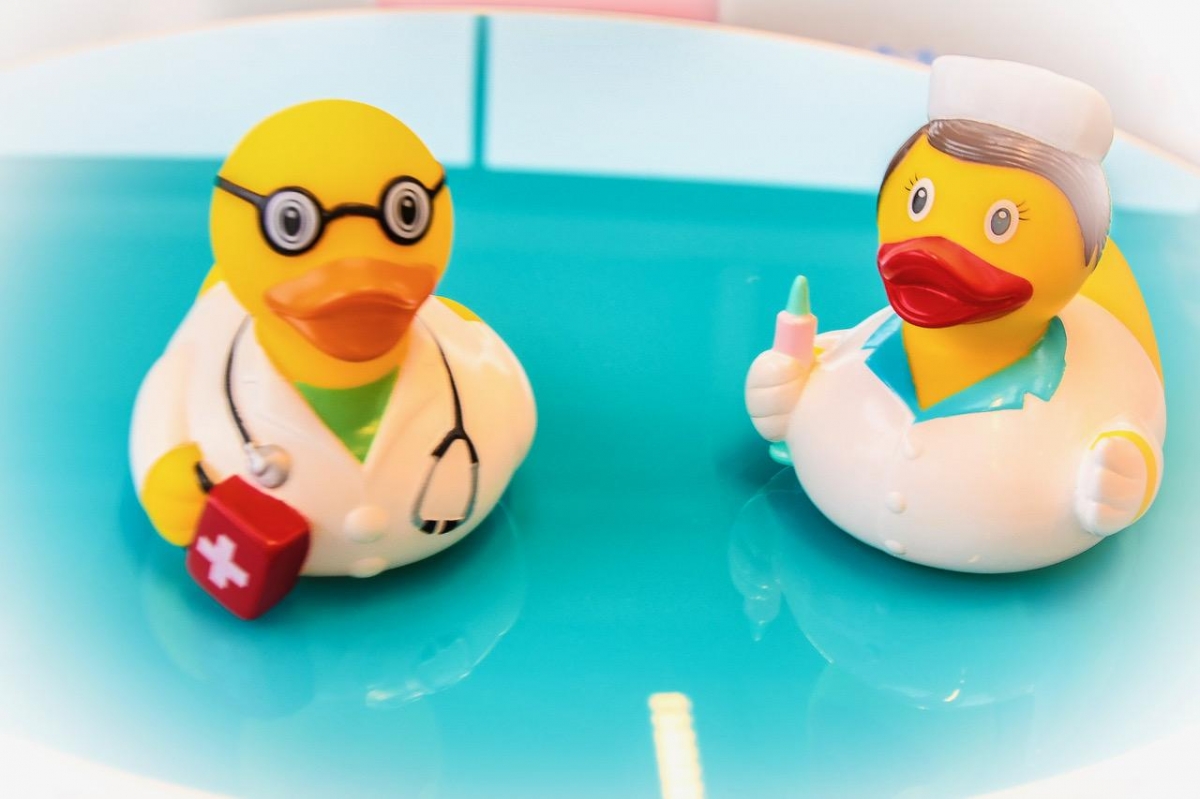 Narberth and Whitland Rotary are constantly looking at innovative ways to donate funds to good causes and local charities in need of help.

Two presentations recently took place at the Narberth Gravells Kia Garage for The Paul Sartori Foundation and Pembrokeshire Prostate Cymru. The Paul Sartori Foundation funds were raised at a Virtual Duck Race held in July and half the money raised has been given to the local Pembrokeshire Hospice. Andrew Rees Butchers sponsored prizes for the event and we are very grateful to Andrew for this kind sponsorship. Trustees Phil Thompson MBE and Ian Gravell were delighted with the donation, as this was only the second fundraising cheque presentation since the start of Covid19. Phil commented this donation would give 25 hours of one to one car for end of life care. Trustee Ian Gravell is seen with Rotarians holding a doctor and Nurse Duck who helped out with the virtual race this year.

Also in September the club held a cycle event called the Il Giro de Pembrokeshire. The organiser Rotarian David Haward was delighted with the response of cyclists in these difficult times. “The 50-mile route was sold out very quickly and so we ended up making more room for other cyclists wishing to do a 50 miles route in the second wave. We were very careful to get as much paperwork done online as possible and temperature tested everyone who took part” says David. President Chris Williams, is seen presenting the cheque to Pembrokeshire Prostate Cymru Trustee and Haverforwest Rotarian Brian Harries also present is Club Secretary Sue Pridmore, organiser Rotarian David with his bike and Rotarian Ian Gravell.

Brian stated that over 300 people from Pembrokeshire have received the robotic Prostate operation at the Heath in Cardiff in the 4 years it has been in existence. He remains grateful to the club for their continued support.

Two more initiatives that Narberth & Whitland are currently running are Charity Calendars “Then and Now” of Narberth Town and Whitland Town. These are available online at www.nwrotary.co.ukand in key outlets in both towns. They will make excellent Xmas presents. Details will be released shortly of a virtual Santa run. Last year the Rotary held a successful Santa Run in Narberth but because of restrictions this cannot happen this year.. The plan is to run the virtual Santa Run similar to the Duck race with Santa Software on order. We are very much looking forward to this and people will be able to buy ducks online at the above website.