An article by the President, Martin Atkinson 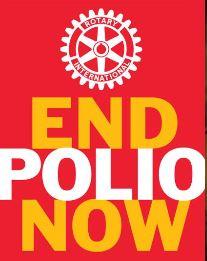 The miracle of vaccines!

Say the word “Polio” to any young person today and you will probably get a blank look; say “Polio” to anyone middle aged or more and it may well bring to mind images of friends in callipers, thoughts of iron lungs and vaccines on a lump of sugar.  However, the fact remains that the programme to end polio is one of the world’s great medical successes and is on the brink of becoming only the second major illness, with smallpox, to be eliminated through vaccination.

Poliomyelitis is a highly infectious disease that most commonly affects children under the age of 5.  The virus is spread person to person, typically through contaminated water.  It can attack the nervous system, and in some instances, lead to paralysis, and death.  Although there is no cure, there is a safe and effective vaccine, which has been used to immunize over 2.5 billion children worldwide.  Since 1988, when some 350,000 people - mainly children - were infected each year, there are now only two countries, Pakistan and Afghanistan, where cases of wild polio are still reported.  The large numbers of refugees living in cramped, unhygienic conditions and the active opposition of the Taliban, who have killed immunisation workers, have prevented the final defeat of polio in these two countries.

In 1985, polio infected 150,000 Indian children each year – one every 4 minutes – but the last reported case in India was almost 10 years ago.  In August this year, the World Health Organisation finally declared that polio has been eradicated in Nigeria, and therefore from the whole of Africa where, in the 1990s, it infected and often paralysed 75,000 children each year.  It was in 1996 that South African President, Nelson Mandela, partnered Rotary to launch the “Kick Polio out of Africa” campaign, and in 2000 tens of thousands of volunteers synchronised the vaccination of 76 million children in 17 countries across Africa.

It was in 1988 that Rotary, one of the world’s largest and most successful global membership and humanitarian service organisations, launched its Global Polio Eradication Initiative campaign to stamp out this terrible disease.  Since then, Rotary has used its 1.2 million members in 200 countries, including members of the two Rotary Clubs in Tunbridge Wells,  to work with the World Health Organisation, UNICEF and other international bodies, including the Bill and Melinda Gates Foundation and other benefactors in raising the £17billion cost of organising 20 million field workers to immunise 2.5 billion children.

Yes, there have been cases of vaccine induced polio as the oral vaccine uses a live but weakened strain of polio which, in rare cases can mutate and produce the very illness it is designed to prevent.  These cases are always localised and do not spread.  The use of injections, which use a dead virus, would remove this risk but the logistics of having enough trained staff to give the injections is just too great a problem for most developing countries.

Once children are protected from the threats of diseases like polio, they are free to gain an education, and empowered to escape poverty.  That is the power of well organised vaccination programmes.  However, until polio is totally eliminated, there is a risk of recurrence from infections in Pakistan and Afghanistan, so the fight must continue.  But, how many of the millions of children who have escaped this crippling disease since 1988 would say vaccination is a bad thing?