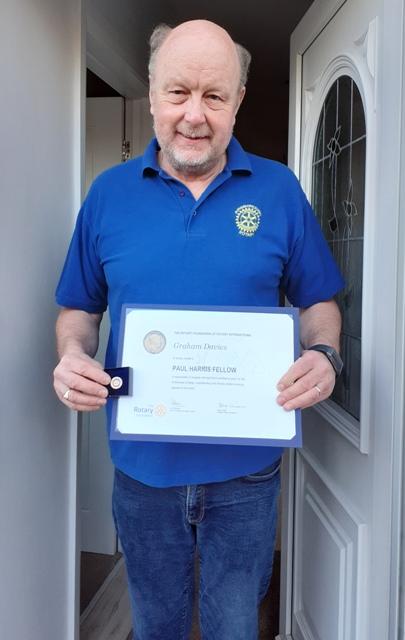 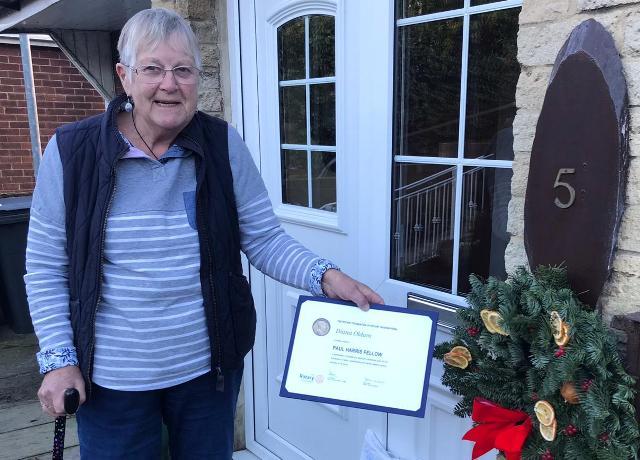 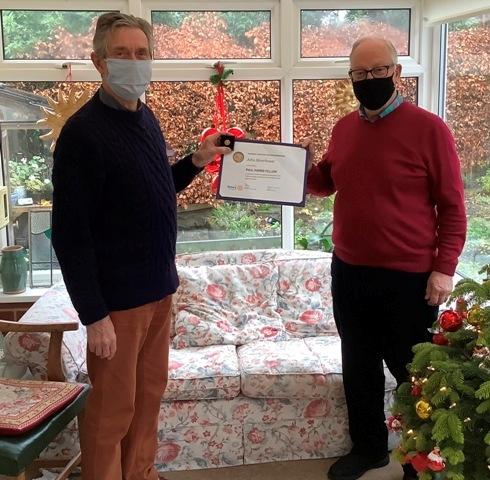 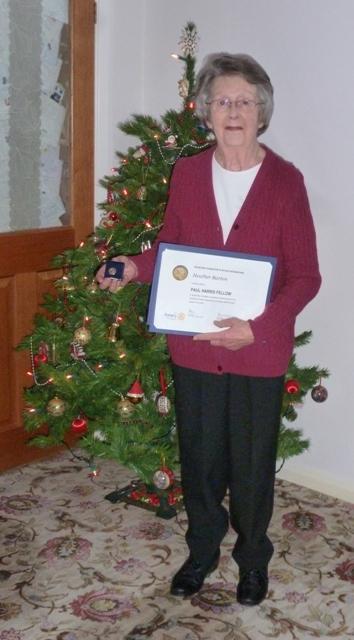 Heather Barton with her PHF award 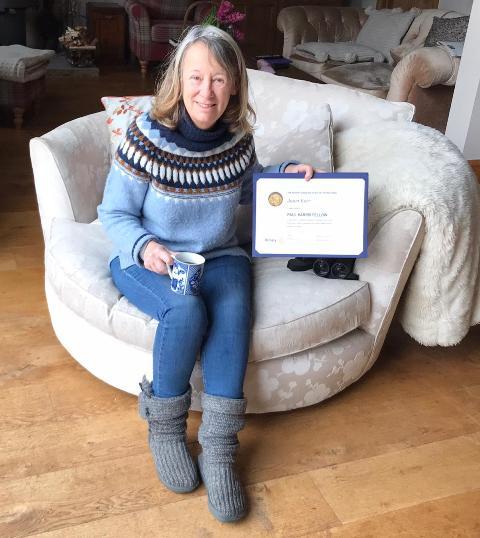 Awards named after Rotary’s founder, Paul Harris are made to individuals whose service has been out of the ordinary. In a change from the norm, the three current Paul Harris Fellowship (PHF) holders, delegated with the task of choosing this year’s awardees, asked for nominations from the whole Club’s membership and were rewarded with a thoughtful list.

Those selected reflected the diversity of ways in which individual Rotarians and non members can epitomise through their actions both Service above Self and Arch Klumph’s original vision of ‘Doing Good in the World’.

Graham Davies initially arrived at Thursday meetings pulling his case behind him straight from the airport and brought a strong business background into his subsequent Rotary activity. A Past President and current Club Secretary, with all that role entails, he has been a key driver behind the establishment of the Annual Beer Festival, the Global Grant for the computer suite at Mnyakanya High School and the burgeoning Yoga classes as well as being a reliable participant in both objective setting and budget predicting and monitoring. He is the first port of call for most members’ queries.

It was only during the application to Alcester for a PHF for Diana Oldam that we were reminded that this was her second Award and would be accompanied resultantly by a sapphire pin. District 1040 had presented the first following her two spells renovating and raising funds for the hospital on Ukerewe Island, Tanzania. During the pandemic Diana has continued to perform a myriad of volunteering tasks within the community. These have included producing a variety of Personal Protective Equipment for the Ambulance Service, Hospital Wards, Care Homes and most recently charities. She has particular pride in her designer. She has organised and produced food for each Beer Festival, volunteered at and baked for the Washburn Centre, made hot food for the Hidden Homeless and supported AVSED. Her long time support for Rawdon Parish Church should not be forgotten.

John Moorhouse has been Club President and has chaired both the Community and Vocational and Foundation Committees. The Dictionaries4Life project in local primary Schools owes a great deal to his enthusiasm. He was a prime mover behind the Guiseley Youth Project and throughout Covid has maintained imaginative links with the Club’s Honorary members. The Moorhouse plant stall, run in partnership with his wife Joan, is a regular fundraiser especially at the Easter Egg Hunt at Rodley Nature Reserve but also through the year.

The Aireborough Club has long remained one of a handful of Clubs trusted by Aquabox to source, pack and deliver to Wirksworth most of the requisite items specified for their disaster boxes. The regular yearly target on the International Committee’s agenda for Club Assembly has been a consistent 24 Aquaboxes. a. Begun whilst Geoffrey Barton was a member of Pudsey Rotary in the 1980s, the work continued following his transfer to Aireborough. His wife Heather Barton was our fourth PHF Awardee, equal partner in this lengthy lifesaving project, publicising the work in schools, community events and Tesco supermarkets. A proud Past President and holder of other roles within Aireborough Inner Wheel, she also supports other projects through her local church particularly the relief and development charity Samaritan’s Purse.

Nominated for her exceptional service, tenacity and positive sense of humour both before and during the pandemic and described as a powerhouse of ideas Janet Kerr was another Rotary convert through the Thursday meetings. The Annual Scarborough Conference Organiser with husband Bill she began the Purple for Polio barbecues, then worked alongside and learned from Heather Read on the Days for Girls/later Yorkits team. This led on to St. Mary’s, Menston and subsequent involvement with the Global Grant bid for the Mnyakanya Computer Suite. Further grants followed for Aireborough Children’s Centre for parenting skills (where she is now a trustee), the Fit and Fed holiday project for deprived families and Christmas present collection. Coming up with the Mobile Library and Christmas card sales for Martin House and Hope Pastures enabled her to maintain welcome socially distanced contact with members and the sewing team working on PPE. She now chairs the International Committee.