SEAFORD Rotary have supported the Bansang Hospital Appeal (BHA) for many years and have recently agreed to contribute to the cost of the refurbishment of dilapidated staff accommodation into housing for doctors and their families.


Bansang is the location for the only government hospital in the interior regions of The Gambia, a country in West Africa.  The hospital was built by the British and opened in 1938.  It has a catchment of around 600,000 people (out of a total population of c 2.5 million).

The Gambia has a short Atlantic Ocean seaboard and stretches about 300 miles eastwards.  Nowhere is it more than 30 miles wide north to south.  The country is surrounded, on its northern, eastern, and southern borders by Senegal.

The Gambia has become popular with tourists in recent years, around Banjul – the capital – because of its good weather and pleasant beaches.  Thus, this area has developed with good quality facilities.

As you travel east, however, the country becomes more rural, and by the time one reaches Bansang, a town in the Central River Division of The Gambia about 200 miles from the coast, it is totally rural and undeveloped.

Anita Smith MBE MRG, founder, and Director of the Bansang Hospital Appeal (BHA) came across the hospital in 1992.  Since its opening there had been no improvements and only basic maintenance.  How did Anita find the hospital?  Despite asking more than once, the only answer has been “exploring”.

Since then, she has devoted her life to improving the hospital with remarkable results.  It is now considered to be one of the most advanced hospitals in sub-Sahara west Africa.

The most recently completed project was refurbishment of the enormous 80 bed Children’s unit.  The first phase at a cost of £19,000 replaced cardboard ceilings with plaster ceilings throughout, greatly reducing heat ingress from the roof void.  All electrics, lighting and ceiling fans were replaced with low energy alternatives.

The resourceful staff, knowing that the result would be so beneficial, carried on providing the best possible care.  There is now a tiled malnutrition ward, premature baby ward, neonatal ward, ICU ward, CPAP (Continuous Positive Airway Pressure) unit among other specialist areas, together with staff room, solar battery room and medical storeroom.

This full children’s unit was open and fully operational on 20th August 2020.

The latest project, the subject of the 2020 Christmas appeal, has been the refurbishment of 4 dilapidated units into units for housing doctors and their families.  Providing staff accommodation has been a key feature of BHA’s programme for many years.  Over 60 accommodation units have been provided and this has been key to achieving the remarkable staff retention of over 95%.  The first unit of the 4 is occupied, the second is now ready for occupation, the third is fully funded.

Seaford Rotary are pleased to have contributed to the cost of the final unit.

To find out more about Bansang Hospital Appeal, visit https://bansanghospitalappeal.org. 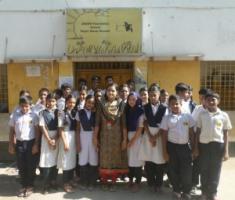 more Proud teacher and her pupils

more ALTHOUGH a relatively small contribution, Seaford Rotary has each year donated towards the 'End Polio Now Campaign'. At the Rotary District Council meeting held on Saturday 31st October 2020, Seaford Rotary was one of 14 Clubs who received a certificate.

back Reports on Support for Activities of Overseas Charities