Miles Morgan, founder of Miles Morgan Travel, gave an inspirational talk to Members and Guests of the Ross Rotary Club

School was not “Miles’ thing”; an embarrassment as his father was his Biology Teacher. There was difficulty in the Morgan household when Miles failed his Biology O-level!

However, his father had a Saturday market-stall, selling pot-plants. Assisting, Miles found his true Sales calling. Miles gave tips on stall presentation for best advantage, including hanging on to the best example of a plant until the end, as “having already been sold to another customer”, in order to give the best “window” for selling the plants of the same type.

Travel Business entry came with a junior role with Pickford’s Travel. Having no qualifications or relevant experience, Miles’ ability to sell included “selling himself”. He wanted more responsibility but was frustrated from arranging the shop window in the way that he felt would draw more customers. A move to Bristol to ‘Baker’s Dolphin’ followed and humble living accommodation.

Within 3 months, Miles rose to assistant manager of the shop, then manager. He led a project for Supermarket Travel Shops. Miles always wanted ‘more’. He asked for jobs at higher levels. “Let me show I can do the job and you can pay me more when you see results”. An admirable concept. He asked to become a Director on that basis. When denied, he moved on.

Miles became Airtours IT project manager. It was a valuable experience. Miles learnt a lot but did not like it. After amalgamations in the Travel Industry, Miles was MD Travel House, acquired by Thomson Group, but made redundant in restructuring just 2 months later.

Meteoric rise with Lunn Poly in charge of Web & Call Centre sales led to a team of 800. He was at the top of his profession, but it was not fun! He left in 2006 to begin again with his own chain of shops as Miles Morgan Travel, the first bought from Thomson Travel. The first 2 years were tough, lonely and loss-making. But Miles was running his own show, there could be no top-down restructure to end his job and it was fun again.

Despite those saying that travel in the high street was dead, Miles built a brand that many in the Market Towns like. Service is very personal and personable as with Manager Rtn Nina Hywood (nee Robersthaw), and Team in the Ross Shop.

Miles believes that people make both business and sales. His enthusiasm unabated, Miles continues to believe in Travel in the High Street, even after the ravages of the Covid-19 pandemic. Miles was very warmly thanked by Ross Rotary Club for his excellent presentation. 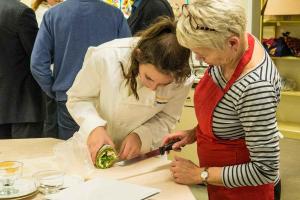