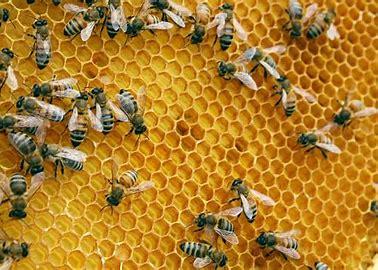 President Kathy certainly has the buzz when it comes to bee-keeping. She’s been keeping bees for 10 years and regularly presents day-long taster sessions for novices. Kathy told us her talk would be a very much slimmed-down version of her Taster Day presentation.

Way back 4,500 years ago the ancient Egyptians kept bees in simple hives and collected the honey. Jars of honey have been found in pharaoh tombs. During the medieval period monasteries were busy beekeepers, making beeswax for candles and honey for mead. However, it was not until the 18th century that hives were designed that enabled the harvesting of honey without destroying the colony.

Beekeepers keep bees to collect honey and other products such as beeswax, propolis and royal jelly. Propolis is a resinous mixture collected by honey bees from tree buds or sap which they use to seal up open spaces in the hive. Royal jelly is a secretion used to nourish the larvae and is thought by many people to have health benefits.

A colony of bees consists of a queen bee, thousands of female worker bees, and thousands of male drones. The queen bee is the only sexually mature female in the hive and all the workers and drones are her offspring. The queen can live for 3 years or more and can lay some half a million eggs in her lifetime. Eggs are laid singly in a cell in a wax honeycomb, produced and shaped by the worker bees.

At the height of summer when activity in the hive is frantic the life of a worker bee may be as short as 6 weeks. Worker bees co-operate to find food and use a pattern of dancing, known as the waggle dance, to communicate information with each other. For the first few weeks of their life they perform basic chores within the hive: cleaning empty brood cells, removing debris and other housekeeping tasks, making wax for building or repairing comb, and feeding larvae. Later, they ventilate the hive or guard the entrance. Older workers leave the hive daily, weather permitting, to forage for nectar, pollen and water. Drones do not work or forage; they have no other function than to mate with new queens.

All colonies are totally dependent on their queen, the only egg-layer. She can choose whether or not to fertilize an egg as she lays it; if she does so, it develops into a female worker bee; if she lays an unfertilized egg it becomes a male drone.

Kathy’s very comprehensive talk included a great deal more information than space permits here. If it was a taster of a taster day then this brief report is merely an amuse bouche. Contact Kathy if you are interested in keeping bees, she would be more than happy to help you.