Speaker: John Stooke. John's book "Last Orders" looks back at 100+ Ale and Beer Houses that have disappeared from the streets of urban Swindon between 1700 and the present day. 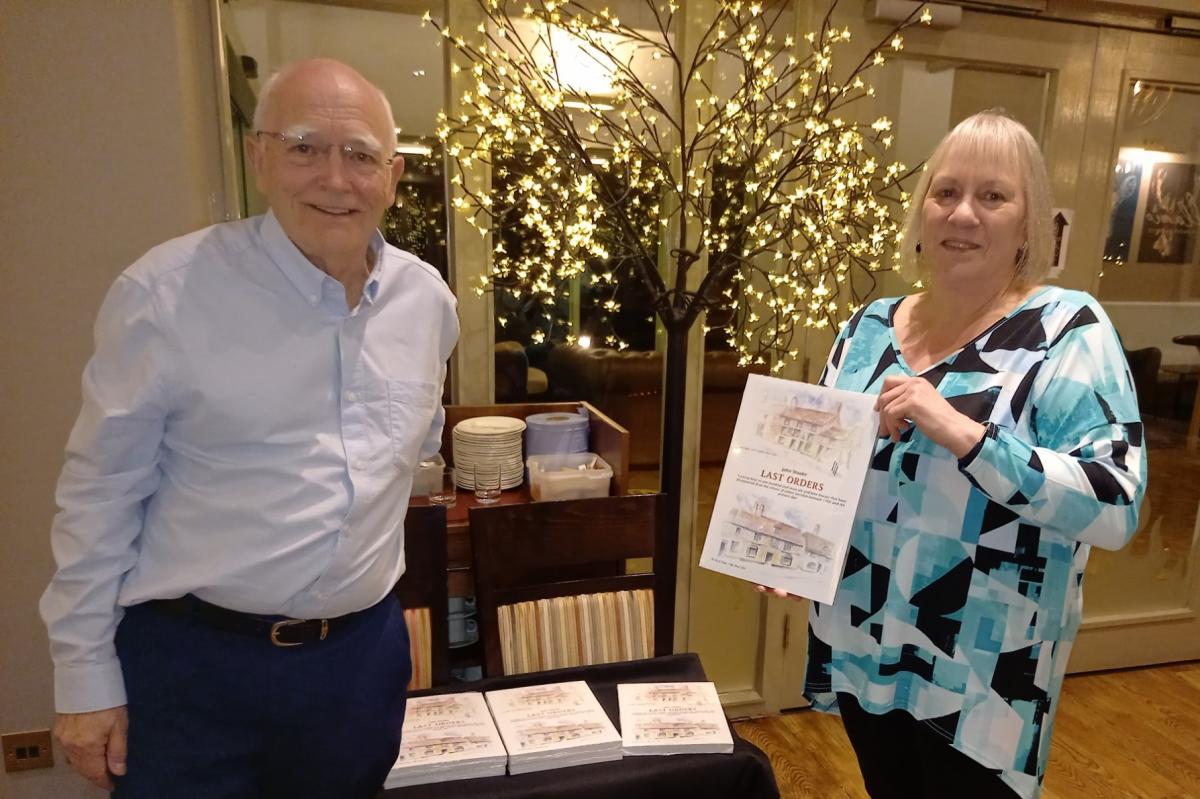 In the picture: Our speaker, local historian and self-confessed Swindophile, John Stooke, with President Kathy

For all his adult life John has had a passionate enthusiasm for pubs and for drinking real ale in them.  He’s also fascinated and intrigued by the history and heritage of Swindon.  How could he indulge both obsessions simultaneously?  The answer was to write a book – “a modest, though time-consuming effort” – in the hope that people in the future might understand and experience a little bit of why he is so passionate when they read his memories of Swindon’s pubs from the 1950’s to the present day. The book is called “Last Orders: Looking back at 100 and more ale and beer houses that have disappeared from the streets of urban Swindon between 1700 and the present day.”

John was born in 1947.  At that time his father was the licensee of an “Outdoor Beerhouse” situated at No.1 Rolleston Street, Swindon.  In 1950 the family moved to 481 Ferndale Road, a house that had been destroyed by a WW2 bomb and rebuilt as a small off-licence.  John’s earliest recollection is seeing the collapse and death of a horse drawing a Co-op  bread delivery van right outside the off-licence in 1952.  He loved going into town with his mother and as a small boy has an abiding memory of peering through an open door of the Fox Tavern on the corner of Cromwell Street.  The smell of hops overlaid with a smell of smoke, in a noisy and crowded place, was “an entirely alien world into which a 7-year old boy could have no possible access”.

By the time he was 16 his lifelong love of the English alehouse had begun and he was drinking in the Oddfellows Arms in Cricklade Street (brilliant steak-and-kidney pies), or the New Inn in Brunel Street (best cheese and onion rolls in the world) or the Frome Hotel.  Why those now long-gone places?  Perhaps, he says, because the landlords didn’t worry too much about dodgy looking underage customers who stayed in a corner and kept quiet.

Pubs are a uniquely British institution that continually showcase our nation’s brewing tradition and have provided an essential community facility from the earliest of times.   John has travelled extensively in the world and says that he has never discovered anything that remotely compares to the heritage, the atmosphere and the affection in which the British pub is held.

In 16th century England there were about 19,000 alehouses, taverns, and inns. That translates to 1 per 200 people.  If that were the case today there would be one pub on every street in Swindon.  Sellers of alcohol have been licensed since 1552 but, fast-forwarding to 1914, the First World War brought about the introduction of draconian laws to drastically reduce drinking.  Opening hours were restricted, taxes and duties increased and, bizarrely, it became illegal to buy anyone a drink (including one’s own spouse),

Clearly, John knows his subject and enjoys sharing it with others in his easy-to-listen-to style.  He finished his illustrated presentation with a short quiz: questions about the connections between some famous faces and Swindon pubs.  None of us knew any of the answers.  For example: what is the connection between Richard Burton and The Three Tuns in Wroughton?   For the answer, you will have to buy John’s book and turn to page 93.  400 pages long, the book is a thoroughly good read.  It costs just £10, £3 of which goes to the Swindon Women’s Refuge.

After 4 years of meticulous research (and hours spent writing in the Blunsdon Arms pub) local author John Stooke’s book “Last Orders”, tracing the history of 120 local pubs that have disappeared from our streets since 1700, was launched at the Swindon Central Library, on Saturday 19th October 2019. The book is written to support Swindon Women’s Aid, with the charity receiving directly, £3 of each £10 selling price. The book runs to 400 pages, includes 800 images and is an impressive heritage record of Swindon’s best known disappeared alehouses. Natasha Moyles, spokesman for SWA said, “We at Swindon Domestic Abuse Support Service are delighted to have been chosen as the beneficiary of this fascinating project. It is a continuing challenge to raise adequate funds for the essential work we do locally. Initiatives such as John’s enable us to continue to help more victims of domestic abuse within Swindon”