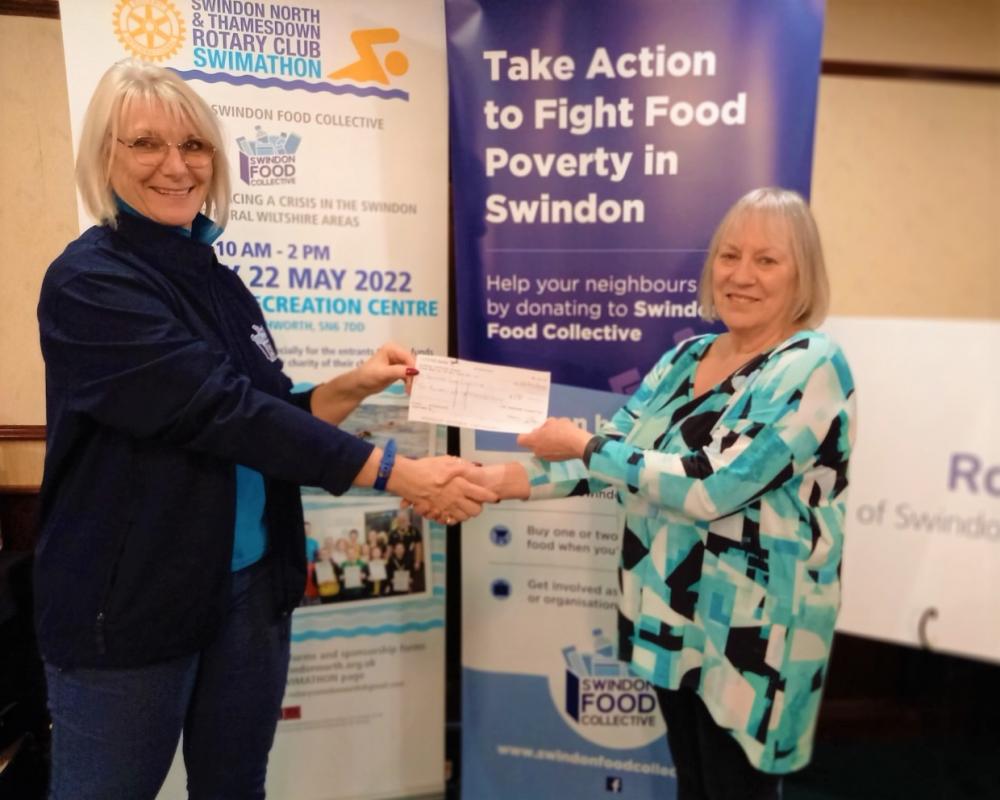 Our Speaker at this meeting was Cher Smith, the Manager of the Swindon Food Collective (SFC), an independent food bank based in Swindon.

Our Charity Swimathon on 22nd May 2022 is raising funds for the Swindon Food Collective.

Cher said there is a need for a food bank in our area because the current levels of poverty and deprivation are causing a growth in numbers of people falling into poverty and going hungry.  The SFC hands out food, toiletries and cleaning products to people on a low incomes.  It’s not just for people on benefits, it’s for any family or individual on a low income and no-one is means tested.  SFC’s mission is to make sure that no one in the Swindon and surrounding area goes hungry unnecessarily.

There has been a food bank in Swindon since 2007 but the charity that ran it closed in 2018.  To save the service the staff and volunteers decided to form a collective and launch a replacement charity.  The new charitable group opened on 8th June 2018, the first working day after the old charity closed.  Three of the volunteers acted as directors of the new community company, a bank account was opened and an application was made to become a registered charity.  This was achieved four months later. Currently, the Swindon Food Collective has seven trustees and is going from strength to strength.

At first, Cher was working more than 40 hours a week doing 4 people’s jobs.  However, with the help of four part time staff, the trustees and more than 65 volunteers, she has reduced that to 30 hours a week.  Most of the volunteers are over 65 years of age and without their support the food bank would not be able to operate.  The volunteers work for 3 hours on just one day a week, perhaps in the warehouse, or the distribution centres or as drivers or administration assistants.

Running costs are £50,000 plus a year and the Collective is totally reliant on donations made by local people.  It also receives grants from Charitable Trusts and Foundations to help fund aspects of its work and cover core costs or equipment.  It has a large warehouse in Westlea thanks to some tremendous support from Amazon and W H Smith.

Annually it is providing 7,692 meals and it finds that September to March is the busiest time of the year. Food donations are collected from supermarkets, weighed, and sorted by Best Before date.

The Collective has 55 referring agencies sending people to it.  People collect the food from one of eight distribution centres which are open for 2 hours at a time, Monday to Friday.

People needing food come to one of the centres and, typically, leave with 14 bags.  The Collective also does Easter Hampers, Summer hampers and Christmas hampers.  Also “Home from Hospital” bags.   In the last fortnight, 3 tonnes of food have gone to the Polish Centre in Swindon in response to War in Ukraine appeal.

In the picture: Cher Smith is seen receiving a cheque for £250 for the Swindon Food Collective.  The money is a donation from the Openwork Foundation, a supporter of our Swimathon in May.