Speaker: Kelly Smith from The Friends of Fairford and Lechlade Communities 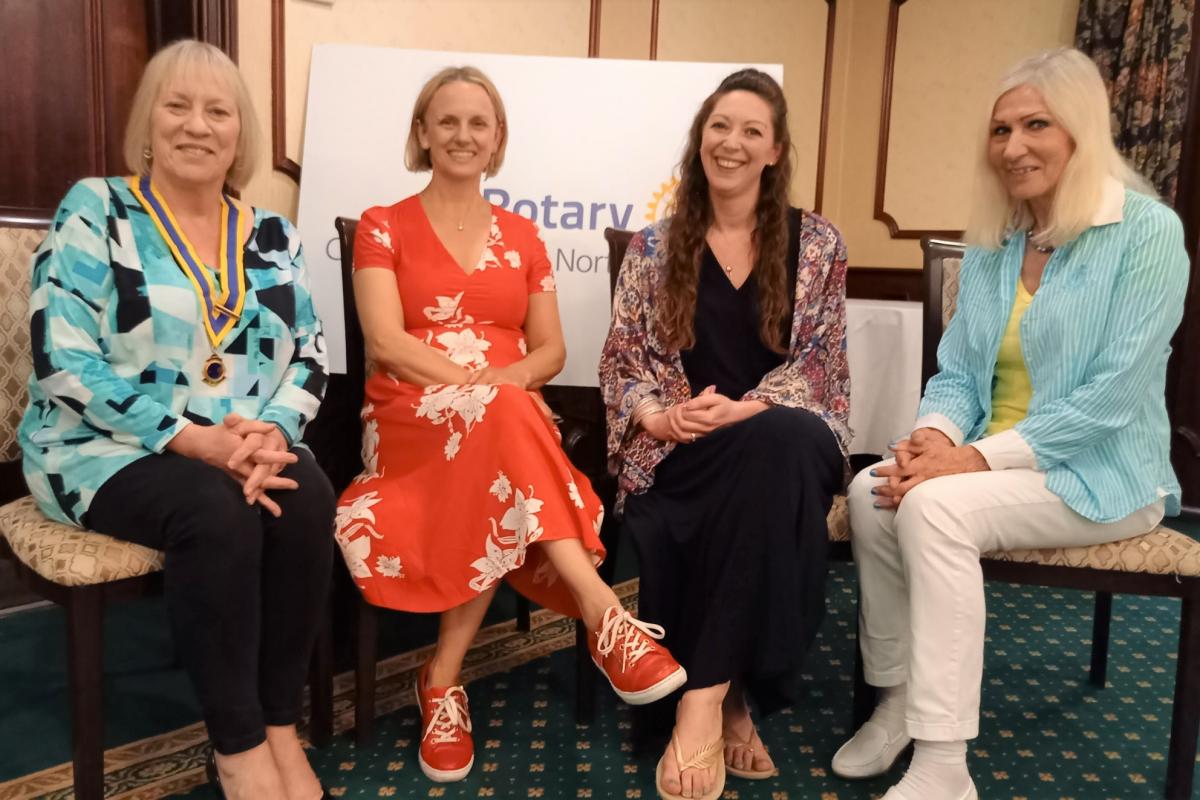 The Friends of Fairford and Lechlade Communities (FF&LC) is a registered charity which provides health and social care to people living in Fairford, Lechlade and the surrounding villages.  At this particular meeting the Rotary Club had great pleasure in welcoming Kelly Smith, the FF&LC’s general manager and Shelly Welsh, Chair of the Trustees.

In the picture Shelley (left) and Kelly (right) are seated between the Club’s President Kathy and Vice-President, Ann, who proposed a vote of thanks to our speakers.

Kelly was the main speaker and she began by saying that the Group was first established in 1991 with the name of the League of Friends of Fairford Hospital.  Initially it supported the provision of healthcare services in Fairford Hospital, particularly palliative care beds.  These beds were discontinued in 2007 and since then the Friends are providing care and support to the wider local community.  It organises and funds quite an extensive range of services for which the demands are ever increasing year on year.  It has been called the Friends of Fairford and Lechlade Communities since 2019 and today has a team of 12 paid staff, mainly part-time, and a huge bank of local volunteers.

FFL&C can call on a team of community nurses who provide end of life care for patients in their own homes.  These nurses typically support around 70 patients and their families a year.  It also has a number of volunteer drivers who make over 900 journeys each year taking people to their various medical appointments.  The nursing team has been particularly busy as has the transport service, which has had to undertake many more medical related journeys, especially for Covid vaccinations and boosters.

It runs a Lunch Club so that the frail and elderly can enjoy a good lunch together  twice a week. In addition it provides funding for various services that help and support the local community.  For example a foot care clinic and community first responders.  They also have a contract with the Prospect Hospice in Wroughton, which costs them £25,000 a year, which enables them to send patients to the Hospice for the full range of its services, free of charge.  It also issues grants to worthy causes and has awarded a total of £88,500 to date

The Group is financed by means of its charity shop in Lechlade which receives good support from the local community in terms of both donors and buyers.  It organises an annual house to house collection which involves over 100 volunteer collectors visiting around 5,000 houses. This effort raises in excess of £20,000 every year.  They also run a 100 Club and a number of fundraising events, such as open gardens, craft fairs, concerts, restaurant evenings, card sales and raffles which together raise some £6,000 annually.  And they receive regular and one off donations as well as legacies.

In short, FF&LC receives tremendous support from its donors and the many volunteers who freely give up their free time, and it provides excellent and valuable support to the vulnerable, the elderly and the unwell living in Fairford, Lechlade and the surrounding villages.