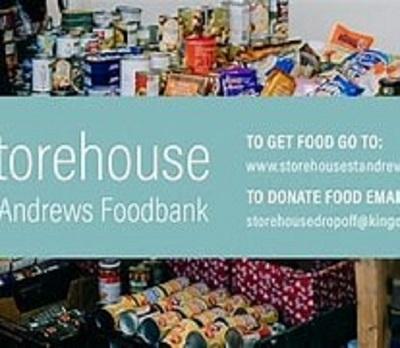 Opening this week’s meeting, President Mike Dow reminded members that one of the key aims of Rotary is to support local charities and community groups. On that note he was pleased to introduce Jack Johnson and Lucy Clarke who are the organisers of the St Andrews Storehouse Foodbank, based in the recently-renovated St David’s Community Hub.

A number of Club members are volunteers for the organisation.

Jack and Lucy are graduates of St Andrews University and chose to remain in the town thereafter.

As Administrative Manager of Storehouse, Jack’s main tasks are to source funding, donations of money and foodstuffs, and liaise with stores such as Morrisons and Tescos who have set up Foodbank deposits in their premises.

Jack revealed that Storehouse was founded in 2006 to help individuals and families who had fallen on hard times for a wide variety of reasons.

In 2016 they began to monitor and record their work. This has thrown up some worrying figures. As an example Jack said in that first year some 900 food parcels had been distributed to about 200 recipients.

The rise in numbers since then has been huge – to some 3000 bags of basic-need foods this year already – partly as a result of the pandemic, partly due to changes in Government policy which have made an impact.

Clients of Storehouse are referred by GPs, social work departments, job centres and other outfits.

An increase in provisions is clearly necessary. Jack commented, “We are merely a plaster on a stab wound and cannot ourselves solve the problems of poverty, addiction, job loss and so on.”

His words clearly struck home with his audience. Particularly when he went on to say the existence of Storehouse is not just to provide basic foods but to aid with social interaction, community help and deal with many issues such as mental health and imminent starvation.

Said Jack, “We cannot try to change peoples’ lives for the better without community help.”

Lucy, who is Operations Manager at Storehouse, sends out weekly lists on social media of required provisions. She explained there are 30 working volunteers, plus another 40 either on a waiting list or ex-volunteers who can be called in when necessary. There has recently been a response from University students to lend a hand.

Member Grant Cargill – who himself has been a Storehouse volunteer for 18 months – thanked Jack and Lucy for their presentation. The increase in activity over the last few years is astonishing, he said, and the Kilrymont Club would continue to support Storehouse efforts.