Our activities were severely constrained during this period. However, we did maintain our giving:
NORTH CUMBRIA FOOD BANK £1410
CALVERT TRUST £1270

This year has been unique in the history of the Club.

Not only have the Presidential duties been shared between John Kennedy, Anthony Payne and Dorothy Whitfield Bott, but all meetings throughout the past year have been held via Zoom because of the COVID19 virus.

Government lockdown restrictions and the circumstances of our members (we are an ageing Club) have meant that many of our customary activities have had to be curtailed.

Despite this unprecedented situation, some 50 meetings have been held on a weekly basis since the previous AGM.  Overall attendance has been encouraging, (typically 12 – 16) and there is good rapport within the Club. Every effort has been made to ensure that welfare and fellowship is maintained with all members who choose not to participate in Zoom activities for whatever reason.

Weekly meetings have been chaired on a monthly basis by each of the three joint Presidents, and consultative meetings have also been held with the Secretary via Zoom prior to each changeover.

There has been an increase in the number of visits (virtual) made by members to other clubs and correspondingly this club has received more visitors.

Speakers - Advantage has been taken of Zoom’s facility to allow internet access to a wide range of speakers.  Thanks to the untiring efforts of our enterprising Secretary, presentations made at our meetings during the past 12 months include the following:

A new scheme was the poetry competition organised to raise funds for the Wasdale Mountain Rescue Team (after their rescue of a heavy St. Bernard dog {Daisy} from Scafell Pike). Entry fees, donations and sales of the anthology of various poems and limericks, raised around £200.

after face-to-face meetings were discontinued, whereby members make a voluntary monthly donation of up to £5 for each meeting they would have normally attended i.e., a maximum of £20 per month.

The proceeds from our several virtual race evenings have gone towards Rotary Foundation.

Donations – Notwithstanding the above limitations, donations have been made towards the following:

Other Activities – This past year have been restricted to:

Attending to the Rotary Memorial Garden in Whitehaven

Organising and Assisting with the LIARS Christmas Lunch

Members of the club are associated with a wide range of voluntary support activities which are listed on the Rotary Club Central website.

Presently we are an ageing club consisting of 20 active members with ages ranging from 65-94. By the end of this Rotary year there will only be three members under 70.

We also have one much younger Associate member who, with our full support, is working hard to establish a new local Rotaract Club.

In addition, we have four Honorary members, three of whom were previously active members but are now unable to continue due to health constraints.

With a limited catchment area, recruitment currently poses a major problem. The pragmatic policy we have been following is that we do what we can.

In the light of the above, rather than take on major projects we are more suited to support/participate in smaller but significant events in the local community. 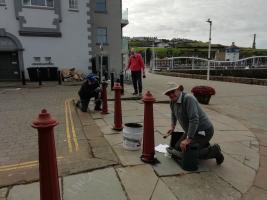 This is an oak model of the Candlestick which is a prominent chimney at Whitehaven Harbour. It was part of the mine ventilation system. The model is to 1 in 60 scale. It was commissioned by David and Dorothy Whitfield-Bott, RC Whitehaven. 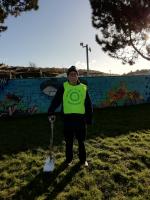