We donate Christmas Hampers to the local Food Bank 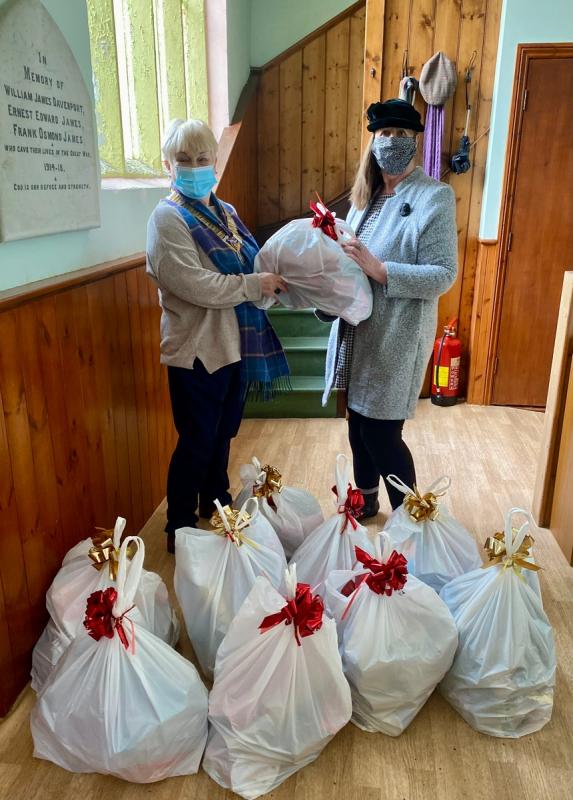 In November, as Christmas approached, our Rotary Club members wanted to find a way to help those individuals in the community who are struggling to make ends meet at this time of year.

To that end, the idea of Christmas Hampers, to be donated to the Knighton and East Radnor Food Bank, was formed. Thanks to the efforts of the Rotary Club, as well as the generosity of the Co-op in Knighton, Tesco Stores in Ludlow and Griffiths Stores in Leintwardine, items for ten hampers were purchased and packaged up by members Angela Ellis, Sheila Smith, Kim Smith and President Margaret Thorp. These were then delivered by President Margaret to Helen Anderson of the Food Bank on Wednesday December 3rd and we are so pleased to report that the ten hampers have been able to support 15 adults and 14 children (aged 3 months – 15 years)

As President Margaret said “As a small independent crisis food bank, the Knighton and East Radnor Food Bank rely solely on donations of basic store cupboard food, toiletries, pet food, plus baby & teen essentials, from the local community, in order to keep open”. Helen Anderson added “The gift of additional Christmas treats makes such a difference to those in our community who are struggling to choose between eating and heating.”

Helen also contacted us today, Sunday December 5th, to say “The friends we help do not have a voice, or put their name to letters in the newspaper, but they have contacted me to say they hadn’t dared to think of Christmas this year, and several cried, they were so overwhelmed by the generosity of the Knighton and District Rotary Club members, and the care that had been taken to gift extra special treats.”

Rotary member Angela Ellis responded by saying “We are delighted to be in a position to support the Food Bank and the response to our Christmas Hamper donation is very moving”. She added “We are also happy to be in a position to help our local communities, thanks to those give to our fundraisers so selflessly. We will share more of our community-based activities very soon.”

Christmas support for our communities

more Christmas trees, cakes, meals and a collection for charity in December 2021

We donate to our local foodbank during COVID-19 difficulties

more During this critical time for many families, we have donated £500 to our local food bank along with another generous donation by another Rotary member....

Thank you and update from Knighton Food Bank

more This letter outlines the philosophy and reason that we need a food bank in East Radnor. An important read!

WE'RE IN THE PAPERS!

more You can see scanned copies of the promotion we are getting in the press......

Our second Tea Dance and afternoon tea for the community 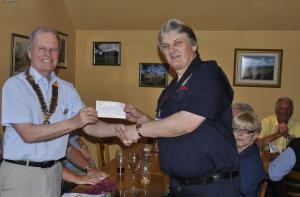 Dinner and First Responders speaker at the Baron

more Tonight we welcomed Ian Owen from the Bucknell FIrst Responders to speak to us, as well as Ms Gaye Edwards from the Leintwardine CFR and Chris Sansom from the Midlands ambulance.

Tuffins Supermarket support us through their MADL charity

more Tuffins raise money for charity through their "Making a Difference Locally" programme and kindly donated £100 towards our charitable efforts in the local community.

more Today we presented a cheque for £1000 to the Knighton Food Bank with the support of the Ludlow Rotary Club. See the newspaper article on this special event on our "Latest News page" under "Newspaper Articles 2014"

Presents for the elderly

more Santa came to the lunch put on for the elderly at the Methodist Church in Knighton.... 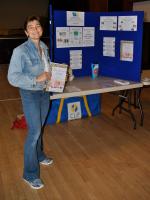 more We were kindly invited to have a Rotary stall at this busy event at the Knighton Community Centre.... 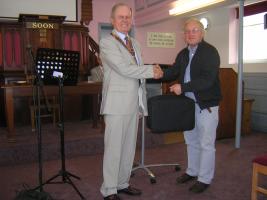 We support the Presteigne Job Club 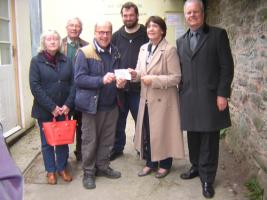 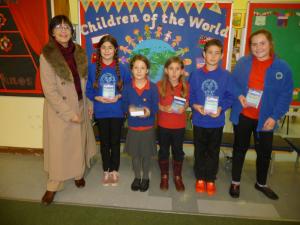 more to children from Presteigne Primary School to support their education about other countries. 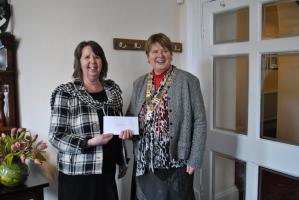 We support the Knighton Food Bank

more After a pleasant meal we were proud to donate £500 to this worthwhile charity. 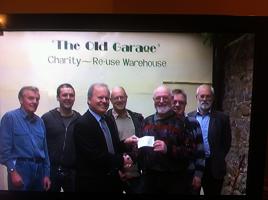 more The Presteigne and Norton Community Support has established new furniture recycling warehouse to offer support to their local community. 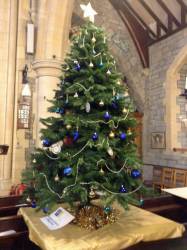 more Club member Patrick Smith presented a cheque for £200 to the group to help with the costs involved in providing support for a group of people suffering mental and health problems.

more We are supporting the Knighton and District Twinning association's visit to Varades with 22 students from the Knighton Primary School in the form of Junior French Dictionaries donated to each student.

more We fund an extractor fan for the Support Groups Furniture Barn in Knighton.

Village of the Year Competition

more Last Wednesday incoming President Cathy Jones presented District Nurse Debbie Evans with a cheque for £400 in support of the nurses LEG club based in Knighton.

more This charity provides respite and holidays for children with cancer

Tree of Lights for Kids Out Day 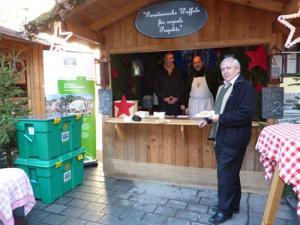 more This charity was the one chosen for 2009-10 and we are proud to be supporters. 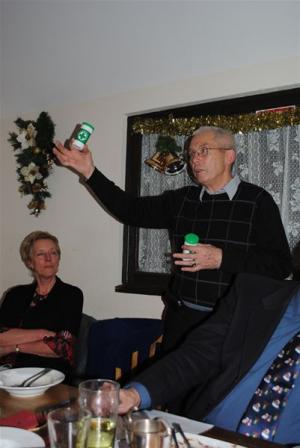 Message in a bottle

more The "message" in this project is the person medical and emergency contact details which can be kept in a bottle in the fridge. 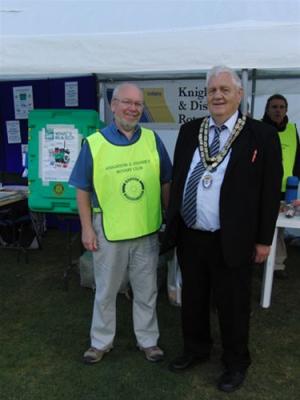 more As the last speaker for this Rotary year, Lesley Wootton will be updating us in the activities of the Knighton Community support project.

back We are keen to support local community based charities in whatever way we can.