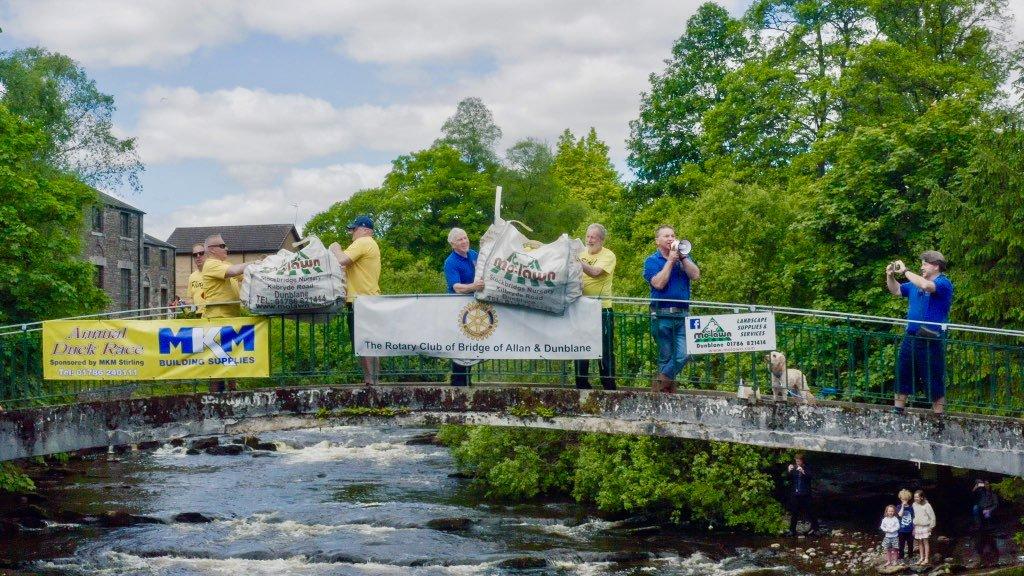 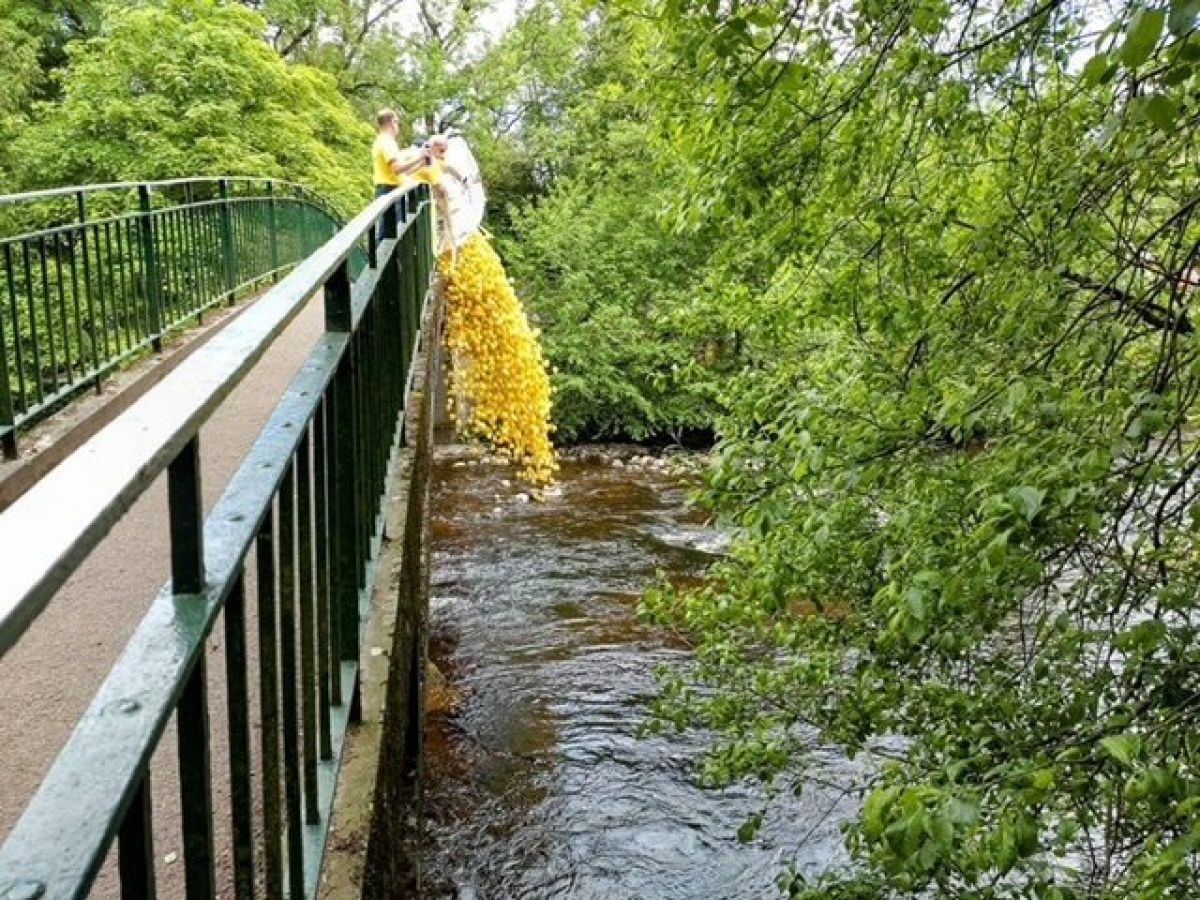 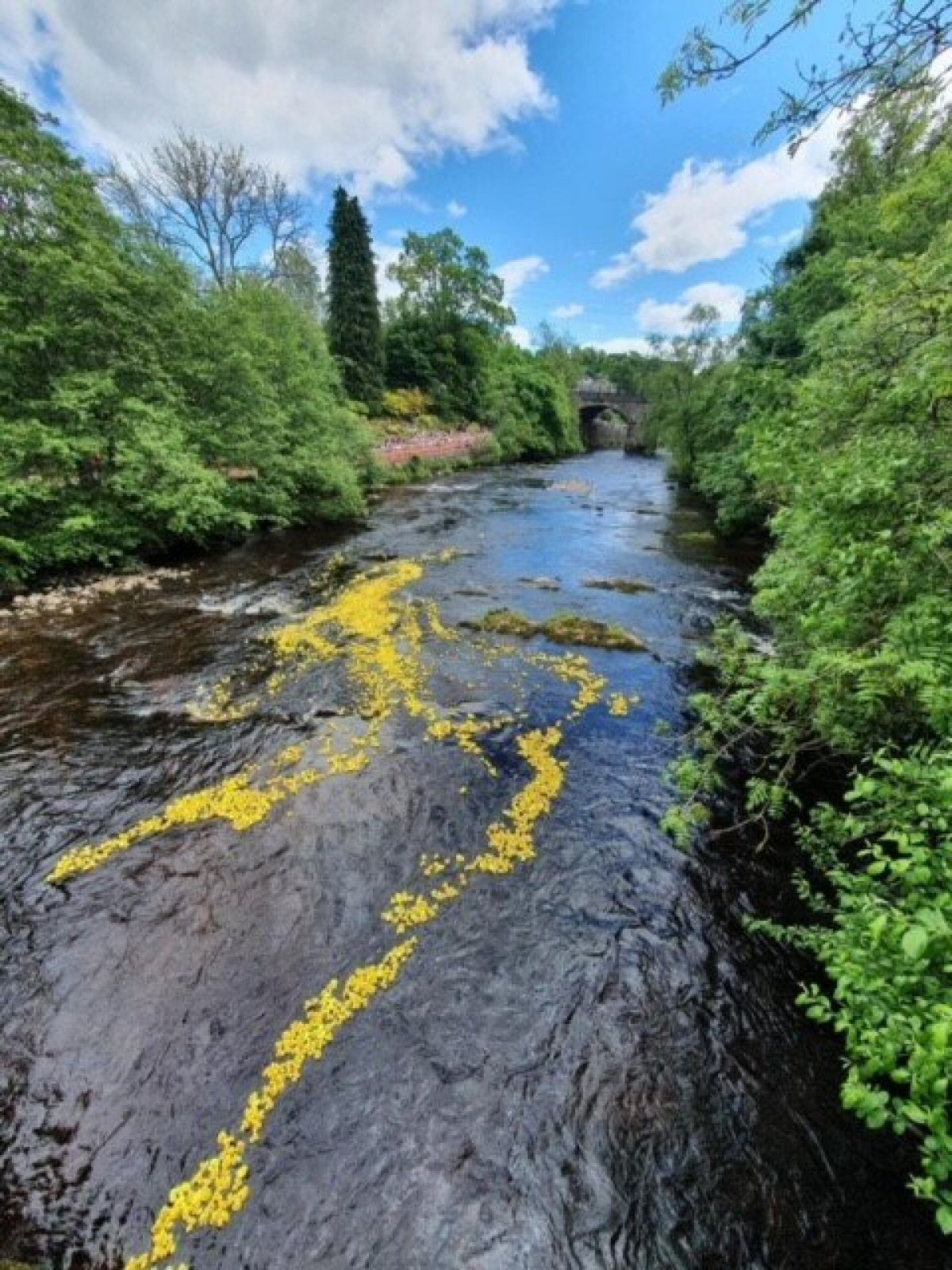 THE DUCK RACE AND FLING

Putting behind them two years of Covid restrictions, a huge crowd flocked to the Dunblane Fling including the Bridge of Allan and Dunblane Rotary Club Duck Race held on Saturday. Led by the Doune Pipe Band, a colourful fancy dress parade from the Railway Plaza to the Drying Green launched the event.  Blessed with good weather, and with entertainment from 12 noon to 4 pm, visitors were able to enjoy a wide variety of activities.

Inevitably, the highlight of the proceedings was the Duck Race. Precisely at one o’clock, over 5,000 ducks were released into the Allan Water from the Faery Bridge.  The banks of the Allanwater were packed with onlookers as the progress of the ducks was eagerly followed.  People who had purchased ducks and were hoping to be one of the twenty-five prize-winners looked on as the first ducks were gathered from the river.  As usual, the proceeds from the Duck Race, together with cash from sales of crêpes and refreshments in the Rotary marquee, will go to the Children’s Hospices Across Scotland(CHAS) and other local charities.

Throughout the day, there was a programme of entertainment to suit all ages and tastes.  These took place on the Live Stage, the Children’s Yurt and on the Green. Those on the Live Stage, included performances by the Liltin’ Lassies, the local Rubber Chicken Theatre, and Ross Brown the football freestyler.  In a marquee, Circus Sensible entertained with a range of acts.  At the end of the day, a tug of war generated a lively response from the crowd as the advantage moved from one team to another.  Elsewhere on the Green there was a range of stalls providing hot dogs, hog roast and pulled pork, and veggie street food, with a wide range of drinks also on offer, and with ice-cream particularly popular on such a warm day.  Together with these were stalls mounted by local organisations including craft stalls, Baked Dunblane, Dunblane Development Trust, Scouts, and Elaine Hopley who was giving information about her plan to row single-handedly from the west coast of America to Australia.