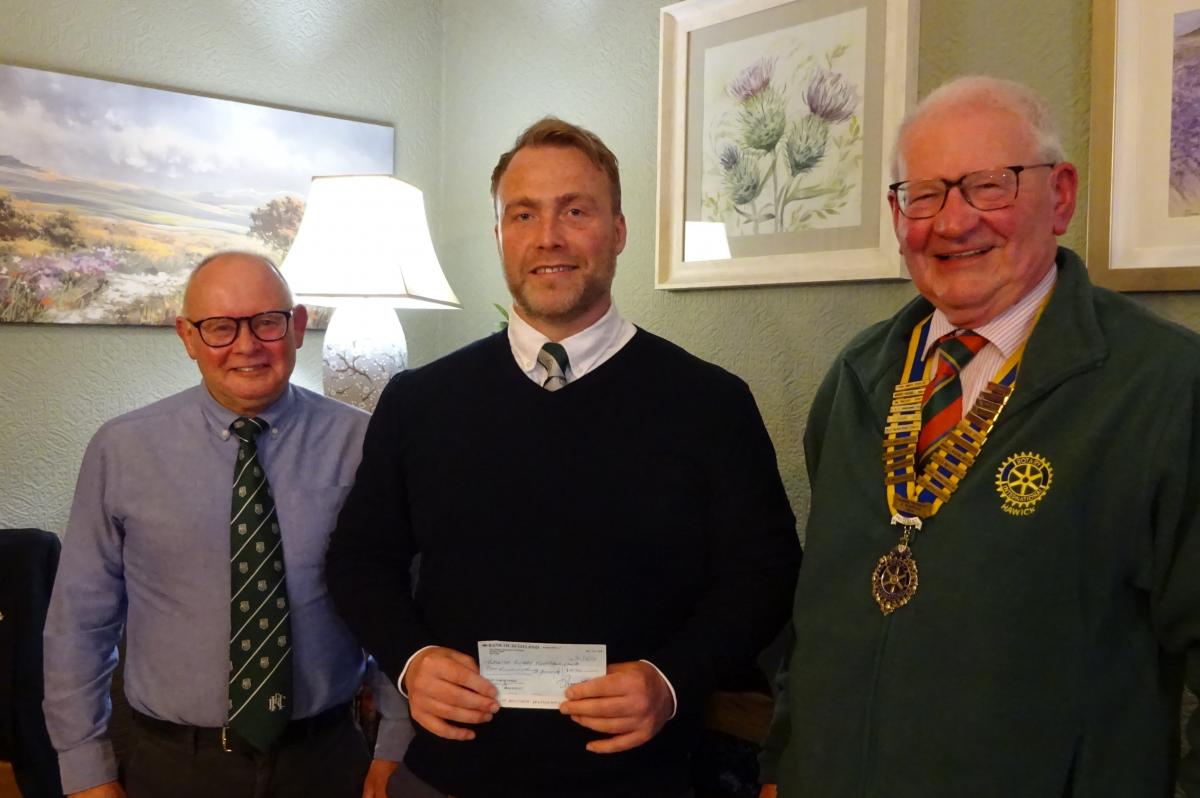 At last week’s meeting at the Mansfield Hotel, Past President Gus Neilson introduced Graham Hogg, Hawick RFC’s new Rugby Development Officer, who spoke to the club about that role and his career to date.

For a number of years Hawick were at the pinnacle of Scottish rugby, but Graham explained that this was sadly no longer the case due to many factors, including competition from other sports in the town, change in society, and change in the game of rugby itself, all leading to lower player numbers. So, in his new role as Rugby Development Officer for the town, Graham’s main aim was to change this.

He has tried to lift the profile of rugby by putting out as many positive reports as possible in the press and on social media, and by providing as many opportunities as possible for youngsters, both boys and girls of all ages, to engage in the game of rugby and above all to have fun.

A big part of Graham’s role has been the coordination and delivery of Cashback for Community Rugby events, working closely with diversionary groups and community police officers. These events (run Scotland wide) involve taking children from the most deprived areas and giving them the opportunity to engage in physical activity through rugby, while also socialising, learning about and being fed nutritional food and being taught skills in tackling anti-social behaviour in the community.

A huge achievement in Graham’s first year in the role as Rugby DO has been the successful re-introduction, after being disrupted by the Pandemic, of the Keown Trophy and Chrysties Quaich finals day involving primary school aged boys and girls. The tournament was set up 55 years ago by George Keown and is based on fun and running and passing rather than winning at all costs.

There were 37 girls partaking in last Friday afternoon’s games and Graham hopes to see more opportunities in the town for girls’ and women’s rugby, particularly since we currently have Women's International representation from Hawick in Lana Skeldon and Lisa Thomson.

From the positive and enthusiastic response, so far, from the young people in the town, Graham is certainly upbeat on the prospects of rugby growing again through the age groups and genders in Hawick in the future.

He made the point that successful player development very much depended on choosing the right coach. Ending his talk on a personal note, Graham said that the late and much admired coach Wullie Gray, was undoubtedly a huge influence on both his own playing and coaching career.

President Scott Elliot gave a heartfelt vote of thanks and the Club wished Graham all the very best for continuing success in his DO role. He was presented with a cheque for £430 as a contribution by Hawick Rotary towards that work, money raised as part of Ron Smith's Minto Challenge in August 2021.