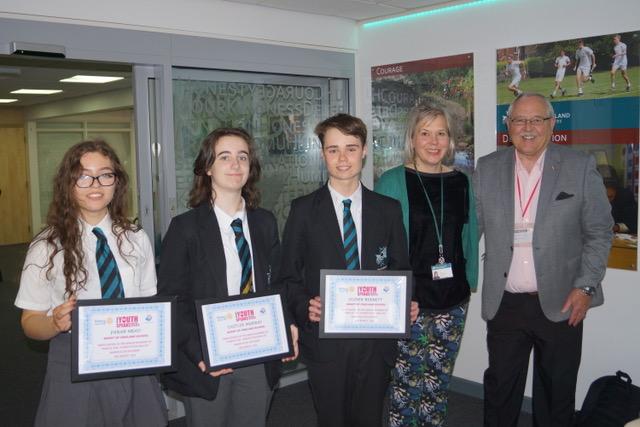 Every year Rotary runs several national youth competitions and events. The Rotary Club of Meriden has been part of the Youth Speaks Competition for a number of years. This is an event with a debating style format in which a team of three members, comprising a Chairperson, a Proposer and an Opposer decide on a motion to debate under strict rules and time keeping. It is divided into two age groups, Intermediate and Senior and clubs hold their own competitions to find a winner to go forward to a District Final. In the good old days before we heard about Covid the District winners would go on to a Regional Final and then a National Final but the last two stages have not taken place this year to avoid unnecessary Covid risks.

A senior team from Heart of England School represented our club at the District Final in Warwick after they had held an excellent debate in front of us at a club meeting in January. The Final had six Intermediate teams and seven Senior teams taking part. The standard of presentation and debate had to be seen to be believed. The public speaking confidence and logic of argument for people so young was incredibly high in all teams. A number of our club members went along to support them and the one thing we all agreed on was that we would not want to be in the judges’ position of having decide between them! However, we all felt that two teams had a slight edge over the others one of which was Heart of England.

The judges deliberated for quite some time before making their announcement and our feelings were correct. Heart of England was awarded second place and were presented with a silver cup. A couple of weeks later we received personalised framed certificates and some members visited the school on the last day before the students left for study leave.  President Charles Perry presented them personally. I think we all secretly wished we had that level of personal confidence when we were their age.

General information and announcements. Latest update on our meetings.

we support a range of youth activities locally