Iain Carter, the BBC Sport and Golf Correspondent, is our special guest for the evening. 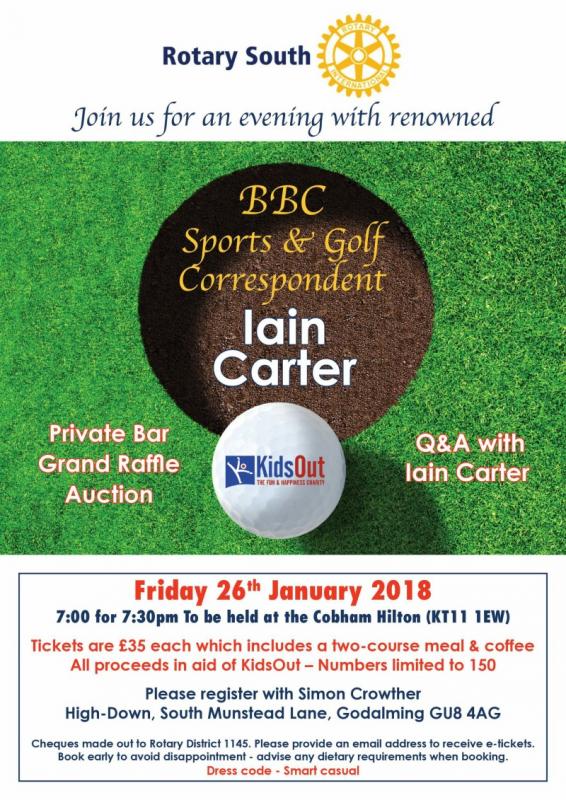 Iain Carter has been BBC Radio's golf correspondent since 2003. He can be heard on Radio Five Live as the lead commentator at all the major golf championships around the world, including the Open, Masters and Ryder Cup.

Iain's work brings him into regular contact with many of the world's leading golfers including Tiger Woods and Colin Montgomerie.

In the five years prior to taking up the golf job, Iain was the BBC's Tennis Correspondent and he continues to commentate at Wimbledon.

Iain has spoken at various charity golf days, has interviewed leading golfers like Nick Faldo at tournament sponsor welcome dinners and spoke at the Golf Course Managers' Association Conference at the The Belfry.

He has a fund of stories from nearly twenty years covering sport for the BBC. Iain's career began at Radio Leicester before moving to the BBC World Service where he toured the Caribbean and Southern Africa covering cricket. His first rugby union commentary was the small matter of the 1995 World Cup final to en estimated audience of 120 million! He still commentates on rugby during the Six Nations and World Cups.

After joining Radio Five Live, Iain covered Damon Hill's Formula One world championship victory in 1996 before moving on to tennis and golf. He lives in Surrey and spends his leisure time trying to cling on to a single figure handicap.