Angela was born in Glasgow in the mid fifties. Although now living in Renfrewshire she is proud to consider herself a Glaswegian at heart.

Angela enjoys volunteering and fundraising, walking and pottering about in her garden and greenhouse. Through COVIS she has developed green fingers! She has been happily married to Ian for 26 years. Ian is a retired HGV driver who enjoys bowling and gardening. And one of Rotary’s new recruits.

She is a Past President and a current Director of the Glasgow Business Club, a not-for-profit business club that connects, inspires and informs people from organisations of all sizes through our events, website and social media. She previously served seven years as the Club Secretary and was responsible for introducing many procedural changes over that period.

In June 2019 Angela became a Trustee of the Board Revive MS, a charity that is dedicated to the support of everyone living with multiple sclerosis.

Career from leaving school was with the RBS in various roles. Angela started up her freelance Virtual Assistance business in 2006 whilst still working part time within the bank. She took an early retirement from the RBS in 2008 to focus fully on growing the business.

Angela is now semi-retired and works freelance with The British Society of Medical & Dental Hypnosis as their virtual office manager. This involves working with their directors to manage the day to day running of the charity.

Angela fulfilled a long time wish of becoming a Rotarian in 2008. A friend asked her along to a meeting of the Barrhead club and it all started then. She has served as Club Secretary and Club President.

Angela acknowledges that her four year term as District Assistant Governor gave her the experience and foundation to climb the District Governor ladder.

Angela’s motto is simple – Treat others with empathy, kindness and compassion. You will feel better about yourself. 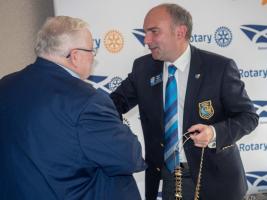 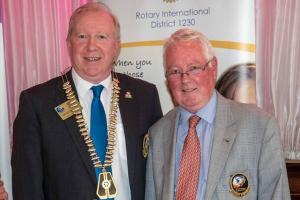 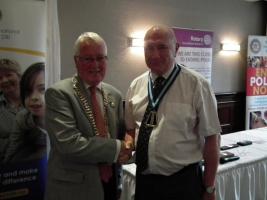