Rotary Growth Opportunities (Rotary GO) offer opportunities to form new types of clubs, Satellite, Innovative and Flexible and E-clubs.
Information on each of these types of club is given below. You can also download information from the Resources section.
If there is interest in your area for setting up another Rotary club, there is a team ready and able to assist you every step of the way, starting with your district governor and district extension (new clubs formation) officer.
To contact Iain, you can click on the link at the bottom of this page.

What is the purpose of the Innovative and Flexible Club Pilot Programme?
The Rotary GB&I Innovative and Flexible Club Pilot Programme focuses on clubs’ ability to self determine their operations to fit better with the needs of their members and the community.
What sort of things could we do?
The club could try out different meeting logistics (time, day, frequency, location, online, use of social media, club event or social activity, and so on)
How does this fit in with The Rotary GB&I Standard Constitution and Bylaws?
Clubs are authorised to make changes to the Standard Rotary GB&I Club Constitution and their By-laws in any area other than the Rotary GB&I/RI membership dues requirements.
Did CoL 2013 decisions make Rotary more flexible?
Many people need flexibility to become or remain involved with a Rotary Club. Following CoL 2013 more flexibility was given to attendance requirements so that members may now use service as part of the attendance requirements. However, members also like to keep in touch and instead of/as well as conventional meetings members can communicate through social media.
If a ‘traditional’ club is working well but not attracting new members what could they do?
Because people may now have tighter working hours those clubs which meet at lunch time may find it difficult to attract new members. The club could consider ‘additional meetings’ at time which is more attractive to working members. For example, in the evenings with or without a meal.
Could we have more than one meeting time in other circumstances?
Yes, it is for the club to decide how and when they wish to meet. It is perfectly acceptable to have more than one meeting time or location.
If clubs have more than one meeting time and location could one group split and form its own club?
The idea of a Satellite Club fits this situation. A Guidance Note is available separately. Generally, a Satellite Club will become a club on its own once it has gained 20 members whereas additional meetings will not be used to form a new club.
What is the difference between a Satellite Club and a Satellite Meeting?
At the start of the pilot these terms were used interchangeably. CoL 2013 approved the use of Satellite Clubs as a method of forming new clubs. To avoid confusion where a club runs meetings in addition to the regular weekly meeting these are probably best referred to as ‘additional meetings’.
Can we change membership qualifications and requirements?
Decisions at CoL 2013 also widened the membership qualifications as contained in Article 7 of the Rotary GB&I Club Constitution. However, it is up to the club to interpret the membership qualifications laterally and/or create relevant membership qualifications to meet the needs of the community.

E-CLUBS
E-Clubs – meetings are online and provide a valuable alternative to the standard Rotary club. Members of an E-club could be drawn from anywhere in the world and meet solely on line although there may be occasional face-to-face meetings between members.
Hybrid E-Club – The Hybrid E-Club has a lot of potential as it will cater for the busy person who does not have time to spend at weekly meetings but wishes to help others. Typically, the hybrid club has a membership, which is drawn from within a fairly limited geographical area close enough for members to meet say, once a month face-to-face and online in between times. This type of club would be ideal for the busy person who cannot spare the time to physically attend regular Rotary meetings and it would also cut down on the cost of being a Rotarian.
There are always people who are looking to join Rotary if only they were asked. If they are too busy to join your club or cannot make your meeting times, suggest they consider helping to start a new club where they can influence the way it is run and how it meets. 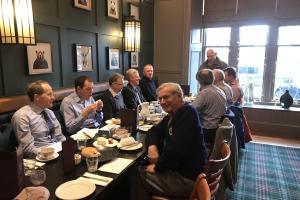 How to become a Rotarian