Party nights in the Glen Pavilion 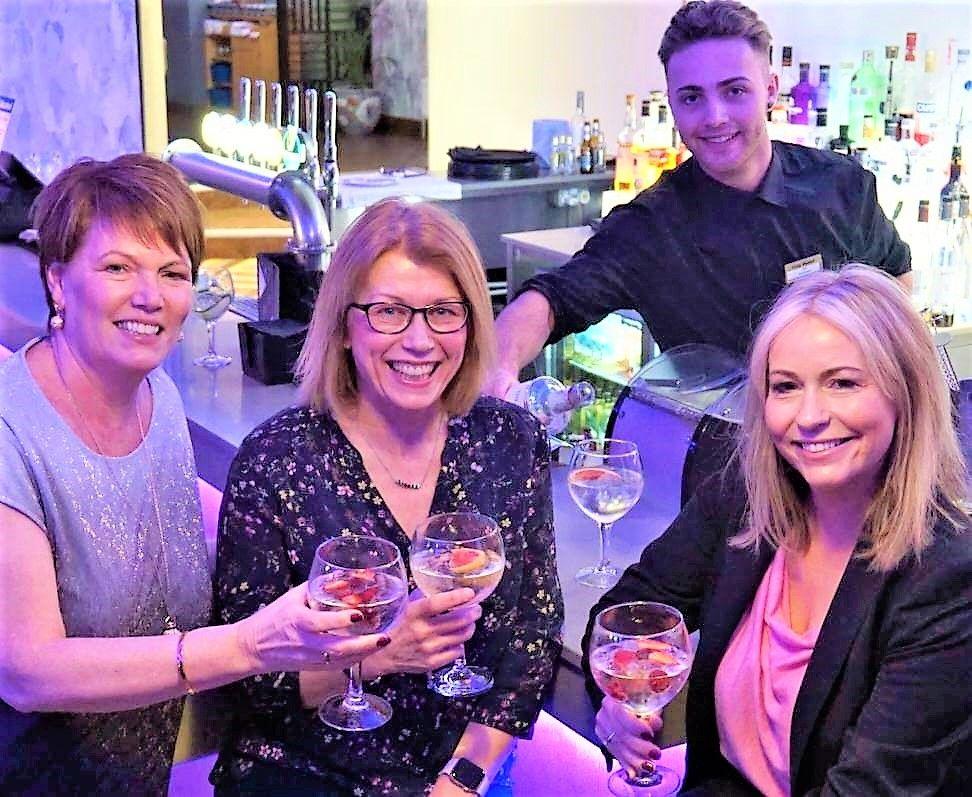 DUNFERMLINE Rotarians are being schooled in the arts of gin dispensing as they prepare to get hundreds of party-goers in the charity spirit at Dunfermline’s new Gin Festival on 10th and 11th May in the Glen Pavilion.

And passing on tips from barman Joshua, of the City Hotel, will be the wives of three of the event’s principal organisers –from left, Margaret Steedman, Helen Doran and Lyndsey McCran.

Well over 500 tickets have been snapped up in advance sales in the countdown to the two party nights, which will mix a heady cocktail of gins, beer, wine, prosecco and live music in the club’s principal fund-raiser of the year for local charities.

Already three-quarters of the featured craft gins have been sponsored, pouring a four-figure sum into the GinFest coffers. Select labels, including Isle of Harris, BrewDog Lone Wolf and Electric Spirit Company, will be among the offering of least 40 gins, mainly from small distillers whose labels are not generally available in pubs and supermarkets.

Conceived as a spring complement to the Round Table’s autumn beer festival, GinFest is being launched to set the scene for the Rotary Club of Dunfermline’s centenary celebrations in 2022.

The £15 ticket buys entry to the event, a gin glass to keep, a first drink and a programme with full details of all the available gins.

Tickets are available for advance uplift from Malcolm, Jack & Matheson offices in Walmer Drive, East Port, and will also be available on the door on the nights. The link to the event’s online ticket shop is: https://www.jumblebee.co.uk/dunfermlinerotarycharityginfestival2019

DUNFERMLINE’S new Gin Festival -  to be held over two party nights in the Glen Pavilion on 10th and 11th May – is the latest fund-raising innovation to be launched by the as it prepares to toast its upcoming centennial.

Organisers hope that as well as providing a tonic for the club’s charity trust fund, the GinFest will be a successful social mixer…featuring a heady cocktail of at least 40 gins, mainly from small distillers whose labels are not available generally in pubs and supermarkets, together with beer, wine, prosecco and live music from Cut the Cake and The Copycats.

The £15 GinFest ticket buys entry to the event, a gin glass to keep, a first drink and a programme with full details of all the available gins. Dunfermline-based Thomas Cooper Accountants have pledged their support as glass sponsors.

Retired Royal Navy captain , who will be succeeded as president by in June, explained, “We are already well into preparations for our centenary in 2022. We have secured the presidential succession to beyond our centennial, and continue to build up a five-figure sum for charitable giving to mark our milestone anniversary and create an appropriate legacy.

“However, the club is not content to rest on its historic laurels. The inaugural GinFest is only the latest in a series of innovative fund-raising initiatives we have introduced to fulfil and refresh our Rotary mission as we prepare for the challenges of our second century.

“At Christmas, we launched the highly successful Santa Dash when scores of Santas dashed down ’s High Street as a novel curtain-raiser to the switch-on of the city’s Christmas lights and on 23rd April we are staging a new charity golf invitational scramble, to be played annually at Dunfermline Golf Club’s Pitfirrane course.

“We are also working with local schools in a wide variety of youth projects in addition to raising significant funds in aid of local, national and international deserving causes.”

* Tickets are now available, for personal uplift, from Malcolm, Jack & Matheson offices in Port. or Click here to buy Tickets.