Exmouth Rotary welcomes you. Discover more about us by scrolling down and/or clicking on the links above. 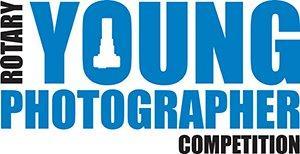 Our talented Exmouth students have submitted superb photos. Click below to see them. 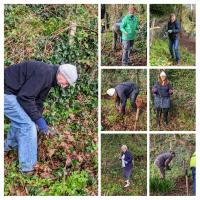 We are helping Withycombe school with their new hedge project. 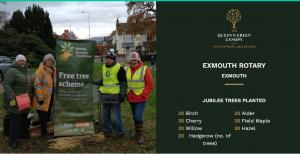 We hosted a tree planting hub in November and we are pleased to feature on the Queen's Green Canopy map.

Exmouth Rotary has been formed in 2021 by the merger of The Rotary Clubs of Exmouth & District and  Exmouth Raleigh.

Through this merger we now have a membership of around 25, both men and women, We meet every two weeks on a Monday evening for a meal, for companionship and to plan future activities. On other weeks we often take part in other activities, both charitable and social. We always have a full programme of charitable and social events that take place throughout the year. We support local, national and international charities with emphasis on those in the Exmouth & Budleigh Salterton area. We also support the global Rotary charity, called Rotary Foundation, which has been successful for many years with such initiatives as the "End Polio Now" programme. We are always ready to respond quickly to emergencies and natural disasters anywhere in the world. In some cases this response takes the form of the funding of one or more Shelterboxes to provide much needed help to those directly affected. You will often see us on the streets of Exmouth doing our bit to improve the lives of people who are less fortunate than ourselves.

Whilst doing charitable work is both rewarding and commendable, companionship and fun are also important aspects of Rotary, so we usually have a dinner together on club evenings and hold a wide variety of social events for our members and their partners. In brief our members have great fun while supporting a huge range of charities and worthwhile causes.

We will update this web site to provide news of upcoming events and other projects and to invite as many as possible to become involved.

If you have any questions for us then please use the "Contact us" link at the bottom of the page or email us at exmouthrotary@outlook.com 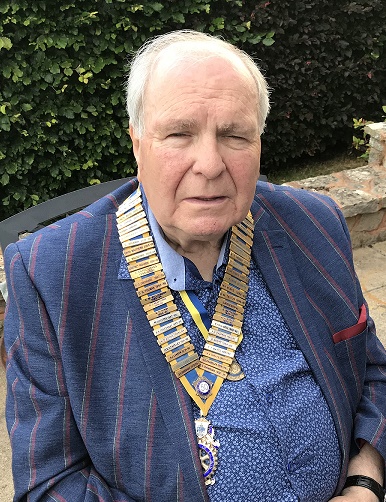 Originating from Kent, David spent most of his adult life working in the education sector in Hertfordshire. David joined Rotary with the Elstree and Borehamwood club in 1992. During his time with that club he served as president twice, once during Rotary’s centenary year. David moved on to the Rotary club of St Albans before he and his wife moved down to Devon where their daughter was already living.

Back in Hertfordshire David was a volunteer for the local talking newspaper for 36 years. Originally, he was a reader and later became an editor, first gathering magazine articles and then news items, spending 15 years as the chairman. In 2013 he set up the VIC, the Visually Impaired Club. Riding on the backs of the team of volunteers who worked for the visually impaired, he was nominated to attend a Royal Garden Party.

We were delighted to welcome David into Exmouth Rotary and more delighted still when he agreed to take up our Presidency for 2022/23. David has signalled that he wants the club to be outward looking and community minded, but always remembering that we are members of Rotary International.

David has expressed his wish that our club continues to support ShelterBox and he is passionate about maintaining - and strengthening - our support to easing the plight of the Ukrainian people, working with and alongside other groups in our community to support refugees who arrive here.

Also, David wants there to be a strong Rotary presence in Exmouth and through this means to strengthen and re-energise our existing club by applying the motto of District Governor, Michael Champion: Engage, Enthuse and Enrol.

At a talk to Exmouth Rotary in autumn 2021 about the work of Exmouth in Bloom, President Christine mentioned that the club had 300 purple crocus corms needing planting fpr the 'Purple Against Polio' campaign. The Sensory Garden on the seafront sprang to mind as the perfect place, so volunteers Marion Drew and Graham Bell from Exmouth in Bloom, and Gillie Newcombe from Exmouth Art Group, joined Rotary President, Christine Peacock, to get the corms planted. We look forward to a lovely show come the Spring.

Committee Meetings - during the week

Committee meetings during the week, usually at the home of one of the committee members or via Zoom

(Club business and speaker meetings are usually the second Monday of the month, but see "Happening soon ..." on RHS for latest details.) The Imperial Hotel, Exmouth

Get the Rotary Club of Exmouth app!