It is now five weeks since Haiti was rocked by a catastrophic earthquake and there is still an urgent need for secure shelter which can stand up to the Haitian climate. 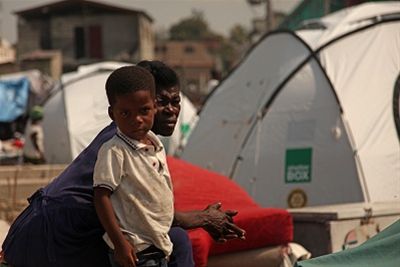 ShelterBox Response Team (SRT) member Jane Nash has just returned from Port au Prince. She says the importance of getting people into tents cannot be underestimated.

'The rains are going to be really hard and it is going to take a long time to get transitional housing up and running. Our tents will withstand heavy rain. Would you want to be in a tarpaulin sheet in a torrential downpour when the ground will be soaked? The look on one woman's face when I gave her a tent was like it was the best thing she had ever had, 'said Jane.

ShelterBox General Manager Lasse Petersen, who has also just returned from Port au Prince, added: 'At present the vast majority of people left homeless have yet to receive even plastic sheeting. These families need immediate emergency shelter rather than becoming caught up in policy debates.

'A tent, as we've already seen, can be a life saving difference to many of the most vulnerable during what is likely to become a very lengthy wait for anything more permanent. It's vital we continue our efforts in Haiti; tents are the number one priority.'

So far, more than 7,000 ShelterBoxes and disaster relief tents have been distributed in Haiti and another 1,200 are due to arrive in Port au Prince, Haiti's capital, by Friday. The SRT in Port au Prince already has a planned distribution in place for these boxes.

ShelterBox has committed another 5,000 tents to Haiti, which will provide shelter for another 50,000 people. These will start arriving at the end of February. ShelterBox tents undergo rigorous testing and will be able to stand up to the spring rains which will soon descend on Haiti.

On February, Tuesday 16, SRT members Mike Greenslade (AU) and Dave Ray (UK), who are in Port au Prince, worked closely with community leaders and the Red Falcon, US 82nd Airborne to distribute 180 ShelterBoxes.

Mike said: 'We could not have achieved a safe distribution without the 82nd Airbourne. The soldiers of Red Falcon ensured that boxes went to the most needy in the camp.

'Conditions in the camp are amongst the worst I've seen with people living cheek by jowl, camping out on piles of rubble, surrounded by rubbish and rotting waste. In this space people have to wash, cook, eat and sleep, many with no more than a bed sheet for overhead cover.

'This picture is replicated throughout Port au Prince and the outlying affected by the quake. There are not enough tents to go round and the consensus is that when the rains come we will have a second emergency on our hands.'