Most of these notes are taken from “A Short History of The Rotary Club of Durham” published in 1998 to mark the 75th anniversary of the granting of the Club Charter.  The History was prepared by Past Presidents Alf Harold, Laurie Turner and the late John Heron; their work is acknowledged with thanks.
In his introduction to the History, the then President Gordon Mitchell said “While many of our activities are visible and public, much of our community, national and international service is performed quietly and out of the public gaze and deserves to be recognised.”  This is as true today as it has always been!

Rotary came to Durham in 1922 largely through the initiative of W.R.H. Gray (Gown Maker to the University of Durham).  The Club held its first meeting in the County Hotel, Durham, on 5th December 1922 when 19 people attended.  At this meeting Dr. A. Robinson (the then Master of Hatfield College, University of Durham) was elected President.  The formation of the Club was sponsored by the Rotary Club of Newcastle upon Tyne.  When the formal application was made for membership of Rotary International on 21st February, 1923, the membership had grown to 25.  The application was approved on 18th April, 1923, by which time the membership of the Club had grown to 35 – early indications of a healthy and popular organisation.

Early charitable activities were limited, donations being made to the “Police Boot Fund for Poor Children” and the “Samaritans Nurses Society”.  By 1930, a regular event was a dance to raise funds to assist the children in Durham County Hospital.

During the second world war, the Club provided rest room and refreshments for members of the armed forces returning home on leave.  A rota of car owners provided them with lifts home when there was no public transport available.

The wives of several members of the Club joined together to form the Inner Wheel Club of Durham in 1944 and we continue to work closely together.

On the 13th April, 1973, a Grand Banquet was held in the Great Hall of Durham Castle to mark the Golden Jubilee of the Club Charter.  Among the guests were the Mayor of Durham, Past President of Rotary GB&I the Rev. D. Dick,  District Governor H. Botham and presidents of many neighbouring clubs.  A highlight of the occasion was a fanfare blown by the trumpeters of the Ushaw Moor ACF from the minstrel gallery of the Great Hall to summon the diners to table.  It was an evening that will be long remembered by those present.

As a result of procedural changes introduced by Rotary International in 1975, it became possible for more than one Rotary Club to be formed within the same geographical area.  This enabled the Club to sponsor the formation of the Rotary Club of Durham Bede early in that year.  The Club was also responsible, in 1977, for establishing the first Probus Club in the city.  This was so successful that a further two Clubs have since been formed.

From the Peart Archives

From the Archives - the Lectern

From the Archives - Membership & Communications

From the Archives - Some Speakers and their Topics

Restoration of the President's Chair 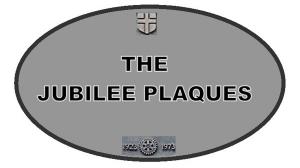