The Rotary Foundation is Rotary International's charity fund and is one of the largest charities in the world. All Rotarians contribute to the fund which is fully funded by the interest it raises on a rolling three year programme.

The Rotary Foundation is Rotary International's charity - collecting contributions from Rotarians and supporters around the world and using these to support the work of individual clubs.

The mission of the Rotary Foundation is to

The grants and programmes available to Rotarians enable them to realise Rotary's humanitarian mission throughout the world including its number one goal - eradicating polio.

To eradicate polio, Rotarians have been mobilised by their hundreds of thousands. They are working to ensure that children are immunised against this crippling disease and that surveillance is strong despite the poor infrastructure, extreme poverty and civil strife of many countries. Since the Polio Plus programme's inception in 1885, more than three billion children have received the oral polio vaccine. Polio is now only present in two countries worldwide but the problem requires constant vigilance. There are only two countries now subject to rare cases of polio and the joint authorities across the world are unified in the fight to complete the job.

Rotary's US$200 million challenge is Rotary Foundation's response to the two grants totalling $365 million from Bill and Melinda Gate's Foundation to help eradicate polio. Every dollar given to Polio Plus will be counted toward the $200 million match to be completed this year.

Our educational programmes sponsor the largest  international scholarship programmes in the world. Scholars study in a different country, where they serve as unofficial ambassadors of goodwill. Since 1947, more than 47000 scholars from 110 countries have received scholarships of more than $476 million through the Rotary Foundation.

In addition Group Study Exchange (GSE) awards are made to Rotary Districts to cover the expenses for a team of non-rotarians from a variety of professions to undertake a four to six week itinery of vocational, educational and cultural points of interest in another country. Since 1965, more than 57,000 individuals in 12000 teams from 100 countries participated at a cost of $92 million.

There are different forms of Grant available to help clubs in their work and the Louth Club is constantly searching for opportunities to use the money in the local community. 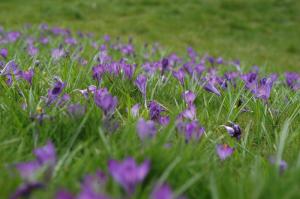 more Purple crocus planting in support of the eradication of polio across the world.